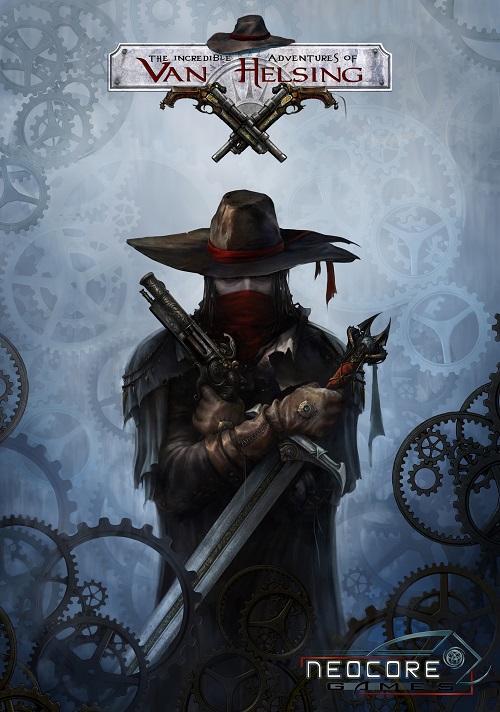 Van Helsing's adventures are pretty incredible, now we aren't talking about Hugh Jackman, no, we're talking about the gothic-noir steampunk action RPG from NeocoreGames, an independent studio who had stuck by the strategy genre for too long, and finally it's their time to shine, making what they've always wanted.

The Incredible Adventures of Van Helsing begin when a letter from Borgovia arrives for the legendary Van Helsing, unfortunately he's past his prime and far too old for adventuring, so his son goes in his place alongside Katarina; a ghost bound to serve the Van Helsing family after she was saved by his father. Fighting all manner of beast and man the two journey to Borgovia to stop an unholy evil that is spreading throughout the land.

As an action RPG, The Incredible Adventures of Van Helsing follows the standard scheme of click, click, click, however your keyboard gets some fun too, and as you would hope there are a variety of hotkeys that allow you to interchange between as many mana based weapon skills and spells as possible, the system works wonders as soon as you remember which icon represents what, because a few of the weapon abilities look very similar. That's not all though, because if you don't want to use your mana based attacks you can intensify your bog-standard attack with the rage system that builds up in strength as you go about your business, -the business of killing monsters that is- the rage system allows you to claim that final bit of health left on a boss that your standard attack just couldn't muster by doubling the strength of the attack, or adding a bit of fire. Your precious rage points are often the difference between the death of your heroic character and survival, and passive perks unlocked later on in the game, make using them a godsend. 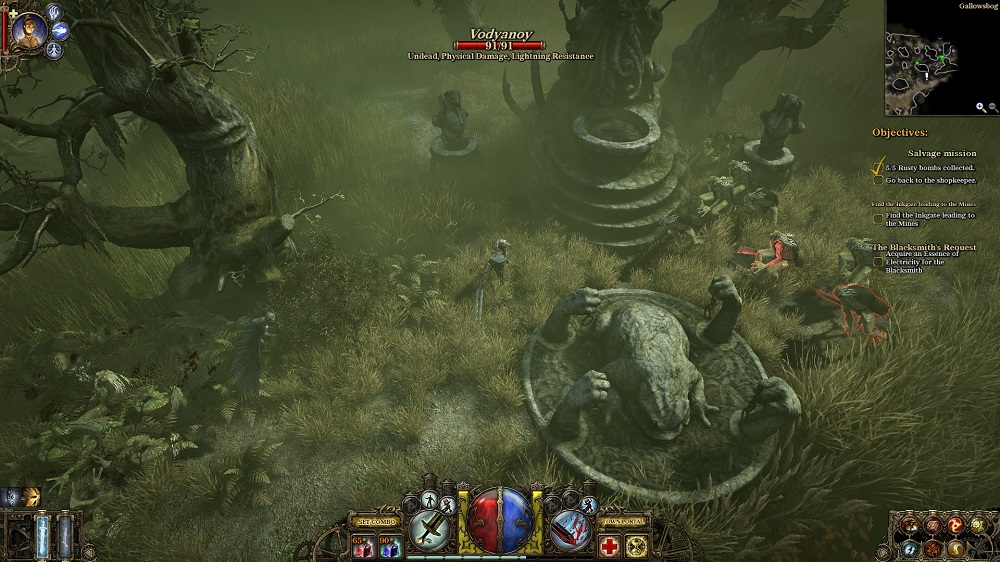 Unlike most ARPG's you won't be able to change Van Helsing's class, after all, demon hunters are pretty set in their ways, what you get instead is a broad set of skills for close quarter swordplay; Mystic Warrior and ranged gunfire; Occult Hunter, of course each comes with a splattering of magic for that little extra pizazz. Unfortunately this does mean that you'll quickly pick a favourite of sword or guns and pretty much stick to it, otherwise you'll never really unlock the best attacks from the bottom of the skill tree, and you can't have the best of both worlds! That said, if you do decide to change your skillset there are NPCs that will respec you for a little money.

To add a little spice into the mix, Van Helsing also offers the reputation system, this unlocks perks as you progress through and allows you to learn a single perk as your reputation increases, some of which are one-time bonuses like extra skill points, or catered to a specific weapon set like extra damage when your target is a certain distance from you, they work similar to Fallout 3's Perk System, and just help to make that little bit of a difference.

However if you ask me, there's nothing better than a fully experienced Occult Hunter; a pleasant mix of long range weaponry and magic allowing you to pick off shots at your enemy before you run away as they get a little too close for comfort. A great part of Van Helsing is that your enemies are so varied, granted you will encounter a lot of very traditional creatures like werewolves that just want to rush you, but as you progress you'll need to work against gun turrets, the explosive Igor's or the Strongmen that just want you to get over and have a hug! Each monster has its own unique tactics to use against Van Helsing which you'll need to counteract in order to get them down fast, and the real variety is a great aspect of the game. 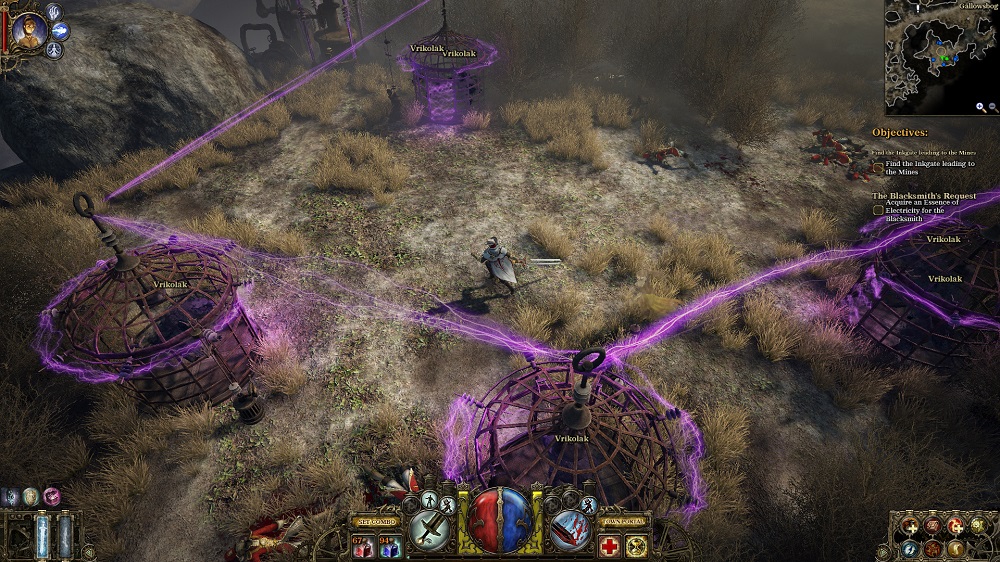 You won't simply be taking out groups of standard enemies, and there's a selection of boss encounters with great hulking monstrosities simply awaiting your arrival like your final showdown with the Doomsday Automaton or the terrifyingly spindly Scarecrow in the forest of Croakwood, each boss, like smaller enemies have their own tactics, so whether it's taking out towers for a chance to attack, or simply wiping out respawn points so that you can simply get a shot in on the boss, the variation is key, and we can't stress how enjoyable it is to not be expected to simply click, click, click every enemy.

In our preview of Van Helsing we stuck to Markovna and the woods and swamps of Croakwood, full of creatures all strongly rooted in eastern European folklore such as the Vrikolak, Vodyanoy and the Rusalka, these aren't simply ideas drawn up in the mind of some game designer, and it gave the game such a beautiful and exotic identity to those Westerners that care to look up the curious names of the beasts you slay, but wait, isn't this a steampunk game? Well what makes The Incredible Adventures of Van Helsing so entertaining is it's a game of two halves; the first of which follows the traditional Gothic horror of Van Helsing; werewolves, the undead and the like, but gradually aspects of science creep in; animated tin soldiers, werewolves controlled with lightning charges and mad scientists.

It's not just the monsters that relate with the game's themes, even the smallest touches are thought of in Van Helsing, this is not just a rushed out, low budget Action-RPG hot off the release of Diablo III, everything was thought of when creating this lavish steampunk universe, including the game's HUD, full of pumping vials and clockwork cogs that fully encompasses the game into its luxurious universe, that we were so sad to have to leave. 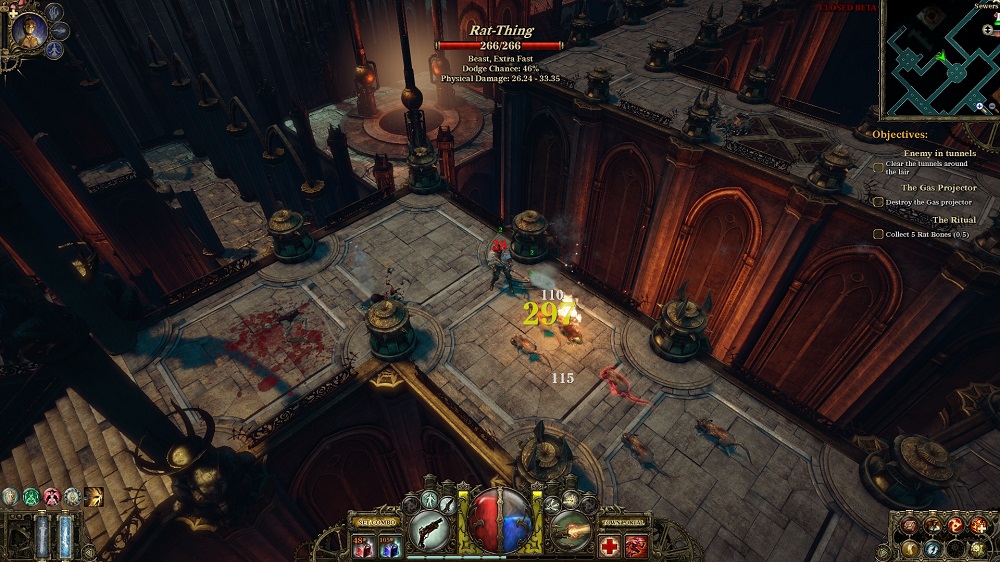 Van Helsing is about as traditional as most action RPGs come, however there is one very important difference that stands it out from the crowd; the elder Van Helsing was a man of many secrets, and one of those was an underground lair below the heart of Borgovia, luckily enough the place still stands, and a group of friendly chaps have took up residence, as members of a resistance against the unholy science you couldn't ask for better neighbours, especially when you manage to locate yourself an engineer. You see, as much as your father liked to think he lived a secretive life, there's not many out there that don't know the location of his 'secret' lair, and so you'll have the ability to protect it from nasty intruders on a couple of occasions in an active tower defense style situation. Well you don't necessarily have to play it like a tower defense, but it is very refreshing to watch waves of rats and monstrous creatures as they walk into spike pits, flamethrowers and friendly guardians.

One particularly welcomed feature to the game is its co-op system, however unfortunately -apparently to stop cheating- Van Helsing's cooperative mode works outside of the single player aspect, this means that you can't simply take your level 30 Van Helsing and Katarina to hunt demons and such. So if you felt a little anti-social when you created your character as purely offline, you'll have to create a new one if you wish to play with up to four of your friends, allowing for eight simultaneous hunters together to bash out some old fashioned slaying, only problem is, it'll last as long as your single player campaign, because monsters don't respawn, however for this reason NeocoreGames have released scenario mode that allows you to fight higher level monsters across a selection of areas. There have been quite a few issues getting online with others; however I didn't come across too many difficulties myself.

One element to keep your spirits going as you slog through the unholy forces of science is your companion Katarina whose wise cracks and sharp wit help break the ice of any situation, unfortunately Katarina's purpose always seems to be that of serving Van Helsing, granted this is her sole purpose of remaining in her non-corporeal form, but it would have been nice for her act as more of a fighting companion and less of a maid. She does have a couple of good attacks to speak of, but pretty much everything else of hers aids Van Helsing, from taking damage in his stead to buffing his defence, attack or luck. The latest DLC expansion Blue Blood looks to rectify this to a certain extent, but you can't help but feel this fantastic character is being somewhat underused as a true companion, and not just a lapdog to aid her master. 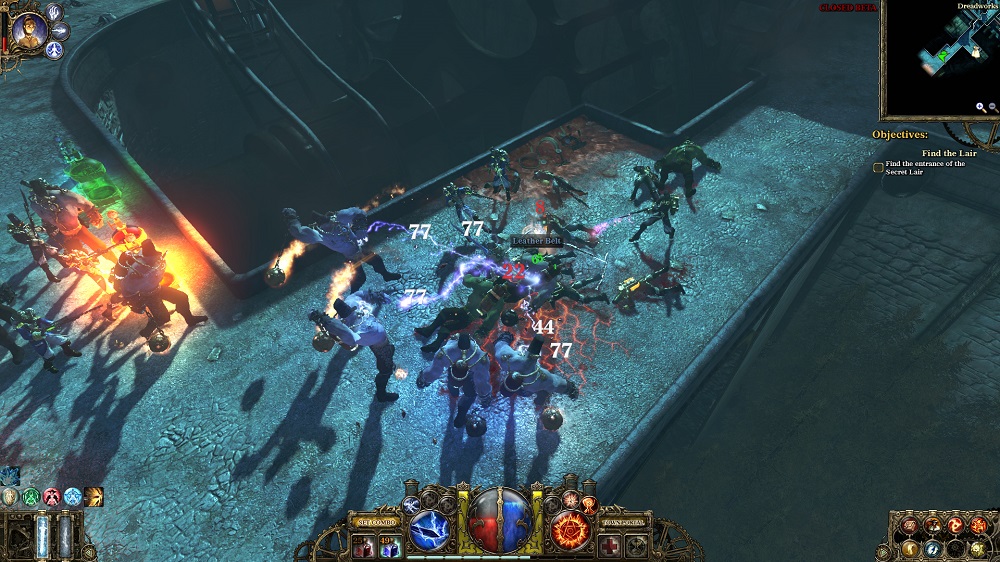 When you do finally reach the great metropolis of Borgovia, it's not quite how our heroes remember it; bastardised by the unholy sciences, the once great city has fallen to ruin, there you'll encounter all manner of machinery and scientific experiments gone awry, all driven by the almighty scientist Fulmigati who had surely gone mad with power. Coincidentally your arrival in Borgovia also marks a very potent change in the game, no longer is your journey riddled with mythical beasts of old tales long passed, in Borgovia you stand up against the future; the robotic machines, and they'll come at you in droves relentlessly persistent, as fitting as it may be, your journey starts feeling a little less personal, and this third of the game just doesn't have the same feel to it, or maybe I'm just a stickler for a bit of Gothic Horror.

One of the best aspects of The Incredible Adventures of Van Helsing is its ability to suck in pop culture. Playing through a quest is like watching an episode of Buffy; you just never know what they'll make reference to next, if it's not Monty Python and the Holy Grail it's the significance of the number 42, some players may find this annoying, buts it's the mark of a game made by a studio that are really invested in what they do, in crafting a game, and its dialogue to their world. Although we must say that the final showdown featured a few too many one-liners on repeat, more than we could stomach, even if they do spin on some absolutely classic lines.

The Incredible Adventures of Van Helsing is testament that even the little guys can make an Action RPG to contend with the likes of Diablo, it may have its faults including a camera that often works against you, and some may not find the skill trees as varied as they like, but what it delivers without a doubt is an impeccable world full of strange characters and beautiful monsters.

The Incredible Adventures of Van Helsing is out now for Windows PC for the stunningly low price of £11.99, there's even a free DLC pack already available as well as the recently released Blue Blood pack that adds a little oomph to Katarina.