Step into the shoes of Kate Wilson, a systems engineer aboard the Queen of the World, a monstrous ship that hoped to survive the Great Population Flood of the mid 21st Century, with a strange Scottish accent and her computing skills you’ll find yourself stealthing around decks and elevator shafts as you attempt to regain control of the great ship that has been overrun by terrorists. 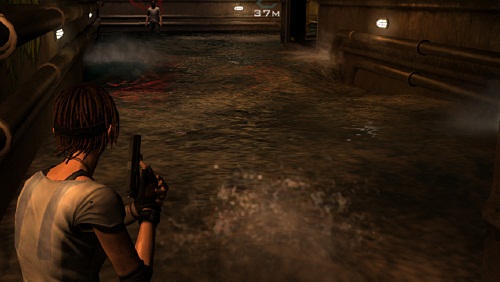 What is great about Hydrophobia is the constant sense of urgency instilled throughout the game. From the very first breach of the hull and flooding of the ship you will find yourself running around like a headless chicken whilst you complete your objectives against the natural odds through the constant fear of rising water. Coupled with the very obvious distinction between Kate and the terrorists' gun skills, Hydrophobia ensures that no matter what you are doing, you are always on edge.

When it was originally announced Hydrophobia was set to be a survival horror against natural elements, almost like SOS Final Escape, we were promised realistic water in environments that would be in a constant state of change, we do have this, and it is pulled off so very well. However the Malthusian -the terrorists- were then introduced, which doesn’t necessarily detract from the game, but cheapens it in a sense by relying on the need for a physical enemy to attack, rather than present water as your sole mortal enemy.

Hydrophobia has two basic features that the game works around; your use of the environment, and your reliance on your Mavi; your handheld computer which is not your average chocolate teapot, rather so you will come to rely on it when it comes to hacking control panels and computers, as well as for ‘looking’ through the lens of CCTV cameras, finding ciphers and unlocking doors, your Mavi will see more use than most 'gadgets' in games and it is integrated very well into the game. 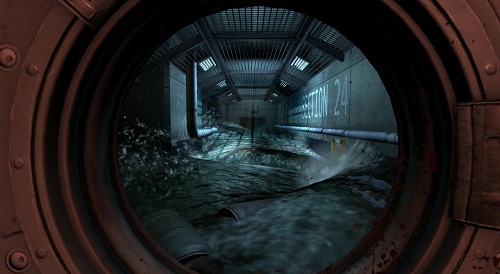 The real letdown of Hydrophobia is in its play time, the game itself can be finished in an evening if you are hammering it, and will only 3 acts there is little to the title. In addition to this, the water navigation is really fiddly like in most action platforming titles, and the movement is not the slickest system in the world of gaming.

The combat system in Hydrophobia whilst inspired is slightly clunky, and the enemy's constant literal 'pew pew' of their guns is particularly distressing in a game where the enemies are one of the main focuses, and it does feel like they are tacked on with little thought to sound design. If you choose to forget these discrepancies however the game really comes about when you realise just how much of the environment you will need to use in order to overcome your foes. Whether you are shooting out doors to effectively drown your enemies with torrents of water, or knocking cables down on them for a sneaky but effective kill the use of your environments greatly compliments the game, and without such a system the game would be your sub-standard third-person action title.

What is perhaps strangest about Hydrophobia is that there is something about it that just reminds you of old survival horror titles like Enemy Zero, or Overblood from the Saturn and Playstation 1 era. However the water is so beautifully integrated within the game, and Hydrophobia has the most impressive water engine ever to be seen in a game, it is just a real shame that the rest of the game feels like it needs to catch up with the tech. 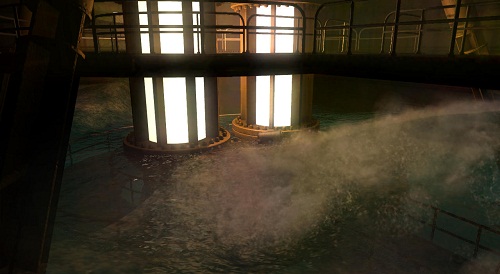 To further enhance the replay value of Hydrophobia there are medals and a collectables system that can be found throughout the game, the medals are easily obtainable, with a few present for the hardcore collector in you. The added Challenge Room that is unlocked after completing the game, allows you to destroy wave after wave of Malthusian in an extremely effective and fun way, and is possibly the best part of the game.

Whilst somewhat flawed Hydrophobia is a strangely alluring game, with a beautifully made water engine and the effective use of your environments as your main weapon it is definitely a lot better than some of the titles available on the Xbox Live Arcade. Without a doubt if if you are into your action titles, check out Hydrophobia.

Hydrophobia is available now exclusively on Xbox Live Arcade for a lower price of 800 Microsoft points, if this review hasn't swayed you, check out our updated opinion on the game after it's complete overhaul in Hydrophobia Pure, but an interesting and well crafted game, and if you don't have an Xbox 360 keep your eyes peeled, there is a PC and PS3 version in the works.