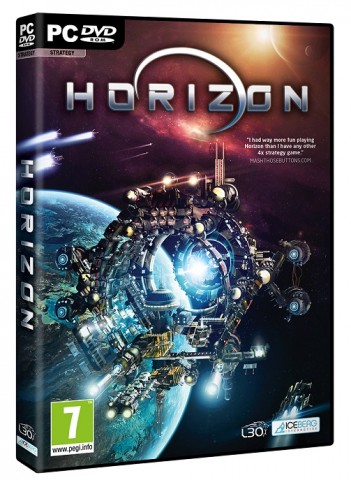 There's definitely a trend of 4X strategy games trickling out of the woodwork, more prevalent than most is those set in the glorious expanse of space, but can all these games capture the true spirit of classics like Master of Orion that many hope them to? The latest space strategy to step up to the plate is Horizon from developers; L30 who hope to create games with elements never before seen in others, which in all fairness is a bit difficult these days.

In the year 2020 a foreign 'anomaly' is discovered at the edge of the solar system, thanks to a recording it's discovered that the probe belonged to an alien race called the Kor'tahz. It turns out the Kor'tahz fled their creators as a failed experiment in order to continue on with their lives and to warn other of the dangers of the Varaians. It is thanks to this probe, that the Human race harnesses the technology to create ships capable of interstellar travel, which is where you come in. 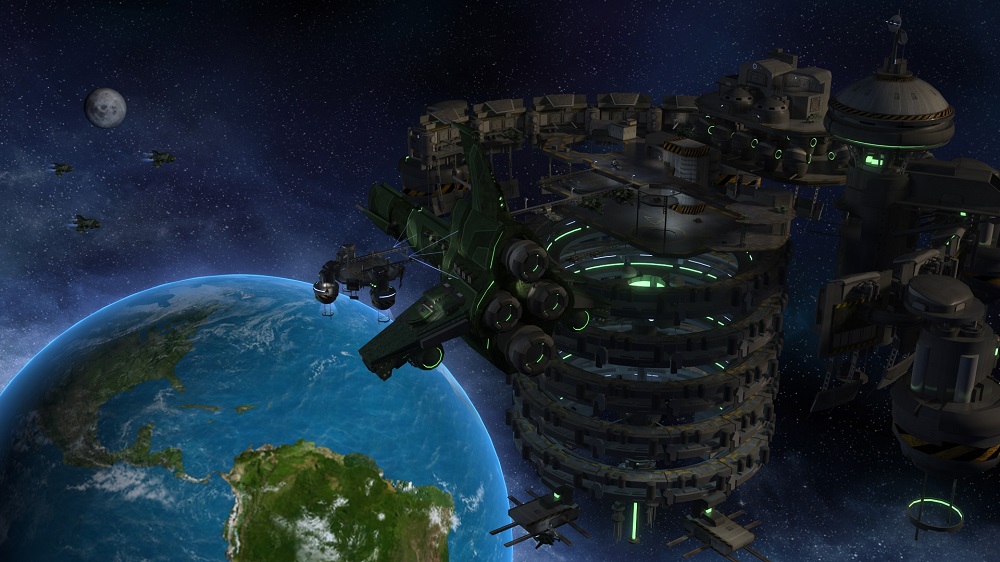 Something that most definitely separates Horizon from most other 4X space strategy games is the core game itself is actually bundled with a story, you aren't simply given a small corner of space expected to have fun and beat the other known races in your galaxy to supreme domination. Instead, if you choose to play as a human you'll be bumbling through systems like the unevolved monkeys that you are, stumbling upon great already evolved races that see potential in your meagre colonies, your diminutive space craft and simple technologies, you're basically a little tiny fish in a particularly large ocean, and with up to ten very different races all with their own behaviours, goals and strategies it gets pretty interesting. Of course you needn't play as the human race, and these ten races and blank templates are up for grabs if you want to dabble in them, but if you want to learn a bit about the galaxy around you and the game itself it's good to start out as the Human race.

The 4X strategy genre is not known for its simplicity, and for that very reason Horizon comes complete with a fairly coherent tutorial to get you up to speed with the way the game plays out, however like a lot of strategy games, the tutorials rarely take place on the screen they are informing you about which leads to quite a bit of confusion as you try and find the button you were informed about via a crude screenshot, this is even more daunting when you are faced with the planet UI screen which serves as somewhat of an explosion for your eyes. However the tutorials do teach you about pretty much everything you would want to know about, and if you get a little lost you can bring up a hint screen to inform you what every icon you are confronted with does, but the tutorial cannot be done in haste, in order to fully soak it in you'll need to spend a while looking at the various icons and labels to truly figure everything out.

It shouldn't take you long to realise that Humans are pretty stupid, so if you do start out as the fledgling race in order to carry out the tutorial you'll shortly find that they're a little inadequate when it comes to technologies, this can be particularly frustrating when you see other races zooming in and out of your solar system, so until you unlock things like interstellar communications or alien translators you'll find it difficult to communicate with the colourful races that you encounter, or even carry out faster than light travel, but before you know it your territory will slower get larger and larger before other races start questioning your expansion, and believe me they will, unfortunately in Horizon there's not much space to fit ten races which can get a little uncomfortable when it turns out your neighbours are haters of squishy pink aliens, so you'd best hope you can cling on to friendly folk like the Gargals of the Kuntari who took favour to my race, unlike those nasty Tantiks! 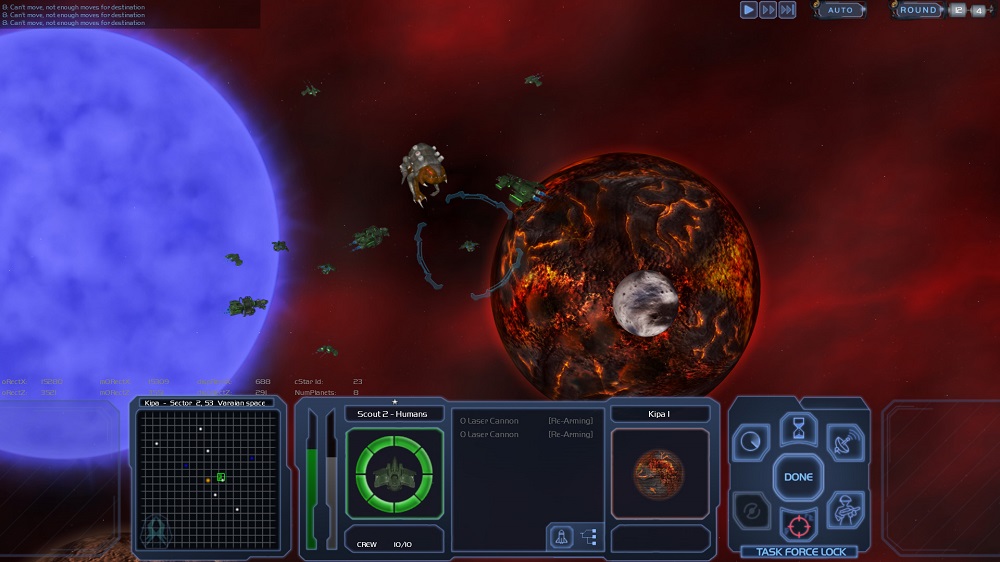 The big question in most 4X strategy games is how has the combat been implemented, well unlike the seemingly standard real time affair of games like Armada 2526 or Stardrive, Horizon opts for turn based combat, it's alright you won't be playing top trumps, instead combat is pretty much how you dreamed it should be; not overly long, but tactical, yet somehow they miss the mark and give you a bit of a no-frills experience with a far too removed view that really takes the excitement away from the idea of tense close-knit battles in space, although like most 4X strategy if you really don't like the combat you've always got the option to auto-resolve your conflicts.

Combat takes place over 20 rounds in which all of your ships may move and rotate as well as shoot all of their available weapons; all of these will have specific arcs of fire and the strength of your shields around your vessel may also vary, depending on how well thought out your ships are designed, this is where rotation becomes incredibly important, and with intricate commands you may find that you can comfortably take on even the most aggressive ships, but if not you may well unlock new components for your ships through research which can be added to your designs at any one of your colonies. The implementation of intricate ship rotation to escape fire on vulnerable sections of your ships is a nice addition that does not often get implemented in turn based strategies as much as it should. All of this sounds pretty brilliant, which then comes down to the bad, much like the recent Realms of Arkania remake, combat is straightforward and has the potential to be enjoyable, and yet you appear to miss at pretty much every shot that you make, but aren't informed why which is quite possibly the most frustrating turn of events possible in a tactical engagement.

As with a fair amount of small development 4X Space Strategies the graphics are quite dated, and the numerous cutscenes that play out in the game when you encounter a new race, or colonise a new planet do look like they belong in a game ten or so years ago, that said, nothing really detracts from the game, and once you've played it for a few hours you get used to the chunky alien models and strange robotic news reporter, or I did. 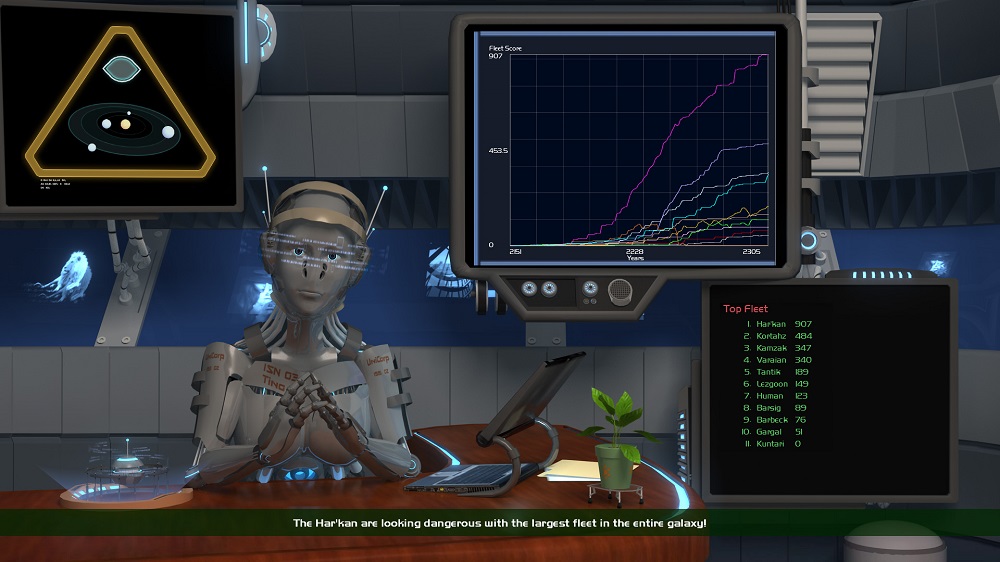 So we've got exploring covered, and exterminating, so what about exploiting and expansion? Colonising a planet is about as straightforward as it gets, just take your colonising ship to survey a system, pick the planet you want and boom, of course certain races cannot colonise certain types before learning to terraform, and others see more potential in different varieties. When a planet has been colonised it immediately turns into an outpost, in this state it doesn't do very much other than stake your claim on it, however once you've upgraded it to a colony you can invest in trade, entertainment, and resources such as food, industry and research, this allows you to specialise planets to bring in your money, which they most certainly will, but there never really seems to be a downside to creating a colony, well except for that, there's no risk, no rebellion, just lots and lots of revenue which gets a bit lacklustre.

Another strange departure of Horizon to the norm is that the game does not feature standard tech trees for you to plan your research for the next billion years, instead tech unlocks much to your surprise, this does often lead to you exploring certain avenues only to unlock the ability to research tech that you find wholly useless, personally I never quite understood the concept of tech trees, after all, no one truly knows what research will discover, it's very brave of the developers to utilise research in such a fashion, one that many won't like, but at the very least you can get some nice surprise technology gifts from the friendly races in the universe if they decide to flourish you with gifts.

Horizon is a 4X Space Strategy that most certainly means well, and has some interesting features, but just won't engage you as much as some of the other games in its field. Oh, and there's no multiplayer in the game, almost forgot that one! But as a fan of the cold solitude of space, multiplayer isn't always essential in a 4X strategy, though some will definitely not see it that way!

Horizon is available now for the SRP of £22.99 via Steam, whilst there are still bugs present in the game, the developers are working pretty hard at ironing most of them out.