The world that we know and love is a broken shell of its former glory, the inevitable happened, the world fell apart and there was pretty much nothing anyone could do about it, however thankfully the ever-shady global corporation Uni-Corp were there to pick up the pieces and bring humanity back from the ashes, for a price of course.

The world of Global -01 is by no means bleak, our protagonist Michael Bezzel; acquisitions expert extraordinaire, or common thief as we might call him lives in a particularly colourful and humorous future where everything comes with terms and conditions, and immortality is a possibility thanks to the brilliance of the second chancer scheme where those that have forgone their corporeal form can have their brain dumped into a robot for a price. 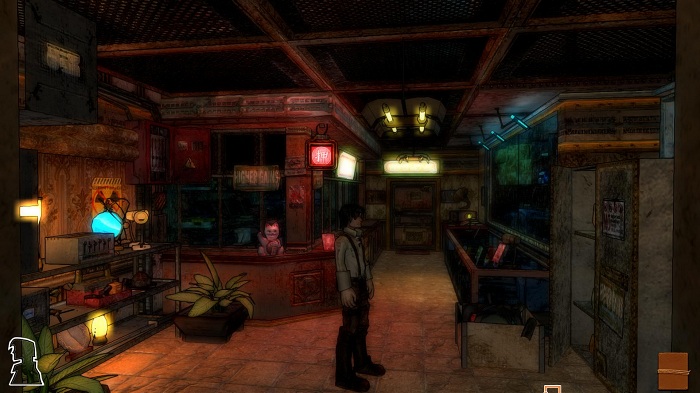 Michael is not the sharpest knife in the drawer, and as a self proclaimed dirt-level schmuck in a deadbeat job he's not had the best of luck with women; with midget sisters to kidney hungry catches he's sure he's met his true love this time, after all, they've been together almost two months! His current situation and the focus of the game is on his wish to propose to his current fiancÃ©e Fran who may be hiding a bit more about herself than she's let on.

Now Michael doesn't want to screw up his relationship with Fran, which is where the premise of our episode comes into play; for advice he seeks his crazy hippy friend Saffron who tasks him with locating flowers, chocolate and perfume to woo his soon to be wife, not so easy in a world turned upside down. However like in any traditional noir, secrets are uncovered, mix-ups are made, and before you know it, Michael has begun on a dangerous journey, which unfortunately marks the end of the very short episode.

The dialogue in the game is no less snappier than a great noir, every line delivered is well timed and stuffed full of wit thanks to the selection of oddball characters that inhabit Kongyan town such as Hawker the stereotypically Chinese vendor, Jin the delightfully optimistic workman or Rubbish, the second chancer restored into the cold metallic husk of a rubbish bin, and as only the first episode in the series, who knows what innately kooky characters Michael will stumble upon. 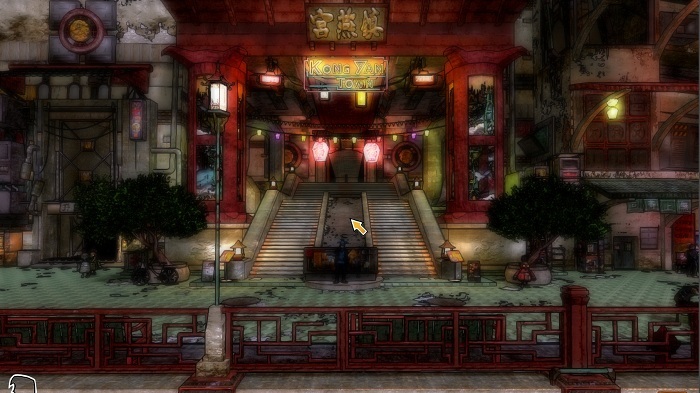 Developer's E-One Studio's Asian flare has definitely emerged through the game, and Hoodwink's beautiful mix of colours make it a feast for the eyes, however it's Borderlands-esque cell shaded twist does cause a few issues; with thick borders encompassing large scenes it becomes quite difficult to distinguish certain features in an area.

Whilst playing through Hoodwink you cant help but feel that too little is informed to the player, whilst there is a help button in the corner, and the optional hint system, you are never really clued-up about your next area, it's only through snippets of conversation that you learn a character you wish to speak to you is in the slums, or on the concourse, but there's no indication of where they are, granted exploration is generally approved of in adventure games, but a player should never really be lost on where to turn.

For those that are a little clueless at times, or like us get a little stuck when a game lacks signalling, there is a hint system built into Hoodwink, these hints appear conveniently when you've been sat around doing nothing for a few minutes, and the game clocks in that you may be a little stuck, this style of hint system is quite nice, because more often than not when you are stood around doing nothing you are stuck! 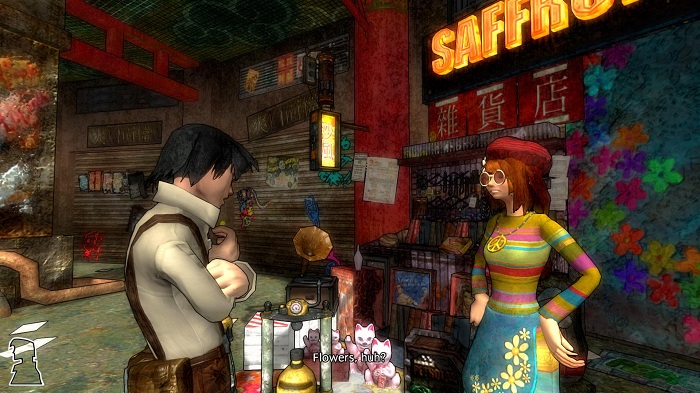 Hoodwink looks absolutely beautiful, and to accompany the art style are some pretty fantastic animations that put the repetitive likes of Mass Effect to shame, and these aren't just on Michael; any interactive character will show their own unique personality, this bespoke animation really excels the game, however there are occasionally a few hiccups to be found.

Graphical issues aside, there is one issue that is the true fear whenever any avid adventure gamer begins a journey of discovery into a new and interesting story; unskippable dialogue, of course we are in the age of talkies, and so the tradition to allow the player to skip dialogue is not as prevalent as it used to be, however after examining the same cigar for four consecutive examinations after hoping that the mouse would skip Michaels inevitable repetition can get somewhat frustrating.

Hoodwink is an adventure game through and through, it requires you to carry out combinations, witty dialogue and puzzles, however the puzzles are not your traditional logic based puzzles, and instead are based around simple interactive movement such as rotating a crank or following cockroaches with your mouse to catch them, which really makes the game feel as though it should be on a touch based device, and whilst it doesn't particularly drag down the game, those looking for some intellectual stimulation may be a little disappointed. 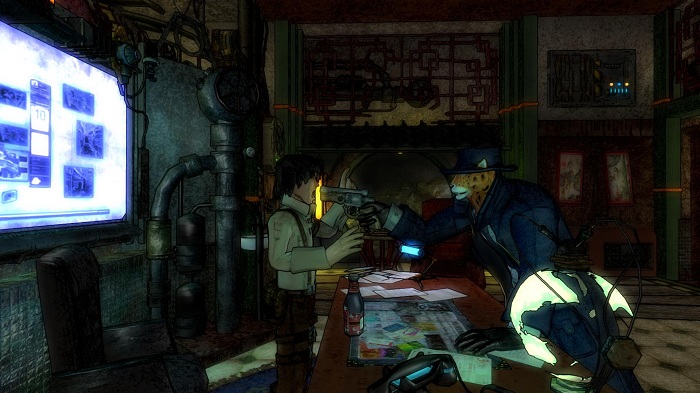 The first episode of Hoodwink has definitely taken us by surprise, and whilst there are a few flaws here and there, we can definitely see a bright future for the fast talking adventure game, we just hope that the other episodes are a little longer.

Hoodwink Episode 1 is available now exclusively on Origin for £9.99, unfortunately there's no word yet on the scheduled release for Episode 2, but we sure hope it's soon.