It may not have a solid release date yet, but Hitman Absolution has already got a special edition lined up. Although it may not be as special as some people were looking forward to, Square Enix have unveiled the Professional Edition today. 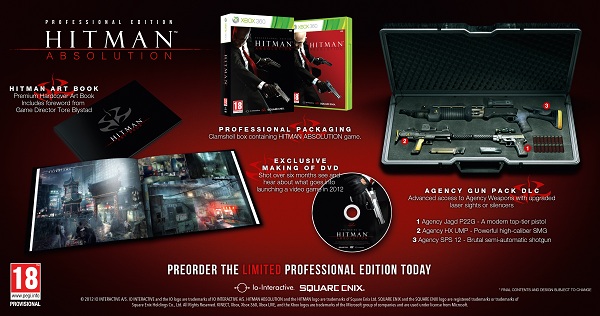 Featuring a premium hardcover A5 Art Book, we’re hoping it delivers a good amount of concept art as well as the renders that similar books are usually full of. However the more interesting addition is the exclusive making of dvd. Making of’s are not common for video games, but when they are they tend to be pretty spectacular, and if we get to spy on IO Interactive’s beautiful Copenhagen offices we’ll be pleased enough.

Alongside physical content, the Professional Ediiton also includes advanced access to a range of the in-game Agency Weapons, so if you aren’t a hardcore player and rely on guns more than stealth, you may be pleased to know that the Jagd P22G pistol, HX UMP SMG and SPS 12 semi-automatic shotgun will be available to you from the start of the game, thanks to this edition.

Hitman: Absolution is the rather controversial chapter in the critically acclaimed Hitman franchise, whilst fans are distraught to see the sandbox stealthing replaced with more scripting and a proper cover system, we still have our fingers crossed for an engaging stealth game full of betrayal and redemption.

The Hitman: Absolution Professional Edition is apparently available for pre-order now for Xbox 360, Playstation 3 and Windows, but we’ve yet to see it on any UK websites, if you do happen to find one, send us a link!