Beyond Reasonable Doom marks the last episode in the Badge of Carnage series; after the last episode’s substantial cliff-hanger, Hector and Lambert find themselves alone in the dark, in a barn, all very Saw-style. However it's not before long that the hapless police team will save the day, catch Barnsley and gain the admiration of Clappers Wreake, well at least one of those is true. Regardless, the season finale is full of twists, turns, dark humour and intuitive puzzles galore.

The winning formula of Hector and Lambert returns from the last episode, and you are required to control both players again in Beyond Reasonable Doom. Fantastically, just like Sam and Max, there is a true need for both characters as you find yourself talking to tree stumps, squeezing through small gaps and getting unbearably close to rabid badger test subjects, and you’ll not survive only using one of the duo, never before has such a dysfunctional team seemed so right.

Beyond Reasonable Doom certainly seems to be by far the strangest of the three episodes that we’ve encountered, and the jokes and awkward humour roll in thick and fast. From digs to British culture, to the classic very slow moving escape vehicle. Straandlooper show a true understanding of entertainment, and are experts at satirising Britain, and Telltale’s collaboration with the Northern Irish Company is perhaps one of the best in adventure game history. 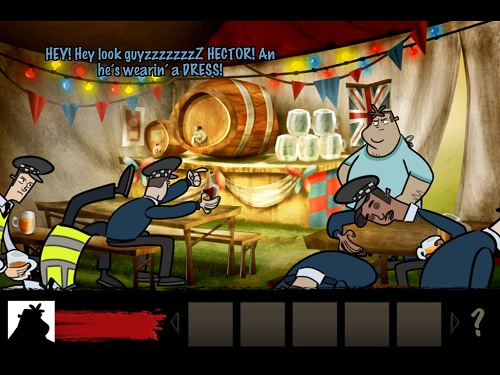 The strangeness ensues with Dairy Farmer Fight Club, no this is not insult sword fighting, in fact it is like no fighting you have ever known, and it is not the brutal strength of Hector; pub-brawl extraordinaire that will succeed, in fact it is the light pansy touch of Lambert you will require, from this point on, the gloves come off, and the full hilarity truly begins.

This time round, the talk of the town is not the terrorist that is picking off the police one-by-one, it’s not the explosion of a building in the centre of the city; it’s Clapfest; the celebratory festival of everything that Clappers Wreake has to offer, which to be fair, is not very much. However it also marks the inauguration of the recently fixed Clock Tower that is set to receive a new ringtone.

The BBC has Strictly Come Dancing, ITV has the X-Factor, Clapper’s Wreake answer to fame is Strictly Come Gurning, it’s this absurdity and more that make the Hector series a brilliant mockery of modern Britain, and if it’s not Strictly Come Gurning, it’s a jib at young mothers or Leicester. Yet after all the absurdities you still feel somewhat of a need to warn the lumbering masses of the immediate peril that they will face when the Clock Tower’s new ringtone is unveiled. 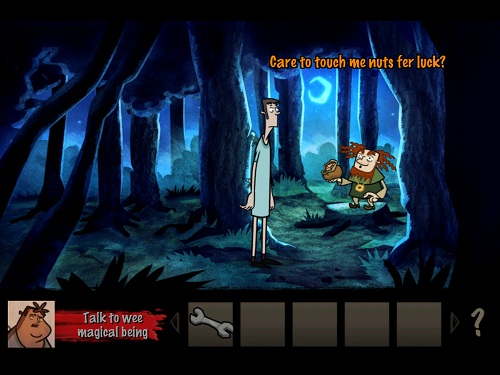 Fans of the series so far will already know that Hector is a true saint, and this episode lowers the bar of anything you achieved in the previous parts, in a bid to save the precious town of Clappers Wreake you will force alcohol on a reformed drunk, fix a competition, drive into a clock tower, explode a bomb, feed the town of Clappers Wreake cakes laced with cocaine and throw a cow off of a barn. But it’s all in a day’s work for Britain’s finest.

Beyond Reasonable Doom seals the series into a book-end of sorts, and you’ll see the return of many characters including the Clocksmith the veteran, Filthy Rich the adult industry entrepreneur, and Tim the Drunk who was possibly one of the first residents of Clappers Wreake that you will have met in We Negotiate with Terrorists, better yet, every character is present with a true purpose, and it is not just placing them in the last episode for a little bit of fun.

Hector may be very different from your standard adventure game narrative-wise, but it does not stray away from the standard story conventions. Being the last episode in the series, you'll receive the customary reveal of Barnsley’s plans —however the more astute of you will have already figured them out- and his history in Biochemistry creates an extraordinary discovery that will cleanse Clappers Wreake of the stigma of Britain’s worst town. 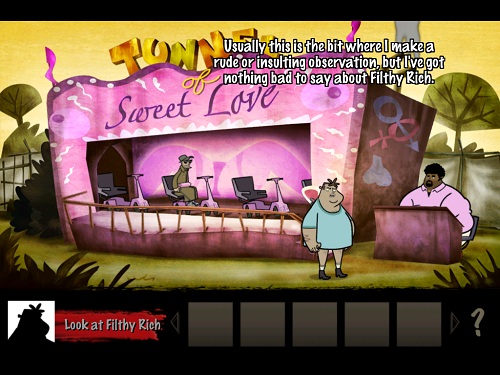 Barnsley’s plan is much like a well-oiled machine, and as you make your way through the episode you will find many points from the previous two chapters all falling into place, and before you know it, you’ll realise that all of that hard-earned success and puzzling has had you working hard to bring Barnsley’s plan together the whole time!

The Hector series has kept itself short and sweet, with only three episodes in the series it has saved itself from dragging the story, puzzles and lives of the characters into a stale despondent pit. With a playtime of around 6-9 hours Hector: The Badge of Carnage series is a brilliant addition to your library of adventure games.

Hector: Beyond Reasonable Doom is available for download now, and if you have been holding out on buying the series, you can purchase the full season pass for a mere $19.99.