A warm welcome back to Detective Inspector Hector, our British anti-heroic, crime fighting slob returns to face sudden death in the second episode in the Badge of Carnage series; Senseless Acts of Justice, will we find out the identity of the Clappers Wreak terrorist and bring him to justice? Will Hector get out of the building alive? 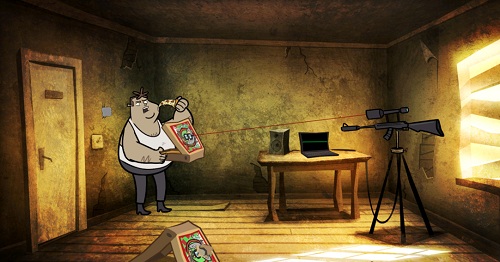 The strange allure to the game is that Clappers Wreake is a true train wreck, and you cannot help but watch, it's the social depravity that is the real face of the UK. To put it best, it’s like watching an episode of Casualty, or Jeremy Kyle, you know that it’s distasteful, it’s actually a bit disgusting and depraved, but for some reason you just cannot stop, it’s addictive.

We did love the first episode of Hector because it honestly made us chuckle, and this time round some of the jokes are even better! Including a poke at the British Prime Ministers, Lidl, Automated Speech Recognition, some of Telltale’s other games, and even some off-the-counter toilet humour. It really is one of the funniest adventure games around at the moment that isn't afraid to not be innocent and charming.

You'll visit a host of new locations around Clappers Wreake which form most of the episode, including a trip to Doreen’s Nails & Guns, Church-cum-brothel; The Furry Furnace and Clappers Wreake’s finest dining restaurant at Chez LaBoeuffet to name but a few. As you would expect, each houses the best examples of the scummiest corners of the UK, and have the strangest characters inhabit them. 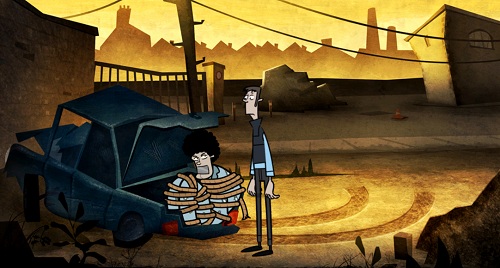 Senseless Acts of Justice truly represents contemporary British society, and is the only game that really achieves this, sure Fable and Blue Toad Murder Files shows us the side of Britain that the rest of the world want to see; the Fabled, tea drinking, dandy Brits that play polo and wear monocles. However Hector sums up the real Britain into a short 4 hour game, it's the Shane Meadows of the British game world, it all makes it feel a lot more like a serialised television show, and less of a pompous cinematic experience.

Another interesting note, is that an episode of Hector is a lot like an episode of The Simpsons; you’re told to track down the purchaser of a rifle, which involves you visiting a Nail bar to find out you need to go out on a date with the owner, who wants to visit Chez LaBoeuffet, but the restaurant is fully booked so you have to get footballer Short Porchester blackmailed at the Brothel that used to be a Church, and then drug a restaurant full of people in order to get the key to the filing cabinet. Every puzzle is a hilarious chain of events that makes perfect sense when you are playing the game, but seems completely random when you detach yourself from the world of Hector.

Video games are full of tutorials these days, and they’ve even added one into Hector, you may think that the controls and concept of a point and click is self explanatory to a small child, however it mustn’t be the case. Either way, at the very least the tutorial is not intrusive, and they are present to explain the new concept of the multi-character select system which sees you control Lambert, Hector’s simple but affectionate partner in anti-crime. Working similarly to Edna & Harvey's multi-character control system, controlling both Lambert and Hector proved quite a nice puzzle, possibly one of the best in the game. 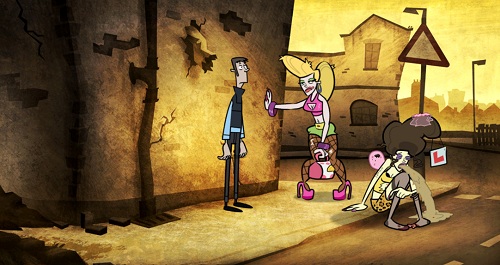 We loved the hint system in the first game, it was insulting, helpful and reminiscent of the good old UHS Hints system, however in Episode 2 they have further evolved the hint system for those that don’t really want to use it, but found them self stuck in a bit of a corner. Well now the hint system takes Hector straight to Lambert as a last resort before you succumb to the dirty dirty need to use hints. Better yet, it really works, after getting stuck on a couple of puzzles a quick visit to Lambert gives you enough of a randomly subtle hint that is perfect for setting you in the right direction, as well as make you feel like a right idiot!

In the second outing the series appears to have kept its intuitive gameplay, and most puzzles are self explanatory, this does however make for a pretty easy episode, and the run time is only around 3-4 hours, depending on if you happen to get stumped by a puzzle, however for just over a fiver, you are getting a true slice of Britain.

Telltale and Straandlooper have outdone themselves yet again; with some fantastically strange characters, the brilliantly quirky art style, truly British dialogue and interesting and varied puzzles make the episode a great addition to the well established and proud adventure genre. 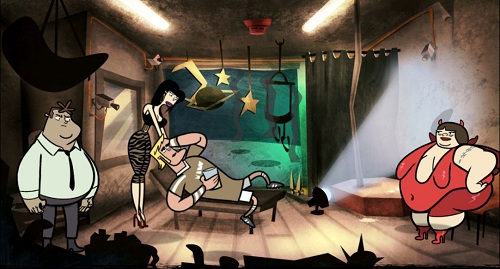 In true episodic fashion, Senseless Acts of Justice ends with a bang; with an even bigger cliff hanger than episode one you’ll be scratching at your wallet to give Straandlooper more money to finish their next episode sooner. But truth be told, you wouldn’t want it any other way!

Although it will only keep the strongest of adventure gamers occupied for a few hours, Hector: Senseless Acts of Justice is still a breath of fresh air in a turgid genre full of black and white games. It’s entertaining, makes you think, makes you laugh, and simply because it’s the only game that you’ll meet a tap-dancing Street Urchin, with a hook for a hand, that lives in a fridge.

Hector Badge of Carnage — Senseless Acts of Justice is available now for PC and Mac for the low price of $19.99 which gets you the full three episode series. If you already purchased episode 1, then you can pay $9.99 for the next two episodes. Hector will return in the third and final episode of the Badge of Carnage Series in Beyond Reasonable Doom which is scheduled for a release in September 2011.