The police are getting picked off one-by-one by the elusive terrorist roosting in a dilapidated building in the quintessentially modern British town of Clappers Wreake. With no one else to turn to, the police force look to super-cop Detective Inspector Hector. Just don’t go expecting the quaint Midsummer Murders; in fact prepare for Life on Mars’ Gene Hunt situated in the worst corner of the UK that you could imagine. 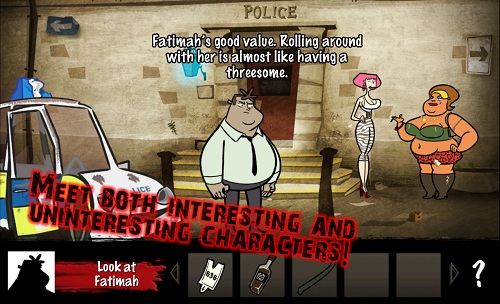 Originally an iPhone game, Telltale and Straandlooper are bringing the Hector: The Badge of Carnage series to adventure game fans across Windows and Mac in a much higher resolution with higher quality sound in its debut episode Hector: We Negotiate with Terrorists.

You'll find many pearls of wisdom hidden in the depths of Hector, alongside the train of thought that parts an ASBO-hunter with his trousers, or the use of a heroin junkie as a faulty bit of merchandise, there's one thing in Hector that is so completely down to Earth that you can't help but bite the bullet and agree with the vulgar stain on the British Police force, because 'There ain't nothing can't be fixed with a cherry bakewell'.

Alongside heroin junkies and ASBOs you'll be tasked with convincing some 'diaper-wearing' ravers that breathmints are the new drug, and shutting down an adult store on the grounds that its foundations are too weak is just some of the obscure ways around the demands that Hector must fix Clappers Wreak in order to appease it's terrorist.

Hector: Badge of Carnage is a truly British game, don't go expecting the quaint humour of Fable, or Monty Python, Hector provides good, offensive and lewd humour, some Americans may not appreciate it brashness, and will not find the series quaint in any manner. In fact, when you think about it, Hector isn’t all that rude, as swearing goes you’re more likely to hear his own brand of insults rather than your standard f’s and c’s, so if you find Turd Maggot, or Worm Fart, or Butt Pube offensive... what’s wrong with you. 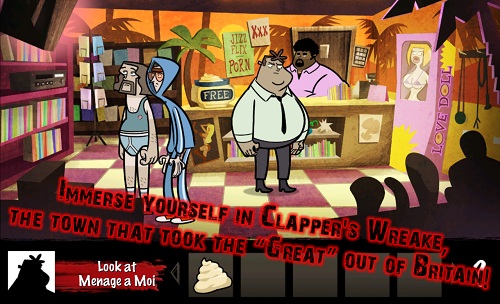 The graphics and animation in Hector are very simple, not as exquisite as The Whispered World, but more sophisticated than say Edna and Harvey, they are exemplary of your average adventure game, and they do the job, and make the game fun and interesting to look at, which makes the overall experience that much more enjoyable. More importantly the graphics are not the only thing that Hector has going for it, you've got great puzzles, brilliant oddball characters and strange situations.

What is best about Hector is that it gives you clues that aren't outright hints, sure there is the hint system, which is both comical and helpful, but you've no characters spouting exposition to help you towards your next goal. Instead clues are given to you in the form of far more subtle puns, most of which you will only understand when you've given all the locations a good inspection.

There is of course Lambert, your partner who you can ask for clues to puzzles, however his clues are as cryptic as a Dali film, ask him about procuring £25,000 and he will tell you to have a sit on a toilet to think it through, again the hints are not in your face, they are subtle, and make you feel that much cleverer when you figure them out. 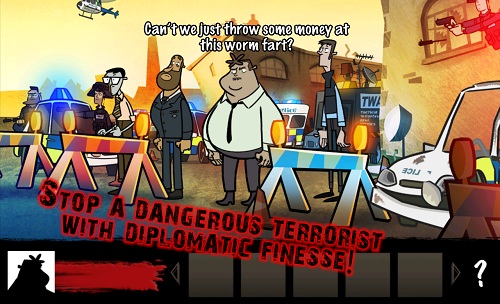 The only real trouble regarding the puzzles is that some objects were hard to find, it wasn't always entirely clear what was scenery and what was an important piece to a solve a problem, I spent half of the game unbeknownst that there were toilets in the park. Perhaps since Daedalic spoilt me with hotspot keys my adventuring has gone down the plughole, but when you approach the Hector series, keep in mind that it is one that you will need to keep a vigilant eye about you.

What is most refreshing about Hector: We Negotiate with Terrorists is that it is a true adult game, not gimmicky like Leisure Suit Larry, but not too serious like Phantasmagoria or the more solemn of titles, expect laughs a-plenty without the need to roll your eyes!

If you aren’t too modest, and like a good laugh at inappropriately British humour then seek out Hector: We Negotiate with Terrorists, you definitely won't regret it, and you'll be left desperately wanting more of the Gene Hunt wannabe.

Hector: We Negotiate with Terrorists is available now for Windows and Mac, for $9.99, and its worth every penny! Episode 2 and 3 should follow shortly this Fall, we can't wait to see what they have up their sleeve.