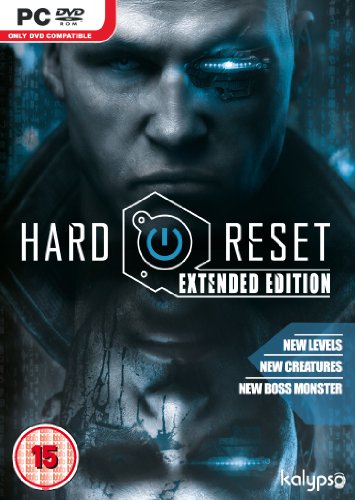 The world as we know it ceased to exist long ago. Humanity is at the verge of extinction, and the few remaining live in the last city of Bezoar. Yet it is not mankind waging war on itself, in the harsh world of Hard Reset, humans are at war with the machines who want control of 'The Sanctuary' to assimilate the network of billions of digitised human minds for their own use.

At the helm of mankind's last stand are the CLN; a combat unit of the corporation that are just managing to keep the machines at bay, as Major Fletcher of the CLN you are called to investigate a wall breach in the closed off city of Bezoar, however this routine assignment soon escalates into a last fight to preserve the human race. However, through the gritty graphic novel style cutscenes and points of information, you soon find that not everything is as it seems, and there may well be human life outside of the corporation's city. 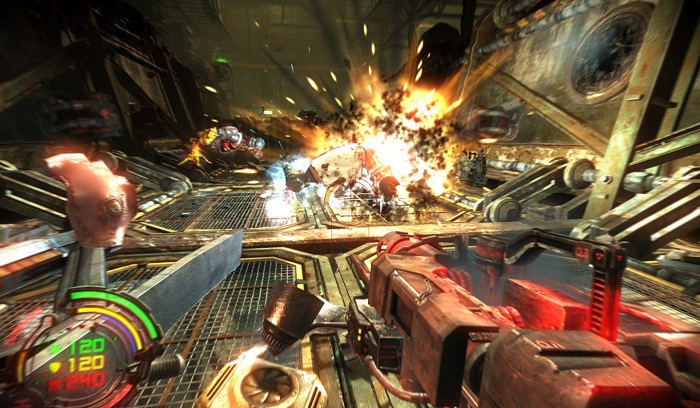 It is without a doubt that Hard Reset transports us to a bygone era in FPS gaming; with secret areas, collectables and even a scoring system for every level, Flying Wild Hog take us back to the days where shooters were fun, and simple, there's no moral high ground in sight, just pure unadulterated fun rather than attempt to transcend beyond the current market dominators like Call of Duty.

This may stem from the fact that Hard Reset is not shunned by moral choice, hard storyline and the loss of player immersion as most shooters these days. Hard Reset presents you with brutal enemies in an environment where almost nothing is safe, explosive barrels and electrical machinery litters the alleyways and streets you'll run through; each encounter will be met with sensational explosions, fireworks and gore, it is the true successor to the Dooms and Quakes of the 90s.

Hard Reset takes you into a cyberpunk future full of cybernetic enhancements and augmentations at the belly of a seedy dystopian underworld; the environments evoke the neon, highly marketing driven futures of Judge Dredd, Blade Runner and Total Recall, on every corner are the evocative stings for sex lines and cheap body augmentations, combine these with the ever-present danger of the machines and you find the familiar signs and posters of a weary police state; of curfews, watching your back and protecting yourself from the unseen threat, all creating a brilliant environment to devastate with a hail of bullets. 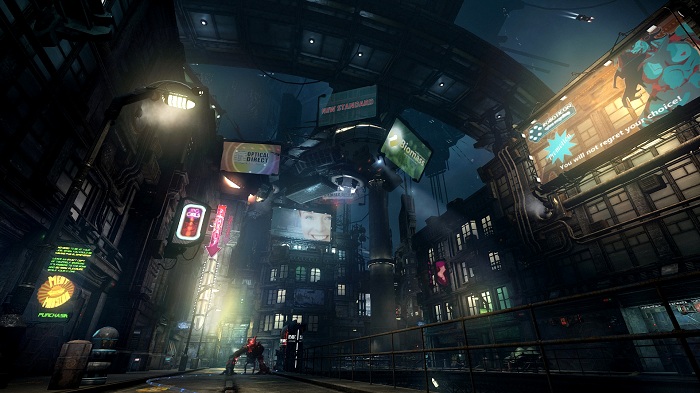 No shooter is complete without the standard arsenal, and Hard Reset is no different, however rather than carry around 10+ weapons, you simply have two that through a series of modules or 'upgrades' can perform the variety of munitions that you would expect from your typical shooter; the combat shotgun, RPG, even a railgun, what makes life even easier in Hard Reset is that the two weapons only require an ammo type each, so you won't need to hunt around for those precious RPG rockets, instead you just use more of your CLN standard ammo than when using a rifle.

In order to 'upgrade' your weapons, and indeed yourself you will need to locate nano currency dotted around the world in the smallest nooks and crannies for your discovery, after collecting a certain amount of nano currency you unlock the ability to purchase upgrades at the select HX-10 vendors throughout the city. Some modules you would be lost without such as increased health, shield regeneration, grenade launchers and more, unfortunately about 3/4 in you will find that you've found your guns of choice and will deem some of the upgrades unnecessary for the rest of the game, leaving you sat on 5 or 6 upgrades that you just don't need.

Even in the future where the survivors of the human race battle on with their mechanic oppressors, bullets are a commodity, and effective at taking down the enemy, however the true machine-hater will get a lot of use from the NRG weapon pulsing with electrostatic shock it's perfect at taking down the small drones that will rush you en masse throughout your journey through Bezoar and beyond, but for some, nothing will ever beat the resounding shots of a short-range shotgun. 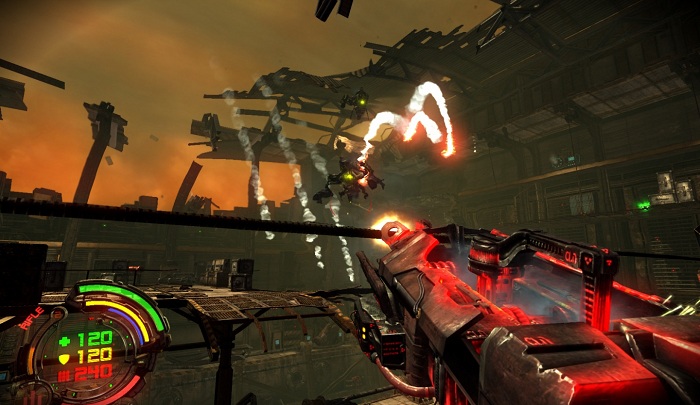 With mankind on the brink of extinction your enemy is a far cry from deluded militants, on the top of your agenda is to destroy the mechanical threat plaguing your last city, so you'll encounter a variety of chunky robotic enemies ranging from small annoying pests, to hulking bull-like monstrosities, there's also some very quake-esque cyborg hybrids armed to the teeth with machine guns or rocket launchers. However all the cyborgs, giant insect bugs and flying police cars pale in comparison to the colossal bosses that you will stumble upon, in true fps fashion these gigantic opponents have specific sweet spots to allow you to bring them down with earth shattering damage and massive explosions.

One of the many criticisms that plagued Hard Reset's initial release was the games' runtime, most games on the market will see a quick playthrough completed in around 6 hours, and Hard Reset is no different.. on easy mode. This game is by no means a walk in the park, and if you want to play on anything above easy mode, expect a good challenge that will take a healthy amount of time, this is without even touching the added heroic mode, that will allow you to play through the game with no checkpoints just like good old shooters!

Also included with the game is the perfect accompaniment to such a manic and explosive shooter; Survival Mode, practically a horde mode, this frenzied wave based challenge will give you the very bare weapons for wave upon wave of relentless machines across 4 arena styled locations found in the game, complete with HX-10 vendors for upgrades, allowing you to evolve your arsenal as you smash in the mechanical menaces. 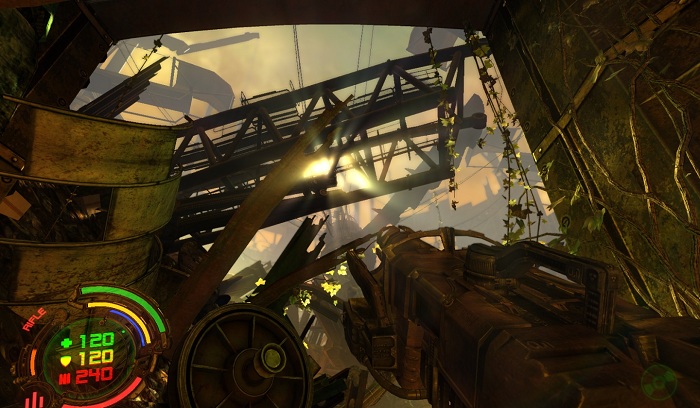 Hard Reset is a raw FPS that says no to the current trends in the market, it is as pure a shooter as the likes of Doom or Quake, and its combination of brutal destruction, massive bosses and fast paced action make for an overly satisfying experience, and to top it all off it takes place in a beautifully modelled world.

With Kalypso's Extended Edition release you receive an extra 5 levels, some new enemies, upgrades and bosses, if you are interested in delving into this cyberpunk mastery of simplicity there is no question as to which version you should get, and with the Extended content exclusive to retail, best go hunting for a copy whilst you can!