Thanks to the great people at Ubisoft, Myself and Tim headed down to the Reading Gamerbase for a taste of Splinter Cell: Conviction before it hits stores next week.

As soon as we had the chance, we hit the singleplayer campaign; we really enjoyed the opening tutorial to the game, it was slightly less subtle than some games, and got you into the action very fast; making you feel as though you were actually already playing Splinter Cell: Conviction, and not just a tutorial.

Having more time to get used to the game than you did in the demo we did pick up on a few points fairly quickly that we had not noticed before; the regenerating health system works fairly well, in a way you are punished for playing the game gung-ho, and it is easy to die if you get caught in a firefight with a few enemies. 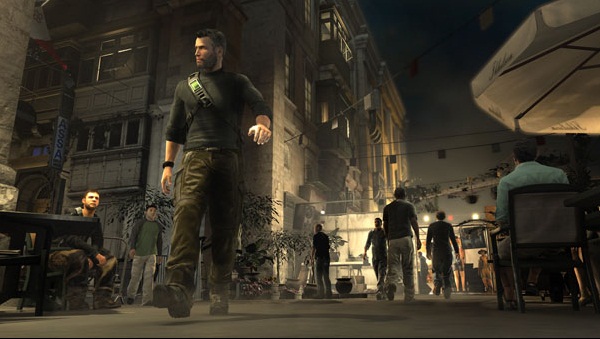 The Weapon Stashes littered throughout the game are also a very nice addition; these work together with ‘Challenges’ basically in-game achievements that reward you with challenge points for doing things like vanishing without a trace after a kill; these points that you receive can be spent on upgrading any of the guns or gadgets in your arsenal; the stashes work in a similar vein to Hitman 47’s hideout; any weapons you pick up in game will be stored for any future use when you take them to a weapon stash, this feature works quite nicely when there are certain levels that just cannot be completed without a heavy firing weapon.