Bungie have been working on Halo for over a decade now, they quite literally turned console first person shooters into something that I could take seriously, sorry Golden Eye fans, consoles had nothing on the PC until Halo: Combat Evolved arrived on the scene. Halo 2 with Xbox Live brought multiplayer gaming to the masses, it wasn't quite Quake but for many people it was their first experience of shooting other people online. Halo 3 summed up Bungie's story-telling ability, and ended the Halo trilogy in brilliant fashion. What have they managed to do with Halo: Reach?

The game revolves around a group of Spartans who go under the handle Noble Team, you play as the nameless, faceless, gender-selectable Noble 6. The game provides little clues as to your background, only that you've recently been transferred, presumably to fill a spot left by a Spartan MIA. As feared Noble Team are filled with your predictable stereotypical group of soldiers. Although admittedly they're not as annoying as I was expecting. 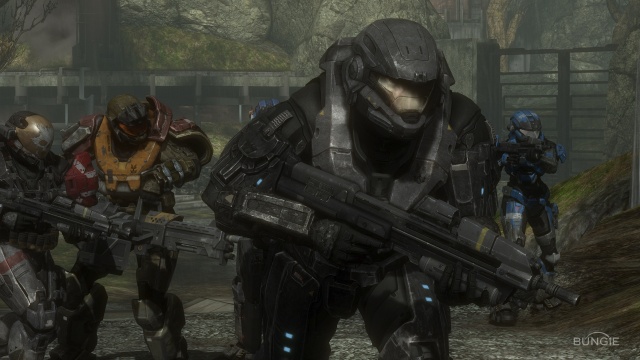 Gone are the days of Sergeant Johnson's awesome speeches about Halo being a giant Hula Hoop, or reminding marines that they didn't have fancy-schmancy tanks back in his day, they had sticks and had to share a stone. The company and advice that Cortana provided in much of the Halo games is replaced by another member of Noble Team, typically fighting the Covenant by your side.

Perhaps this small change highlights changes across the entire game, it takes itself much more seriously than previous Halo games. It is in this regard the most Call of Duty of any of the Halo games to date.

The campaign takes place in the year 2552, directly before the discovery of the ring world Halo, and the events of Combat Evolved. Reach serves as the UNSC's primary military hub. The game successfully conveys the fact you're on a planet, it feels larger in scope than any of the previous games, and as you'd expect you run into a large number of civilians and wildlife during the single-player campaign. Having civilians and ostrich-like birds and other strange creatures in the campaign was a refreshing change, previously Halo games have been empty from that standpoint aside from marines, the Flood or the Covenant, possibly insane Forerunner artefacts and the noise of crickets.

It does help the game make you feel like you're on a living breathing planet. Something Halo 2 and Halo 3 couldn't achieve in their sequences on Earth, where the only signs of life were advertising billboards and wrecked civilian vehicles.

During most of the campaign you have one or more members of Noble Team with you. These aren't the marines following you around like you're used to. These Spartans don't get killed easily and if used properly can certainly help defeat the Covenant. Although like previous Halo games they are still dogged by questionable AI - something that can't be said about the enemy AI. 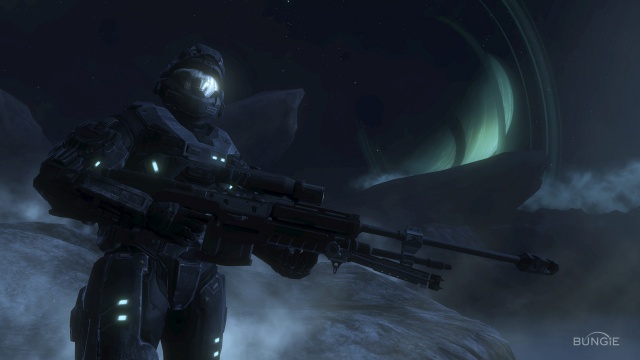 I found it harder to get emotionally attached to the characters like the previous Halo games. Maybe they're just not interesting enough or maybe you just don't spend enough time with them. Half the team could fall down a bottomless pit, be stuck down there and I don't think I'd lift an eyelid. Yet the scene at the end of Halo 2 when Cortana was left behind with the Gravemind is well known for producing a strong emotional response. Not that the game doesn't have such epic storytelling, or its moments that make you stop and think, but Noble Team sure doesn't make up for having Sergeant Johnson and Cortana hanging around. May be if we had spent more time together more of an emotional bond could've been built.

As you might expect with Halo taking itself a bit more seriously, and trying to be, dare I say it, more realistic. The Covenant is a little bit different to how you might remember. If you ask any Halo player what some of the funniest things in the game are, after Sergeant Johnson's epic speeches most of the time they'll probably say the Grunts. These colourful, happy, cute little alien killing machines aren't quite as you remember them. No longer do you hear them screaming in a squeaky voice "runaway", "I'm not chasing it, it looked ferocious" or "you're a bad demon!". The alien voices are much more muted, much more I suppose - realistic.

In my opinion the Elites are one of the key elements that made Halo such a brilliant game, not only was it awesome seeing them directing Grunts and Jackals, but their AI was fantastic they'd take cover, flank and advance in unison with other Covenant to flush you out. For 2001 that was nothing short of amazing when most games out there had dumb AI which would usually just patrol, and upon seeing you stand there and shoot, advance a little, stand there and shoot and repeat. I was disappointed when the Elites rebelled against the Covenant and the Brutes took over their position, the Brutes just weren't as interesting even after they were dressed up to look more like Elites in Halo 3. It is great to be fighting Elites once more, let's face it they just look awesome. Yes Hunters and Jackals are still in the game and updated to match, but let's face it fighting Elites is where it's at. 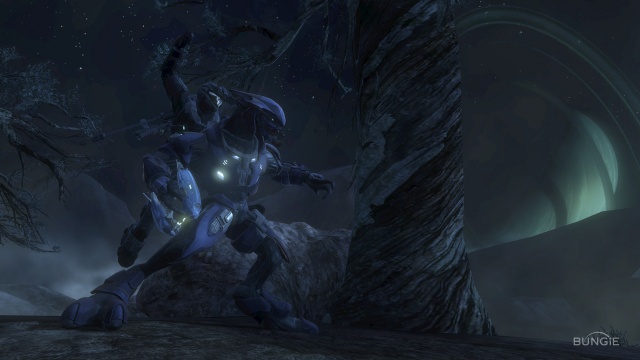 The AI still puts up a good fight, especially on harder difficulties where engaging a group of enemies is a prolonged drawn out battle, not a quick run in, grenade toss and melee in the face like it is on easier difficulties. The combat in the game is still very much Halo with the same thrill every time you finish clearing out an enemy position. 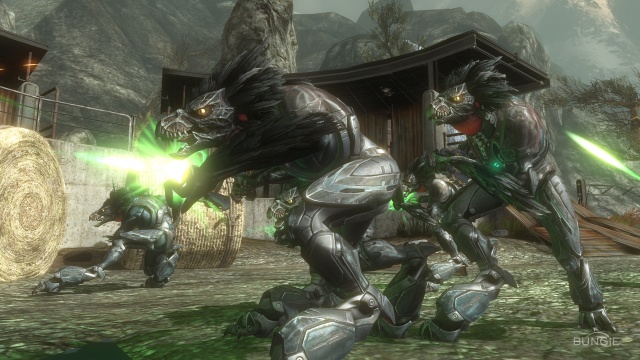 The campaign itself feels like it has had the best bits of the Halo series all rolled into one. There are epic vehicle sequences, sneaking around at night with the sniper rifle and the close quarters battle inside Covenant ships. Mix the brilliant combat with the brilliant story telling we've come to expect from Halo and you've got a winner on your hands. Even Noble Team's stereotypical characters can't detract from the overall story.

The much touted jet-pack and armour capabilities adds a welcome change that works a bit better than Halo 3. Like the special pick ups in Halo 3, such as the bubble shield you can now pickup armour abilities. This sort of reminds me of Crysis, except you can only have one suit mode at a time and you can't change it on the fly. The campaign starts with the sprint ability, later on you can pickup the invincibility shield, the hologram which projects a short-lived decoy of you that runs across to a point you aim at when activating it, the jet-pack and so on. These abilities typically last for only a few seconds before they wear out and must be recharged, which happens automatically. I found the hologram particularly fun and useful when attempting to flank enemy positions, or even getting a good shot or two in at a Jackal as he turns to shoot at it.

The health bar has also returned and it did take me a little while to remember that I had to look for health. Later Halo games had used the shield in conjunction with an unknown but small amount of health that would regenerate when out of combat. The system in Halo: Reach essentially works the same as in Halo: Combat Evolved. It does mean you have to pay attention to that health bar.

The multiplayer remains one of the game's key strengths, like other Halo games co-operative play through the single-player is back, and is definitely one of the recommended ways to play through the game. For those hardcore players out there who insist on completing it on Legendary the co-op difficulty does scale with multiple players making it more challenging than Halo 3 for example. Firefight mode is back from Halo 3: ODST and has even more options now, importantly you can now play via matchmaking for when your friends aren't online. All the regular multiplayer modes are back with more options than before. Skulls are still present in multiplayer and allow you to customise the experience. Another new addition to the game is the credits system, with a large percentage of credits coming from the multiplayer it allows you to customise Noble 6 by buying armour upgrades.

Graphically Halo: Reach is one of the best looking games on a console. I can't say it's the best in its class like arguably the original Halo could. But the characters and enemies are much more detailed than in previous games, the environments are still open and although less colourful than previous Halo games. It still maintains some of the vibrant lighting and colourful landscapes that made the earlier Halo games so distinguishable. It might not look as realistic as Call of Duty, but at least the game uses more than just grey and green in its colour palette. 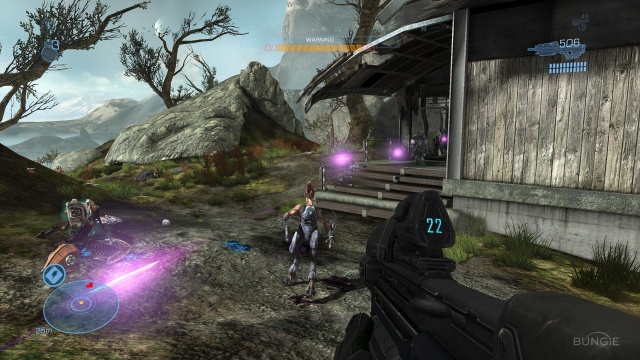 On the audio front Halo: Reach maintains the high standards set out in the previous games. The soundtrack is still awesome and will no doubt go on to be one of my most listened to soundtracks. The weapon sounds are rich and the energy weapons sound better than ever. The voice acting in the game is solid, bar the odd irritating squabble between members of Noble Team. The Covenant as I eluded to earlier take a much more back seat position in the audio, they don't speak English anymore - at least not from what I've been able to make out. The Grunts losing their funny one-liners is may be a little sad but reflects the overall directly Bungie has made so isn't that surprising when taken in context with the rest of the game.

I suppose the question many people will ask would be "is it better than Halo 3: ODST?", the answer is yes. In fact it might be the best game in the series. If you like your shooters a bit more serious than you'd probably enjoy Halo: Reach more than any other Halo game.

The second question probably would be "is it better than Halo x?" May be, I'm not sure if it can top the story-telling in Halo 2, getting an inside look at the Covenant ranks very highly as one of my most treasured gaming experiences - despite many people disagreeing. Nor can it be as ground-breaking as the original Halo and maybe it'll be hard to beat the epic climax of Halo 3, nor can it give you an insight into a relatively frail group of ODSTs battling for survival over the course of an afternoon. But it can give you insight into how a group of Spartans would fair during a full-scale planetary invasion by the Covenant, and yes, that is enough by itself.

For Halo fans this is a no-brainer, this game is a must have. For first person shooter fans, even the new Modern Warfare crowd this should be something that is not only played, but experienced. It deserves nothing less.