Lace Mamba Global have announced that they are publishing the retail version of the recently digitally released PC Satirical RPG Grotesque Tactics 2: Dungeons & Donuts in the UK scheduled for Q1 2012.

Grotesque Tactics 2: Dungeons and Donuts is developed by the German studio Silent Dreams, and is the sequel to the critically acclaimed RPG Parody; Grotesque Tactics. Contrary to what the name suggests this is not a tile, turn-based RPG, and is closer to Dragon Age or Final Fantasy XII. 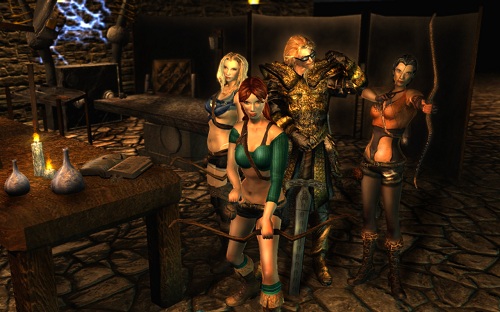 In Dungeons & Donuts, the citizens of the Kingdom of Glory are celebrating victory in the catacombs of their former enemies when a sudden fog engulfs almost all of them. The remaining survivors barricade themselves in the depths, the Knights of Glory; a bunch of shady mercenaries and the arrogant high elves band into guilds to resolve the struggle for food, survival and escape. The only problem is that nobody seems to notice the awakening of dark forces in the dungeons below because the guilds are too busy fussing with each other, to be fair, you cannot blame them, after all everyone knows that high elves are far too arrogant!

Grotesque Tactics 2 will introduce new content to the saga in the form of a completely reworked and new direction of graphical style, as well as a new character creation and levelling system, with talent trees, quest logs, and more importantly a new storyline involving the cast of the original Grotesque Tactics.