Surprisingly enough its only been just over a year and a half that the original Deponia raced onto our PC monitors, and two more chapters on the trilogy is coming to a close with one very special promise from the developers at the renowned adventure game studio Daedalic Entertainment; this series is going out with a bang!

Goodbye Deponia is the finale that you wished all your favourite series' would end on, with no success in stopping the destruction of Deponia, tensions are high, and if Rufus and our heroes do not inform the Elysians that the planet is inhabited in time the oppressive Organon will blow up the planet! The question is, will the series end with a literal bang or will the rag-tag bunch of misfits manage to save their home in time? 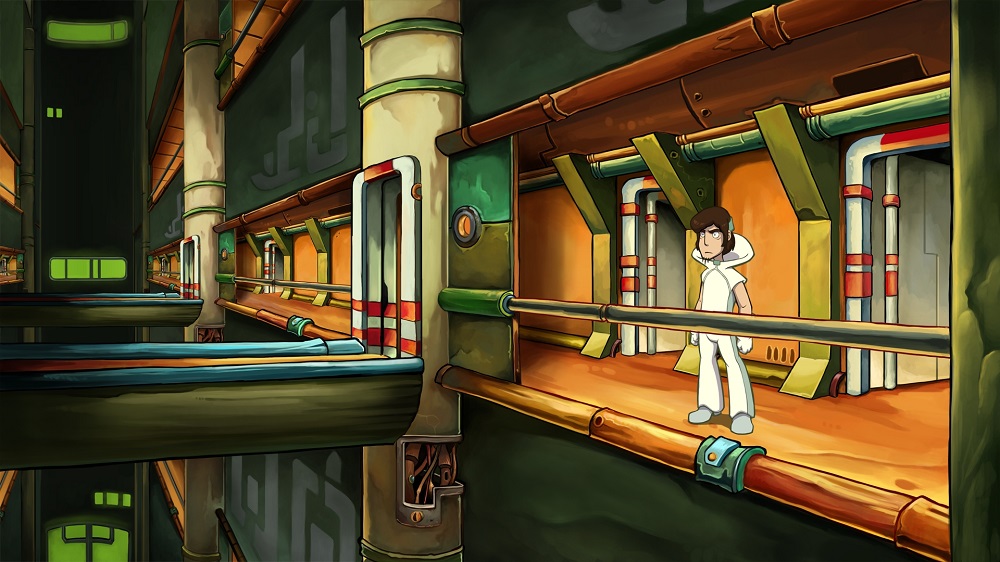 The only trouble is that Rufus your character is not a hero, he's a bit of an asshole, everything he tries to do, he screws up,and quite frankly everyone just wants him gone but are too polite to say anything, he doesn't really solve problems, but creates them with his hair-brained schemes. In fact it gets to a point in Goodbye Deponia that it starts to get a little worrying that with the imminent destruction of his home world Deponia, can he change his ways and not focus on his dreams of getting to Elysium for a few minutes?

If you're familiar with the Deponia series then you'll know to expect that any number of bizarre scenarios and events will take place with or without Rufus' interjection, the world is rich and full of some of the strangest characters you'll meet in a game, and some of my personal favourites of Goodbye Deponia would have to include the strange sitcom that is the Bozo family, complete with canned laughter, a disillusioned laundry sect, camping out four children in the mouth of a slime monster, and best of all a time traveller stuck in the toilet who'll gladly take your stack of money for paper and ensures you'll get your change after he's done, these are the types of things you would never expect of your standard adventure game, and is possibly one of the most exquisite aspects of the Deponia series, much like Edna & Harvey a lot of what you'll encounter is just inspired madness.

What's even better though, is not only will you encounter such strange and unique situations in this last chapter of the Deponia story, but there are some absolutely cracking puzzles for gamers to get their teeth around, these consist of your standard conversation puzzles like proving you're a bit unstable with a Rorschach test, taking part in a bit of hands on surgery, or distracting security cameras in a delightful turn based arena. If you're the type of adventure gamer that appreciates their puzzles taking form inside of the story arch and not just some random logical device locking a door, you'll love Goodbye Deponia, and even if you aren't a fan of puzzles, you can skip any that you get completely stuck at! 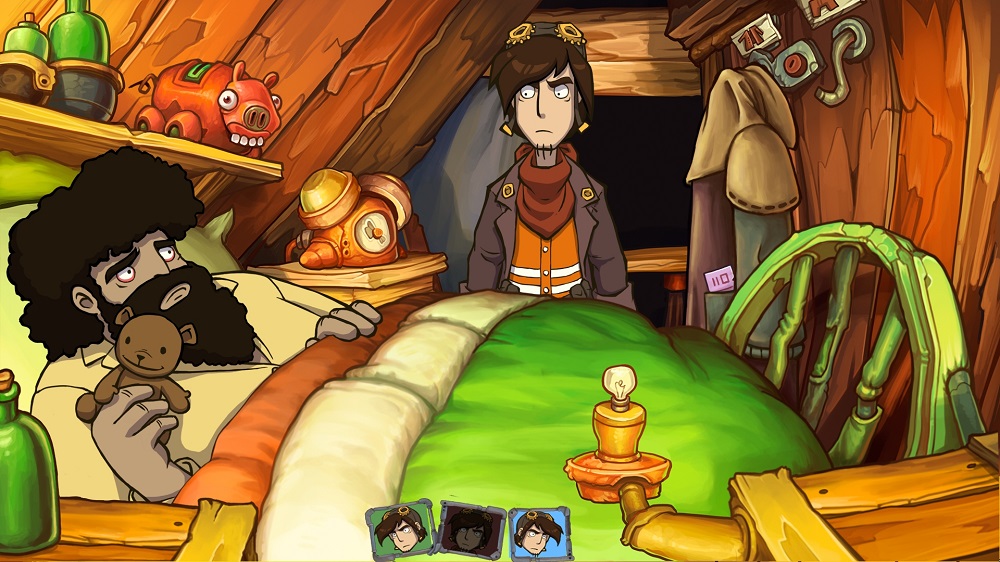 Aside from some of the puzzles in the game, a prevalent mechanic used in Goodbye Deponia focuses on clones, as it turns out, clones are a big thing in the Deponia series, you just didn't know it, and so after Rufus successfully clones himself twice and clones a young baby of Goal you can already tell that things are going to get a bit crazy. The reason for cloning himself is fairly straightforward; in Rufus' mind, at the current stage in the story, Rufus must save Goal, stop the Organon and contact the Rebels in Porta Fisco, but he's not got the time to do all three at once, so of course the easiest solution is split himself in three, the concept works really well and much like a multi-character story at any time you can switch between Rufus' to solve puzzles in their three respective locations with the actions of each crossing over every-now-and-again, better yet it doesn't come across as a gimmick!.

If there's one thing that's for sure, Goodbye Deponia was to go out kicking and screaming and the writers sure seem to have had a lot of fun with the games' dialogue this time round, most notable of all was a harsh jab at Secret Files: Tunguska who's plot was likened to a dry, long and thin stick, don't worry though they aren't just poking fun at other games, and at times Goodbye Deponia certainly doesn't take itself seriously; with reference to certain elements picked at in online reviews, jokes that were lost in translation, and the illogical, seemingly random combination puzzles that you will find yourself trying out when particularly stuck, some adventure gamers may find it a little self-indulgent, however I could not hold back the laughs, bravo Daedalic!

Not only is the games' situations and humour particularly colourful, but its visuals are too, and Deponia's hand drawn world can win anyone over in the endearing universe that developers Daedalic Entertainment have created. Though in all fairness, it's not just the visuals they've got down to a tee! The Deponia series as a whole includes an absolutely brilliant soundtrack not even taking into consideration the memorable song at the start of each chapter, in fact what you get as a result is a complete package; catchy music, beautiful visuals and most important of all, voiced characters spouting humorous dialogue with feeling! 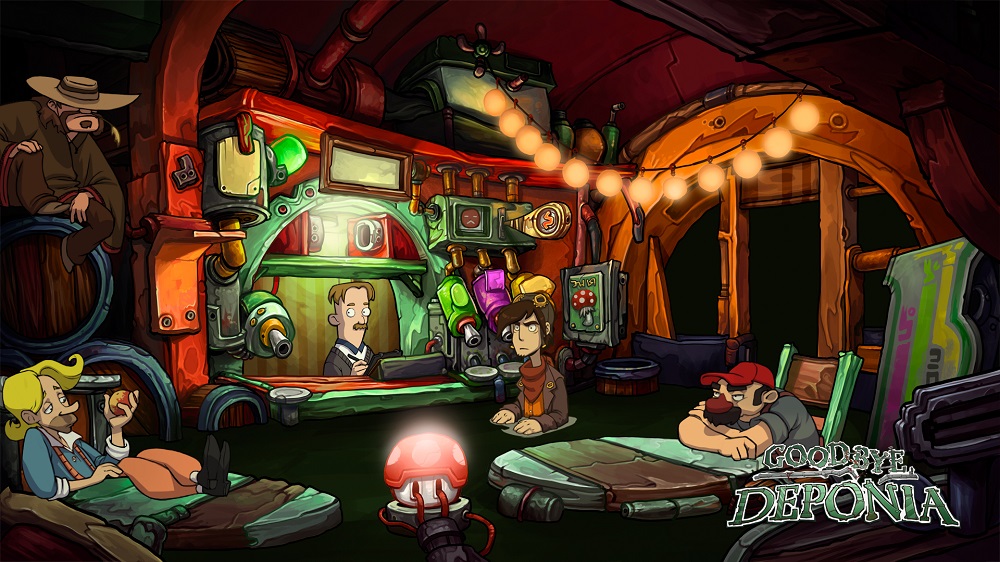 Unfortunately the game does still suffer from the illogical adventure game logic of yore, something that the series has continued to supply religiously, which can, in all fairness be explained by the extraordinary nature of your main character Rufus, who's seemingly bizarre and absurd plans somehow manage to make a little sense in the grand scheme of things, however some in particular can prove a little difficult to grasp, such as getting an ink print of a particularly creepy man that likes the presence of small children. Combination puzzles will always have adventure game fans sitting on the fence, and you may well find yourself stuck at what to do in more than a few locations, I'm not a big fan of them myself, but even the toughest of absurdities will raise a little smile.

So the game's not perfect, and myself and many others will have a bone to pick with the frivolous nature of its puzzlers, however one thing that Daedalic do ensure is that in anyone of their games you'll never find yourself missing that all important item required to progress, well you can track it down, because at the touch of a button, you will initialise the glorious hotspot system that notifies you of any interactive elements in your current location that you may have missed, it doesn't exactly tell you what to do, but can point you in the right direction.

One thing that was for certain was that the final chapter in the Deponia trilogy would not simply dribble out, this is a game so colourful and exuberant that it has to go out with a bang, and whether it's the puzzles you have to solve, the new Deponians that you meet, or the challenges that you face, there has never been so fitting an conclusion to a video game series.

If you have been holding out for Rufus truly doing good in his own misguided way, you will not be disappointed with Goodbye Deponia that really goes to prove that even a man so stubborn and foolhardy as Rufus can change, there's really is no better a send off for this brilliant adventure game trilogy.

Goodbye Deponia is available now for Windows PC and Mac as both a standard and premium edition for £16.99 and £19.99 respectively, you can pick it and the previous two games up from all good stores and digital distribution sites, you really won't regret it!