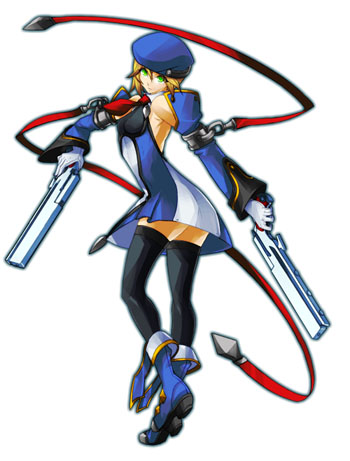 Six months after being released in the arcades and on home consoles, BlazBlue: Continuum Shift 2 finally makes its way on to the 3DS. But does it do enough to stand out amongst the big names of Street Fighter and Dead or Alive?

The controls are fairly straightforward; using the thumbstick or directional pad for character movement, and the four face buttons deal with the four attacks: weak, medium, strong and special. All four face buttons, along with the required motion on the directional pad, can perform special moves, but it is predominantly the special attack button that will be utilised in throwing out more impressive attacks. There are also Heat moves that can be activated with the appropriate command and with the Heat Gauge (a special meter filled by attacking and defending) filled to either 50 or 100 per cent. These moves are heavily damaging attacks that often require the opponent to be standing in a specific area of the screen, and leave you open to counter attack if missed. Rounding out the expected roster of moves are the usual throws and counters, along with the more unusual feature of double jumps.

While all fighting games have a focus on performing combos and special attacks, BlazBlue, like its precursor Guilty Gear, takes this to the extreme. In a game like Street Fighter, you can often manage to get quite good results against the AI (and some players) by throwing out the odd special move and hammering on the attack buttons. In BlazBlue, this will only get you so far before the increasingly difficult AI starts to block and counter everything you try and throw out. In order to make any headway you have to get to grips with the game’s many nuances and learn the intricacies of the characters.

Thankfully, this is made as straightforward as possible by one of the most robust and in-depth tutorial systems I’ve seen in a fighting game. And it definitely needs to be, as the list of mechanics is long, potentially overwhelming for a new player, and full of game-specific terminology that you’ll struggle to remember in the midst of a fight. The tutorials run the gamut from the basics of moving, attacking and blocking, through special moves and counters, and into complex systems like Guard Primers and Break Bursts. 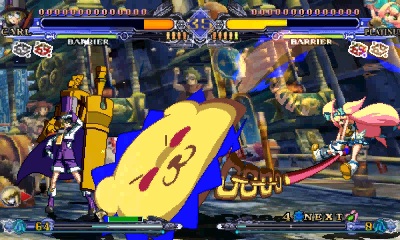 However, going through the tutorials and understanding the mechanics will only get you so far. For that extra edge there’s also a Challenge Mode, which sets out a variety of challenges to follow to give a more in-depth analysis on a character-to-character basis. Playing through a variety of challenges will give a better idea of how to play an individual character and allow you to stand toe-to-toe with the tougher opponents in the Arcade Mode. You will also learn all-important combos for your chosen character, which is where the bread and butter of BlazBlue’s combat system lies. Once you can reliably perform a couple of combos, you will find combat much easier, and you’ll start to make sense of the fighting system that relies more often on finding openings through which to unleash impressive-looking 20+-hit combos.

Aside from the training modes (Tutorial and Challenge), there is the obligatory Arcade mode; featuring a sequence of ten battles, ending in a fight against the game’s difficult to beat antagonist. Also included, for those interested in knowing exactly what’s going on, is a separate story mode which acts more like an anime television series or visual novel, giving a background to the BlazBlue world, the previous title, and allowing you to play through each character’s story arc. Each scene is nicely presented, though largely static, and is fully voiced. In addition to the story modes is a Versus mode, which is simply a 1-on-1 battle with an AI controlled opponent.

Where BlazBlue starts to stand out from the competition is in its additional modes. These take the form of Legion 1.5 and Abyss. Legion 1.5 tasks you with defeating opponents in order to recruit them into your own personal army so you can conquer an entire map. There are multiple routes available around the map and often multiple opponents in each fight, and you are tasked with defeating them in order to bolster your own forces. Should your current champion fall, they are replaced with one of the recruited characters, and the cycle of fighting and recruiting continues until either all your current champions are defeated or there is no one left to fight. It’s an interesting and unique use of the fighting game formula, and adds a certain degree of high-level strategy that is not often utilised outside of real-time or turn-based strategy games. 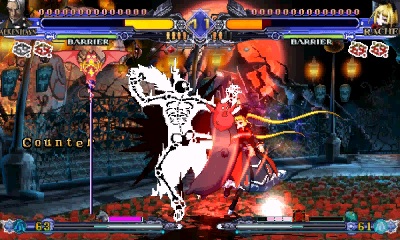 Abyss is a little more straightforward, but no less interesting. You have one character and one chance to win; lose two rounds and it is game over, just like any other mode. The interesting twist is in the progression down the Abyss. Moving down the levels pits you against increasingly more difficult foes, some of whom gain tactical advantages (faster attack, higher movement speed). But as you defeat more and more opponents, you are able to pick upgrades for your own character; increasing their abilities and allowing you to not only mould them to your liking, but also allow them to stand up to the tougher characters further along. It’s a RPG-lite formula that works very well, and certainly encourages extended play.

Which actually leads on to the problems with BlazBlue: Continuum Shift 2. The game itself seems to drain battery life more than other titles I have played, and even in sleep mode will not last particularly long, which is an issue when the game contains modes that encourage extended play. Also of concern is the 3DS itself, which does not lend itself particularly well to fighting games generally, but BlazBlue specifically with its focus on complicated, multi-button, multi-input combos. There were a few times I had to stop playing in order to rest my hands and stop myself from getting cramp.

The 3D itself is also fairly pedestrian in implementation. It works well enough, bringing the characters out from the backgrounds and giving everything a nice sense of depth, but it doesn’t offer enough to make it truly stand out as an example of ‘3D done right’. In fact, as the game is already layered when in 2D, all the 3D does is make everything stand out a bit more. It’s a noticeable difference, but not one that impresses past the first few fights. 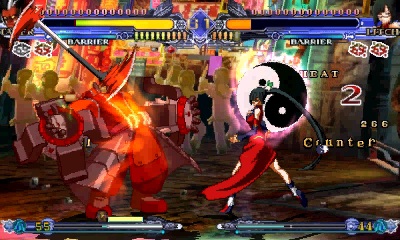 But none of these issues are entirely the fault of Arc System Works. Some of these limitations can be laid at the feet of the platform, and there is a lot to like about the 3DS port of BlazBlue. The move list is handily placed on the bottom screen, allowing you to quickly and easily flick through the moveset and look up special attacks. Every game mode gives you experience and money that can be used to unlock a wealth of additional bonus features; extra costumes, story movies, artwork, soundtracks, and an abundance of goodies for those who like to unlock things. There is a large stable of unique characters to pick from and master, a WiFi mode for playing against human opponents, and enough content to keep any fighting game fan busy for a very long time. And it’s all wrapped up in high production values and beautifully animated 2D fighting.

Still, it’s difficult to recommend BlazBlue: Continuum Shift 2 outright, as the steep difficulty curve and sheer volume of things to learn aren’t going to be to everyone’s tastes. And the actual controls on the 3DS, coupled with the fact it’s not entirely portable due to short battery life, don’t make this the ideal way to play the game. But there’s no arguing with the amount of content on offer. The number of modes, characters, unlockables and things to achieve and strive for makes this a package that any fighting game fan will be unwrapping for months. If you’re a BlazBlue fan this is definitely one for you to check out.