Gentlemacho is a gentle but manly brute’s hairy adventure across the world made single-handedly by LoÃ¯c Dansart a full time independent game developer from Belgium, Gentlemacho is a funny and lighthearted side-scrolling platformer that was created for the Microsoft Dream Build Play Old Spice Challenge 2010, Gentlemacho is a game ruled by absurdity, and it’s genuine innocent charm brings it above most XBLI Games. 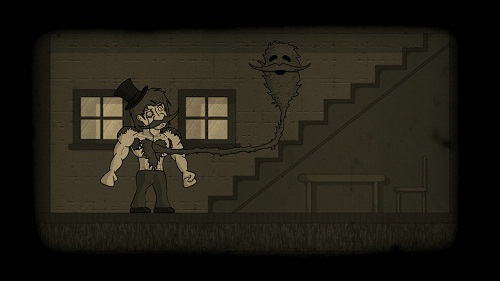 We checked out Gentlemacho for its homage to 1900’s silent films, and the stereotypical English ‘gentleman’ that the game centres around, however because the designer LoÃ¯c chose not to keep the 1900s aesthetics inside of the actual game itself, Gentlemacho feels almost fractured; you’ve got an adorable odd-ball storyline that turns into a rather flat platformer as soon as the music cuts out, and the film grain is taken away, the game looses a lot of it’s magic, if the appropriate 1900s film effects and music were kept in the game, it would have felt more dynamic, and more importantly; complete.

The story and writing is perhaps the most effective characteristic of Gentlemacho which is written very wittily, keeping in tone with the 1900s theme, the concept of the game itself is a great success. The idea that Gentlemacho has superhuman senses that are hindered by his hairy sweatiness, thus requiring him to find samples from four of the freshest places in the world just adds to the games complete insanity, and Lazer-Shooting-Flying-Rooster-Shark’s, Kitten-Yeti’s and pooing parrots, although very strange gives the game a certain allure, without it going into the territory of stupidity, even if the last boss was a bit disappointing due to its lack of absurdity.

Unlike your usual platforming hero, Gentlemacho does not jump on his foes, instead he has the ability to extend his body hair, allowing him to smack his enemies with his moustache, or hair, or escape sticky situations with his ‘Armpit Evasion’, what LoÃ¯c has done successfully with Gentlemacho is he has created a really engaging character, but unfortunately doesn’t suit the game world that he is in. 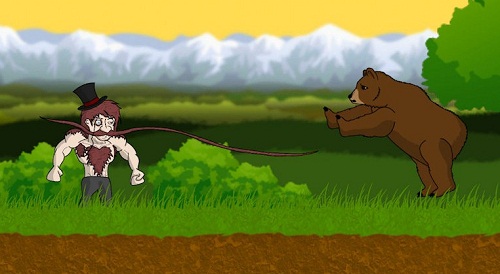 Level design remains something to be desired, of the three levels the assets are very nicely drawn, and the parallax scrolling is perfect! But there is not much imagination to the placement of the levels, particularly Fiji which is basically one flat plane, a tad more variation would have helped this greatly.

Gentlemacho is quite a short game, and perhaps doesn’t stick to its 1900s silent film aesthetics as much as it could do, however it is crazy and zany, and probably one of the most unique titles on XBLIG where you can evade enemies with your armpit hair. At heart, its strongest point is its concept, although the game is brought down by a few issues, if I were rating it in terms of games that you could buy on the shelf it would only get a 2/5. However as an Indie game it deserves an extra point, the concept of the game is marvellous, and quite an achievement for one man, it’s just unfortunate that Gentlemacho doesn’t seem comfortable as soon as the film effects are taken away, regardless of this his character is so sensational that we’d love to see him again.

Gentlemacho is available now from the Microsoft Indie Games Marketplace for 80 Microsoft Points, for its concept alone; the game is worth a purchase!