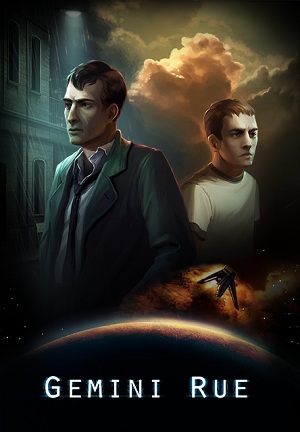 It's not everyday that you see an independent point and click get picked up by a well known publisher, especially in the Adventure game sector. However be ready to be even more amazed as it's not just an indie point and click, it's a student produced point and click that has singlehandedly been created by Joshua Nuernberger, with the exception of the music, the voice acting and the use of the Adventure Game Studio as an engine. Gemini Rue was picked up by Wadjet Eye Games; the publishers of The Blackwell series and Emerald City Confidential and now Gemini Rue has gotten a full blown release.

Set in a dystopian future where quadrants of cities have been taken over by a crime syndicate known as the Boryokudan, Azriel an ex-assassin is on the hunt to find someone which has led him to the planet of Barracus, however information is expensive and not something easy to find unless you want to risk your life, which Azriel seems that desperate to do so.

One huge influence you could find when playing the game is Blade Runner, with a similar setting and film noir style conventions while also being set in an almost similar futuristic environment. However of course the game takes more filmic conventions from neo noir than it’s predecessor however that can be argued about anything not created in the 1930s.

One thing you will realise in the game is that it’s not just within some tiny environment that’s been thought up, it’s much bigger than that, this will firstly dawn upon on you when you're told to find information on a man known as Mattius Howard from a planetary database. If you decide to explore a little like any frequent player should, and you happen to zoom out on the map you’re then able to see all the planets in the Gemini System, this is when you realise how big this world you've jumped into is.

Indie development is something that I've always been a fan of, especially when you can see how much love and dedication has been put into a product, Joshua Nuernberger started working on the previously named Boryokudan Rue back in his senior year of high school and then kept at it throughout university, which finally resulted in getting the game a prestigious IGF award from the student showcase. Thanks to this award Gemini Rue was then taken to various events. Gamercast first got to see Gemini Rue at Eurogamer Expo 2010, sadly it isn't the kind of game you want to play for a few minutes at a games expo, but it was still possible to take in the atmosphere that the game sets out, as well as all the details that you'd want to know, causing you to gain a need for the game. 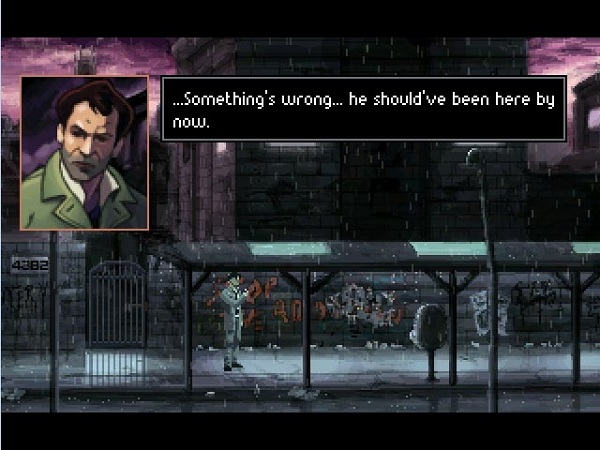 The majority of the puzzles found in Gemini Rue are more logical and help if you pay attention as opposed to dumping a puzzle in there that bears no resemblance to the actual game. Like most adventure games, Gemini Rue requires you to pay attention to what you see in rooms as you may need something that's in there later. There isn’t a large amount of thought of combining objects though so you won’t go through a crazy Gabriel Knight 3 like situation, this means there is a lot less frustration with a play through, which creates a rewarding experience as frustration over a puzzle doesn’t create a memorable experience for a game.

Before you decide it's just your average point and click think again, it's taken more inspiration from Blade Runner than the visuals. There is also cover based gun combat, but don't get put off by this, they don't change the perspective of change the whole game round when starting combat. It fits in amongst everything really well and is actually a nice change in pace as well as requiring more skill than just clicking a button. The gun combat really helps set it aside from your average story driven game, as it also adds more of a relationship between you as the player and the characters as they’re picking up the gun for the first time too, giving you a need to learn and not just picking up a gun and knowing what to do instinctively as some other games seem to attempt.

Another feature of Gemini Rue is that you play through the story as multiple characters, sadly it isn’t a 'choose your path' kind of game play allowing you to constantly see it only from one side which would add replay-ability. But that doesn’t mean it works badly, far from it, sometimes at certain points in the game you will have the choice to actively switch between ongoing storylines so you can get a piece of the action simultaneously. Or if you did happen to get stuck as one character you can have a breather and go play as a different one for a bit. It's really nice to see what the Boryokudan are doing from both sides of the story.

Someone who is not loving of all forms of artistic merit, or fans of the current generations graphics may look at it as a mass of large pixels with lesser detail than what you may expect of a game these days. Gemini Rue still stands out, even from the main menu you are enthralled with it's simple visuals of rain hitting a street in Barracus, it helps set the atmosphere of the game you're about to play, but it’s not just the visuals, tie them together with the ambient audio and music and you have the perfect atmosphere laid out in front of you. It's a gritty pixel mess of beauty, with finer details reserved for the character portraits you find yourself captivated by this beautiful atmosphere that makes you think back to playing Another World. 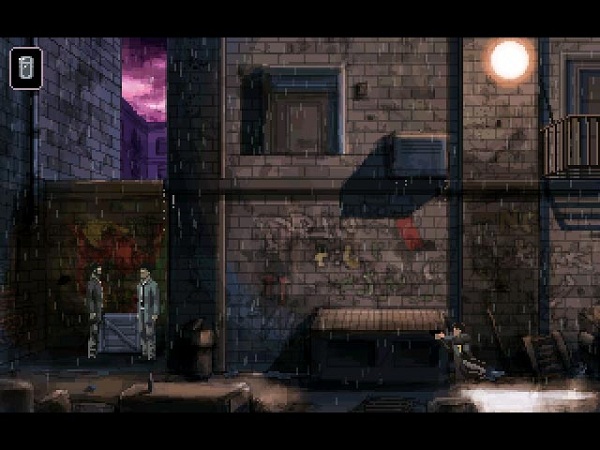 Gemini Rue isn't exactly your everyday point and click, it's definitely something a lot more special than that, you can't look at it and expect the norm. It does of course lay out fundamental gameplay mechanics that a player may or may not be used to, but with these it creates a deep and entertaining experience that will leave you wanting more. I can only hope that Mr. Nuernberger is deep in development of his next game.

Gemini Rue can be purchased directly from Wadjet Eye Games as either a direct download for $14.99 there was also a limited edition available for $24.99 which includes a boxed copy of the game, developer commentary, the soundtrack and access to a digital version to download, sadly though it's now out of print if you wanted to pick up a physical copy.