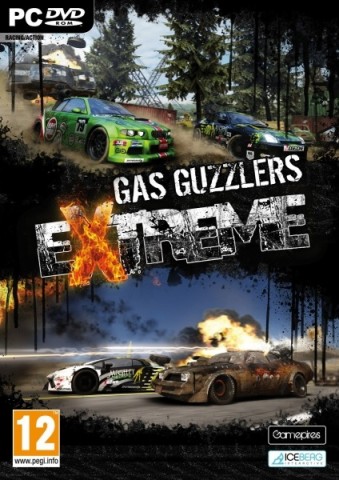 You don't often find yourself sat in the driver's seat of a fully customised and armed three wheeled car -you read that right- with your foot on the pedal ready to leave on green with the full intention of blasting your opponents away as soon as you're allowed, well you used to find it, but it's a subgenre of racing that David Jaffe himself has come to realise that it just doesn't cut it anymore despite being such a fun and satisfying idea, but does Gas Guzzlers Extreme tick all the right boxes?

Gas Guzzlers Extreme is pretty much the game you expect of a destructive racer, it delivers good, hard, brutal fun in a racing environment with a nice bit of added humour. Rather than smashing into your opponents or transforming, the destruction in Gas Guzzlers Extreme comes a selection of weapons that can be installed on the roof of your car. In Gas Guzzlers Extreme your time will be spent peppering your opponents with satisfyingly effective weapons, and relying on powerups littered throughout the tracks that provided much needed support and a little extra firepower. 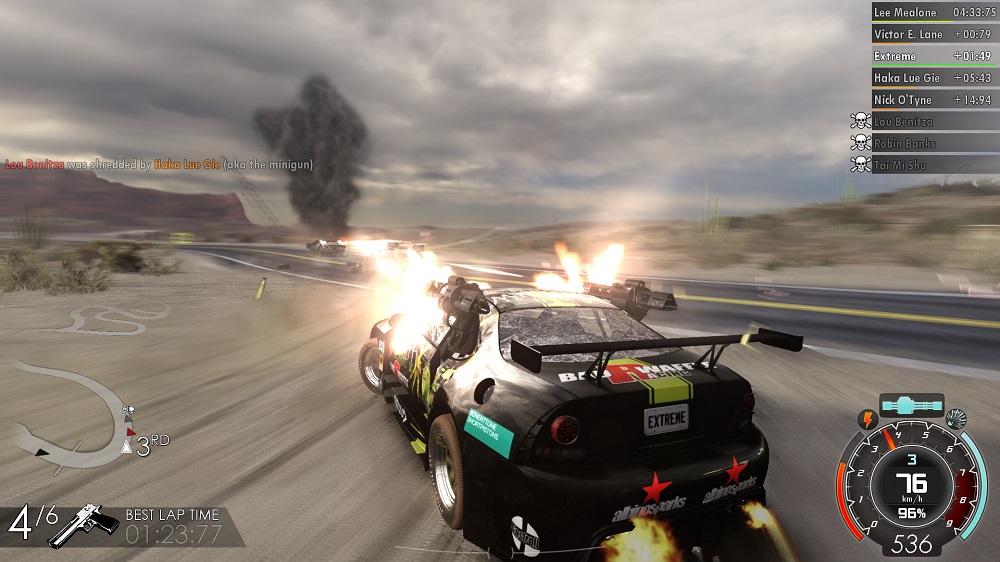 A large portion of Gas Guzzlers Extreme can be spent in the single player campaign that sees you play through cups and tournaments as you work your way up the ranks taking sponsors and buying new cars. When you start out in your Gas Guzzlers campaign you'll find yourself racing around with laughably low performance cars such as the wanna-be Robin Reliant, until you steadily climb all the way up to the 'Masderatti' and high-performance sports cars, there are no licenses in this game, just a lot of very familiar looking vehicles.

Gas Guzzlers Extreme comes with three typical race types; your standard power race that acts similar to a circuit of Mario Kart, no guns, just powerups like oil slips, nitrous boosts, land mines, shields and generally semi-dangerous abilities, it's great for those that want a race, but they're otherwise pretty tame, and as far as competition goes, all you'll really find is a little rough-housing as you concentrate on the race itself.

However if you're looking for something a bit more aggressive then Battle Race or Knockout is where you want to be, if what you want is no-holds-barred competition, these to modes let you lose with your chosen weaponry as soon as possible, however you won't simply be aiming to destroy your opponents , as you'll still be racing to first place, however if there's no other racers then you automatically win, quite possibly the best and most satisfying way to win if you aren't the best driver of the bunch but do have a damn good aim! 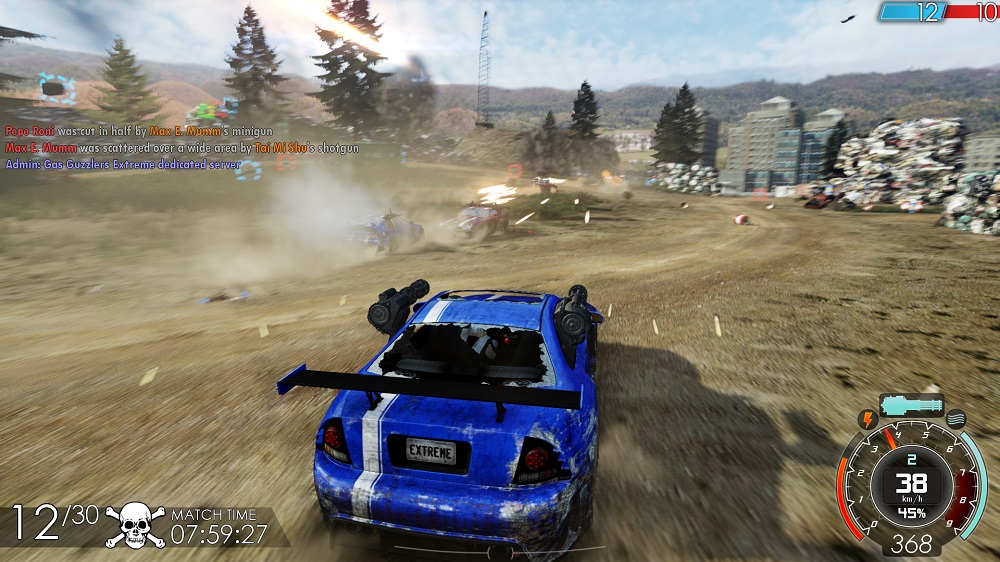 However to make things a little more fair, you can't simply lay waste to your enemies as soon as you start your engine, and if you're playing in a Battle or Knockout race you'll find that you will be unable to fire your mounted weapon until you pass into the 'free zone' where you can blast away at your opponents till your heart's content! Better yet you can do so with all manner of satisfying weapons including chunky shotguns, railguns, rockets and grenade launchers to help chip away chunks of their precious health before they sneak in a repair.

Once you progress further into the campaign you'll gain access to another three race types that are even more self-explanatory; Death Match, Last Man Standing and Tournament races, these help to insert a little more variety when things start to get a little samey, which honestly you won't find happening very often thanks to secondary objectives, these are present in every race and may involve ensuring that a certain racer does not finish in the top three places, or perhaps that you take three down in a certain manner, each objective adds a little extra cash into your coffer that you can save up for that flashy new car, or perhaps spend on improvements for your current vehicles.

One important factor that appears to be synonymous with the subgenre of destructive racers is good old fashioned black humour, and you can expect bucket loads of it in Gas Guzzlers Extreme from your very first sponsor 'Mighty Cock', the names of your competitors, even the commentator on your races can be voiced by some hilariously cheesy Arnold and Duke impressionists, and better yet the humour never feels as though it gets too immature. 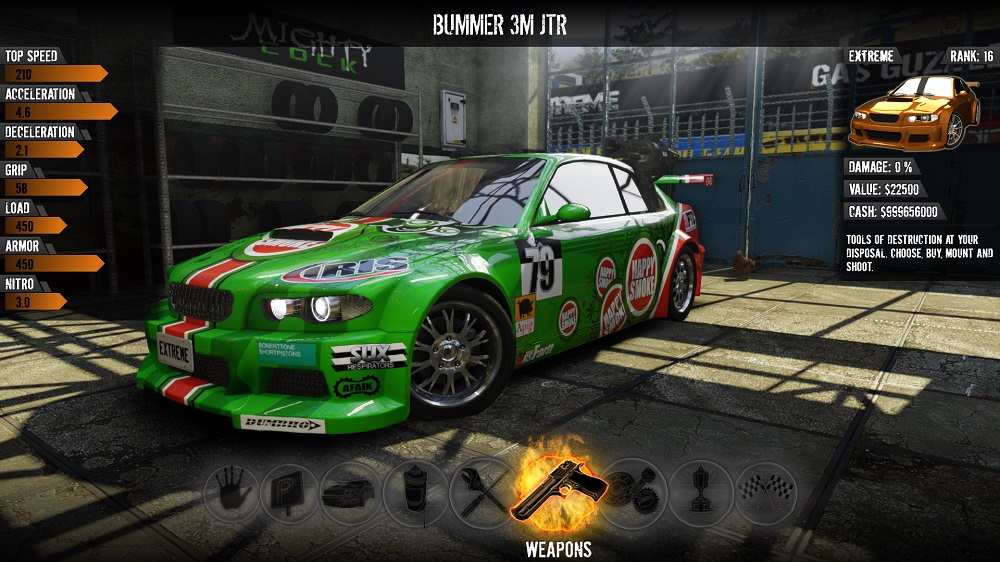 Now I wouldn't come to Gas Guzzlers Extreme expecting a simulation racer, with the territory of a race'n'gun game comes the blissfully simple arcade racing experience, and Gas Guzzler provides as you'd hope; the physics on the cars aren't perfect but you'll certainly feel the difference between the sluggish low performance cars as you careen round a corner compared to the high speed drifts of the more flashier models, it provides handling that anyone can get on board with, but simulator extraordinaires will not be pleased.

As well as the main single player campaign, Gas Guzzlers Extreme also comes with a standard quick race which does limit you to using any of the cars you've already unlocked in the campaign, but fulfils that sudden itch that a campaign mode just doesn't provide. However that very same itch can also be scratched with the game's multiplayer mode that supplies a superior racing experience with a few extra game modes. Unfortunately during my time playing I found it difficult to find a particularly full server that hadn't already started racing.

From dusty deserts to race circuits, seven different environments will serve your tracks, full to the brim with shortcuts to lose that loose cannon you just can't shake off your tail, and perfect to shave a few seconds off your laps in a race, none of the tracks themselves are particularly memorable, but it is particularly great to see a racing game embrace shortcuts quite so much, I've not played such a manic game in quite some time. 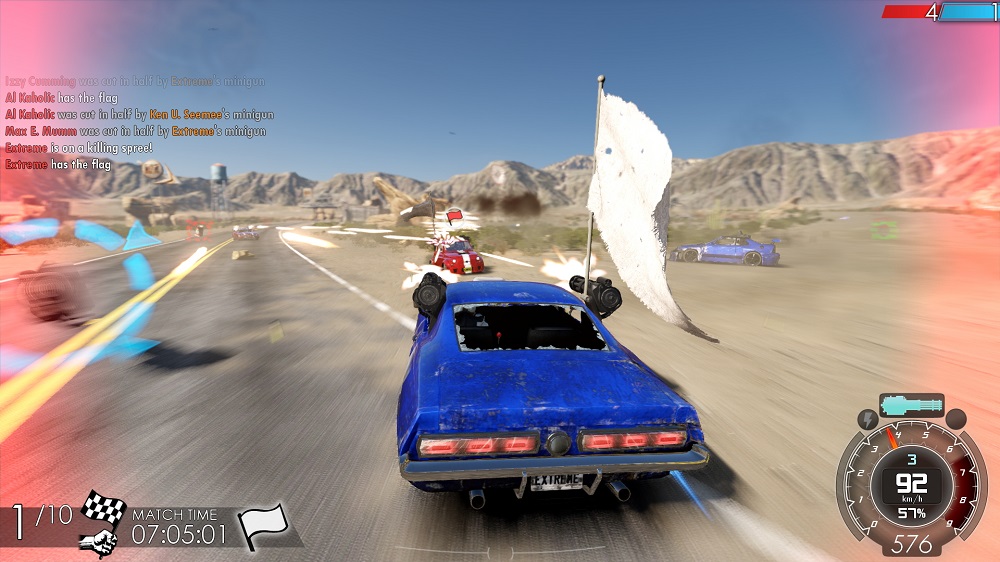 If anything, Gas Guzzlers Extreme is downright honest fun, whilst it's not going to win any awards, it fills the hole that the likes of Destruction Derby, Vigilante 8 and Carmageddon have left vacant for far too many years, the online servers may be a bit sparse but if you're ok with wrestling with the AI get ready to have some fun!

Gas Guzzlers Extreme is available now in stores and via digital distribution sites for the SRP of £18.99.