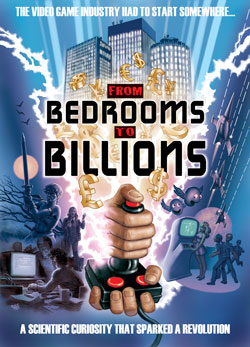 There are lot of things for you to "back" these days with the Kickstarter/Indiegogo boom some things are good and some less so. Meaning you have to be a little careful with where you pledge your money. But some just deserve your money based on brilliance, be it a game or something else, in this case I wanted to mention a documentary that focuses on an item that is very close to most of us, the rise of the bedroom coder; the UK Games industry.

The documentary is titled; From Bedrooms to Billions and the key focus of the film is the UK games industry between 1979 to 1996 and aims to be a 90 minute documentary (although I could watch hours and hours of the stuff!) which looks to key players in the shaping of the video games industry during the start of the boom.

They plan to, and have interviewed people such as Charles Cecil, David Perry, Anthony Crowther and David Braben to name a few. You can watch the trailer for the documentary below which gives you an idea of what to expect.

The perks when backing include digital and physical copies of the film as well as posters or signed consoles and games dependant on how much support you want to give towards the making of the documentary.

Their goal is $35,000 and they’ve only got 14 days to go to get just under $8,000 they need in order for it to be funded. So if watching a documentary about video games is your cup of tea I urge you to give them a bit of money, $25 will get you a digital copy of the film, and it helps towards their goal, so have a think and watch the trailer.