For those that are unaware, Final Exam is somewhat of spinoff or reboot of the cult survival horror series Obscure, personally I remember the games fondly, however they were a little clunky, unlike the original series, Final Exam is not a survival horror, it's also not set in a school, so in fact it couldn't be any further from Obscure, except for in spirit. Legacies aside, what the game is, is a brilliantly vibrant, fun and challenging side scrolling platformer that asks you to hack'n'slash your way through waves of gruesome enemies to reach your fabled Alumni Party, are you ready for the Final Exam?

Final Exam could probably best be described as somewhat of a throwback to the sort of addictively challenging games you'd play when you were younger, the aim of the game is to achieve a magnificent score and beat down a lot of grizzly supernatural enemies whilst you're at it! Its bold, bright and chunky graphical style sure sets the game apart from its contemporaries, and it supports almost all of the configurations you'd want; solo play, offline co-op and a brilliant online four player co-op, so whether you're a billy-no-mates like me, have a partner who wants in on the action or a posse of friends ready to follow you to the grave, you're catered for, just don't go asking for a mix of local and online co-op, they've got to draw the line somewhere unfortunately!

Now I'm going to let you in on a little secret, I'm not a very big fan of generic hack'n'slash games, I find them mindless, repetitive and pretty dull, and it's not just me, sit most people down with a Dynasty Warriors game and many will find little that entertains, Final Exam on the other hand provides a rich, interesting and most important of all; fun atmosphere for you to get suckered into, it might just be down to the fast paced, short term action that appeals to the impatient player within me, but I do think the game has a lot of fine points that really helps. 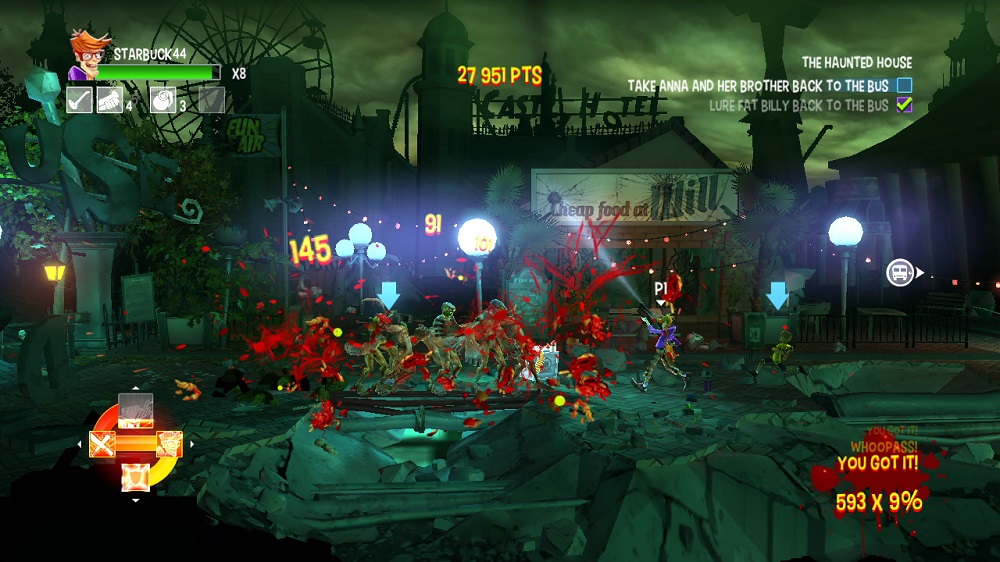 If you're not a big-old loner like me and prefer the company of your online chums you'll be chuffed to hear how Final Exam supports four player cooperative online, which due to the nature of the game can make for brilliant cooperation; whether you're the sort of team that likes to work together ensuring that no man is left behind, or you're a team of doers who would prefer to get every objective claimed or goal achieved in the quickest amount of time possible, the online multiplayer is actually real good fun if you can find a match going, luckily the game allows for private servers so you needn't play with a bunch of weirdoes that you don't know! There is one slight downside to the game's online however.

As a game based very heavily on score, combos and time, it's not difficult for a level of Final Exam to get extremely tense, the ability to manually bank your combos does make for an effective system, however even banking your precious points will not save you from the potential weak link in your party, that's right, one slipup from any of your teammates and you can say goodbye to your precious combo, you're playing as a team after all, so if you hook up with some duds you'll find yourself cursing the sky with frustration. It's a bit of a controversial design choice, and whilst it might be alright when you only let yourself play with winners, someone's got to play with the losers right? 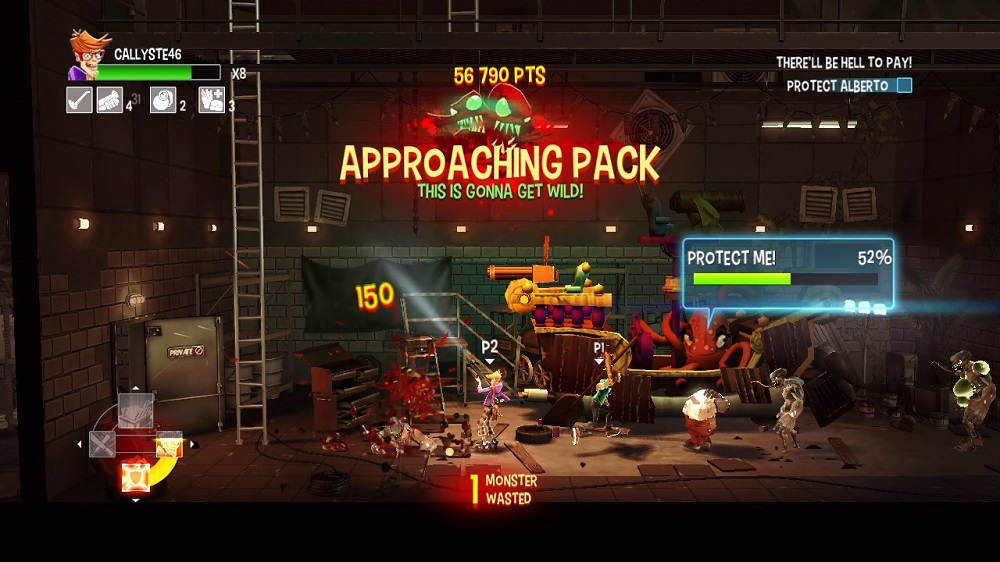 So Final Exam is all about the score in a big way, although points don't mean prizes, they do mean a gloat on the global leaderboards, it might not be what you were hoping for, but at the very least in Final Exam you can say you had a fun time getting there! Why's that you ask? Well the combat in the game is kept effectively fresh with the variety of moves and specials attacks that can be unlocked for your characters, not to mention the host of different enemies that you will encounter whilst you carry out a range of objectives. Then even when you've exhausted the solo or cooperative campaigns, there's still the Time Attack mode where you will need your ability to cash in combos to become second nature, if you don't you'll never make the cut... that is unless you can carry out a perfect run throughout an entire level!

Good luck with that, because when you realise that the amount of creatures you'll encounter in Final Exam is by no means sparse, and the variety of enemies will grow from basic Hitters, Kamikaze units, Spitting winged creatures and bulky Tanks will put your skills go the test, and whilst you'll only get a mild challenge at the Regular difficulty setting, if you crank it up a notch you'll find the rock hard co-operative game that you've yearned for since the incredible Dungeonland. These aren't your regular opponents either because Final Exam is the first game in a long time where I have experienced enemies following you up ladders and escalators! Suffice to say, the AI is most certainly not going to win awards, the same could be argues with the bosses that exhibit satisfyingly repetitive patterns, these would generally be disadvantages in a game these days, and yet it feels so fitting!

What makes Final Exam so satisfying however is the skill system for each of your characters, the game rewards you for attaining a high score, finding all of seven drinks cans throughout the level and tracking down the new melee and ranged weapons hidden somewhere in a crate, completing this bonus objectives will award you points to spend on your characters profile and skills, unfortunately over 50% of the skills on offer are pretty much the same for each character which makes the system feels somewhat condensed when you realise that your character will end up practically the same until you get to the later levels where you're able to utilise your character's special moves more frequently, until that time comes you'll feel a bit like a regular burly character. 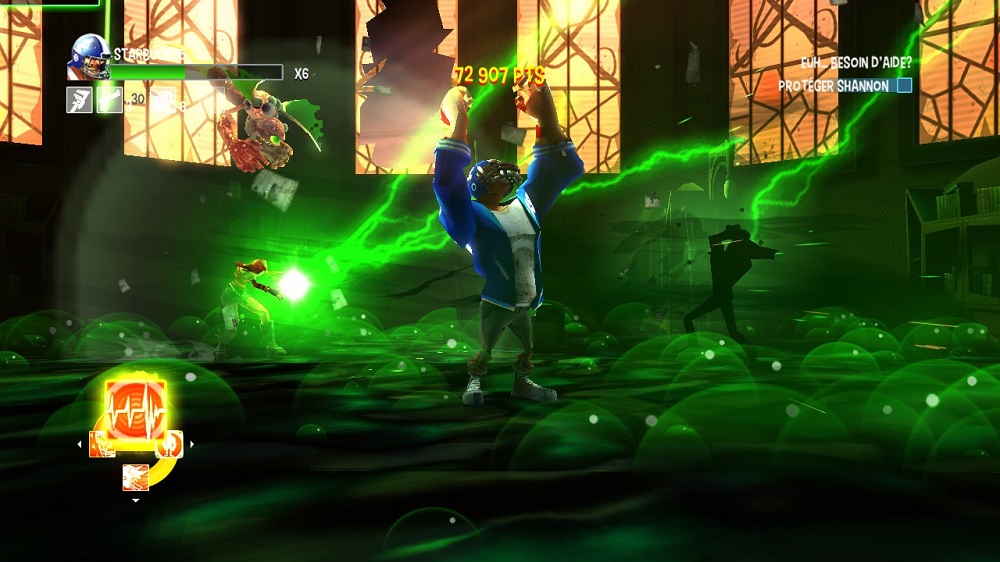 In fact, until you are able to fully utilise your character's special moves, you'll find a lot of your time is spent acting like the most stereotypical character of the lot; Brutal Joe the star quarterback. However it's when you see characters like Nathan the nerd and Cassy the dancer pulling off some pretty brutal moves the originality of the combat system does seem a little off, thankfully it doesn't make it less fun, just a little hard to swallow. At the very least each character has their own specialisations.

If you want to be a little different, when pile drivers and uppercuts just don't cut it each character has a number of special moves, such as Brutal Joe's charge, Cassy's dangerous dancing, Nathan's electrifying gadgetry, or Sean's quickfire shooting, the only trouble is, in order to use a special you'll need to smash in as many heads as you can to gain precious fury points. The only trouble is you'll find that they are used up far too quickly, thankfully if you manage to progress your character's through their skill trees you'll find the ability to gain more fury quite the convenience when you can afford the upgrade, it just means that before that happens you'll want to get used to the standard combos, which is by no means a bad thing.

Quite possibly the best thing about Final Exam is not the deeply satisfying combo system, the wrestling move type combat, or the ridiculous rock hard mode, no its the high school vibe! The kids may have grown up, but everything about Final Exam just exudes the 'rad' exuberance of the 90s. Mighty Rocket Studio have got the feeling down to a tee, and the vibrant menus, bold fonts and overall atmosphere of the game just makes me want to sit on the floor and stare up at my monitor in childish wonderment, it also helps that the game offers a very classic experience, and if you're a bit of a hardcore gamer, just wait until you play Rock Hard mode where you've only one life, and the enemies will bite off a fair chunk of your health!

The game itself isn't exactly monumental with only eight episodes in the story, especially when you consider that each takes about 20 minutes to an hour depending on just how ruthless you are, and whether or not you bother with all of the collectables scattered around the levels, but of course it's really up to your playstyle, however if you do spend twice the amount of time in a level finding all of the collectables you'll save time in the long run by benefiting from new skills, weapons and improved stats that will help 'future you' out when they're fighting two tanks at once with the progress of an overall 'noob'. 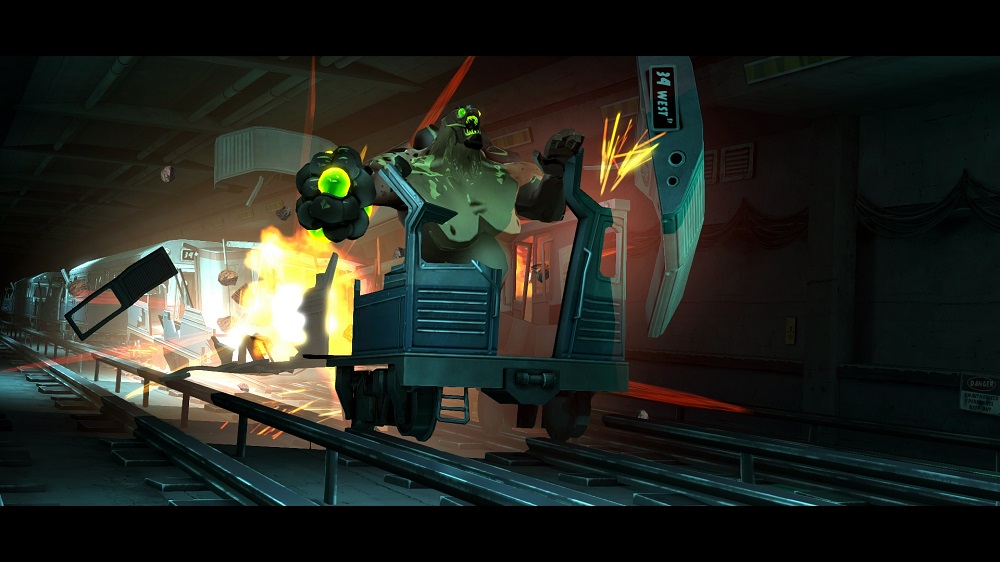 The game does not place a heavy emphasis on story which is unfortunate, and funnily enough for a game based on an Alumni party you'll actually find you spend more time in the areas preceding the school rather than at it, areas like underground subways, a theme park and a few more subterranean areas. The levels themselves are big on exploration, much like a metroidvania, some doors only open when you've achieved certain requirements, opening up more areas as you progress through that you may not necessarily need to investigate, unless you want all the collectables.

For the Obscure fans amongst you that were too busy naysaying the game back when the game was simply titled Obscure, Final Exam really can hold its own, in fact the only area the game does suffer somewhat is in its narrative which is pretty bare to say the least. You can of course expect a return to Leafmore High as well as cameos from characters like Shannon, Dr Friedman and of course the overall high school/college vibe with the vibrant colour schemes and use of language, just don't go expecting any puzzles! It may not be Obscure 3, or a true reboot to the franchise, but Final Exam is undoubtedly a lovingly crafted hack'n'slash that truly encapsulates the same high school feel of the other games in the series, so put the books away, take out your weapons and prepare to get messy!