Rev your engine to the max and get your slide on, in FIM Speedway GP 4 the newest simulation racing game from the makers of Dead Island. I'll warn you, if you aren't quick off the mark you'll never make it in the fast paced world of Speedway!

If you are unfamiliar with FIM Speedway, it is a necessity to first encounter the Training that allows you to run laps in one of the 11 arenas featured in the game, including the local Cardiff Millennium Stadium, and various European stadiums. Techland purchase proper licensing for their series, and true to the sport you can choose from the 15 drivers present in the game including Tomasz Gollob; winner of the 2010 Speedway Grand Prix.

Now it is important to not glaze over the training for Speedway, because it is unlike your standard motorcycle racing game, as everything depends on your capability to slide. The training is where you will find out if you can handle simulation racing; that is purely for the hardcore elite of racing fanatics, or whether you are an arcade driver. Simply getting your head around the tactic of sliding into a corner is a feat in itself, do not feel bad if you just can't cut it as a Speedway racer. 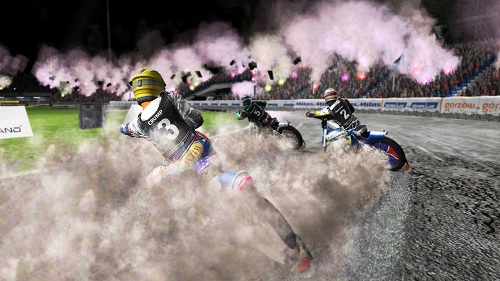 After discovering your true ability you can attempt a single race, which seems a bit pointless in the world of FIM Speedway where you race across a number of heats. If you wish to get more accustomed to FIM Speedway it is best to start out with a Single Match that allows you to race across four heats in a simulated grand prix session, as well as giving you the opportunity to tune your motorbike as you would in a GP Season or Career.

For the more involved of players there is the GP Season/Career Mode that allows you to pick a team, and then run four heats on 11 different tournaments across Europe. Depending on what team you settle with you may need to place a certain classification for the Season, or maybe just ensure that you do not crash in a tournament. These requirements add miles to a game that you could otherwise spend very little time in, and the depth of the Career Mode greatly increase the allure of the game.

FIM Speedway also features four player online multiplayer, allowing you to play as many matches in your favourite stadiums with your friends either via LAN or over the Internet, unfortunately we were unable to join the servers available due to version incompatibility, and no english updates present on the Techland website. 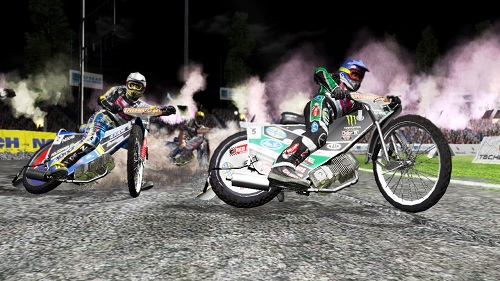 A hard rock theme plays throughout the menus and motivates you to get into the exciting exteme sports attitude of Speedway, however when you find yourself in a race there is almost no sound present except for the occasional rev of your engine and you smashing into the side barriers in what should be a grissly accident. Sound is an extremely important aspect to all racing games, and it is a surprise that the sound design appears to have been slightly overlooked.

Something that you will not be used to when playing your first FIM Speedway game, is that it is common for racers to be excluded from participation for a number of reasons that would not be present in a standard racing game; if you start too early and touch the tape you will be excluded, if you cause an accident you will be excluded, however the most surprising of all is if you leave the boundaries of the track, you will not longer be able to play in the race. These reinforce the simulation aspect of FIM Speedway Grand Prix 4 and remain true to Speedway, however they are very unusual to those ignorant of the codes and conventions of the race. If you don't want to adapt to their ways, then you may not feel at home in this series.

One issue when playing from a beginner's standpoint is that FIM Speedway is very similar to the old Hang On and Monaco GP Megadrive games; if you are not the first past the starting line you will not be able to catch up with the extremely difficult AI racers, no matter what difficulty you are playing at. Whilst veterans to the series will undoubtedly have no problems, FIM Speedway definitely has a substantial learning curve. 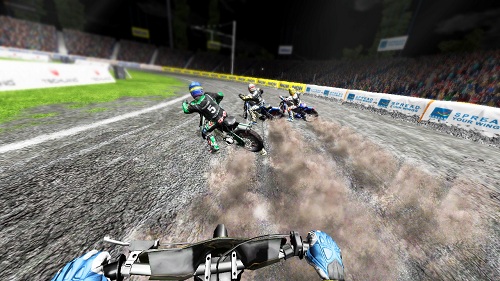 If you are unfamiliar with FIM SpeedWay Grand Prix, the racing does seem very quaint, similar to the great Indy 500 on the Atari 2600, you will find yourself tense up in ancipation as you slide through corner after corner attempting to best your peers. It is a simple system, but one that works extremely well, and it is no surprise that Techland have stuck to the series for almost 10 years.

Motorsports that do not involve cars have always proved to have a niche appeal, and FIM Speedway Grand Prix 4 is no different. With a complex simulation control system, but an involving and deep Career mode this is one simulator that will have you divided.

FIM Speedway Grand Prix 4 is available now for the SRP of £24.99 in all good stores, this fourth title in the series is a show that even the niche of sporting events will always have a place in video games.