A rather unusual announcement has been made on the upcoming release of Fate of the World — Tipping Point for retail from publishers Lace Mamba Global. To fit with the game’s message as much as possible, the packaging of the retail edition will be eco-friendly in order to reduce the carbon footprint and the impact on the environment as much as possible.

The game will be made as much from recycled materials as possible, and all papers used for the packaging and manual will be printed on paper from certified, responsibly forested trees and mixed sources including recycled paper.

The Amaray BioBox will be used for the DVD box that is made of recycled plastics and is fully recyclable and stable for its entire life but is biodegradable when placed in soil or landfill. 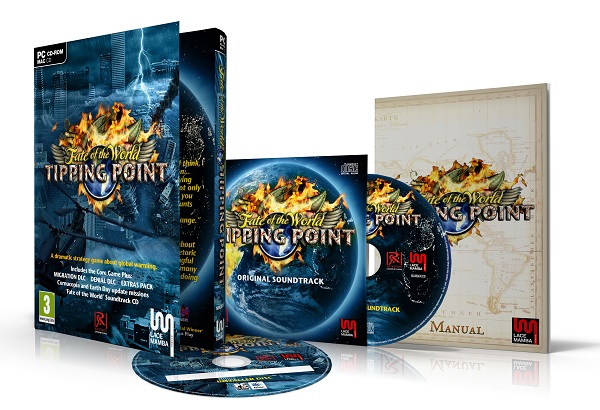 Fate of the World is the sequel to the popular award winning BBC Climate Challenge game, and puts the future of the world into your hands. The game features a set of scenarios that covers the next 200 years based on the latest science and climate models as researched by the Oxford University. Players are required to balance the protection of the Earth's resources and climate whilst fulfilling the needs of an ever-growing population that demands more food, power and living space at every avenue possible.

Fate of the World - Tipping Point includes the extra content packs; Earth Day, Cornucopia, Migration Expansion and Denial Mission in this retail Deluxe Edition. Possibly the most impressive aspect of Fate of the World is those behind it; with the Oxford-based dev team Red Redemption with David Bishop on hand to write the script, as well as Richard Jacques' musical composition, this is one serious game that anyone can sink their teeth into.

The new and improved environmentally friendly packaged deluxe retail edition of Fate of the World: Tipping Point will be released in the UK and Ireland January 27th 2012.