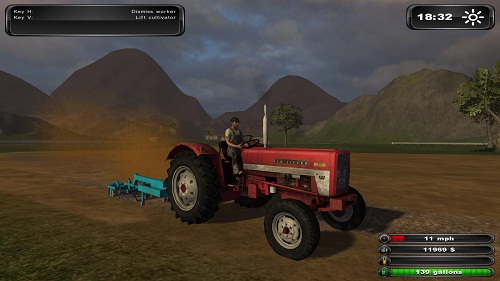 It may not be picking Call of Duty: Black Ops to the number 1 spot, but Farming simulator 2011 is possibly the most impressive and well-rounded simulation title out there, with fans all across the world this humble German farming simulator is definitely worth adding to your Christmas list, because it's everything a simulator fan would want.

Farming Simulator 2011 is very similar to its predecessor, the game is made up primarily of career mode which is a free-roaming open world farming environment, you also have missions that teach you the basics of the game, and now there is also the new multiplayer feature allowing you to farm online with other players as well as achievements for showing off your farming prowess.

The best feature that has been added into Farming Simulator 2011 is cows, as a farmer you can now buy cows, after feeding them grass or corn leftovers they will produce manure that can be used as fertilizer, and their milk is collected from your tanks everyday by the dairy. Unfortunately in terms of livestock only cows have been implemented, however they appear to be a great start to a new type of farming introduced to the series, and we can only hope that they add more varieties of livestock in the near future; the cows also don't look half bad either. 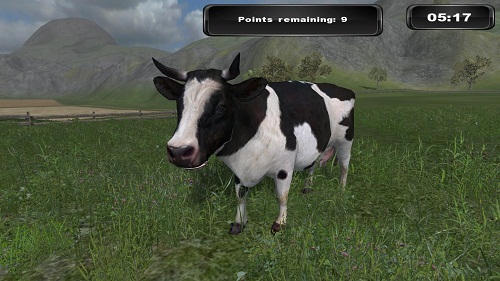 Aside from cows the most important feature added in Farming Simulator 2011 is online play, in online play you can either join existing games, or create your own, with a cap of up to 10 players. The idea is perfect and actually works really well allows you to literally run a farm with your mates in a semi-realistic looking world, with the ability to use voice or text chat as well as transfer money to the host allows you to run your farm with ease. 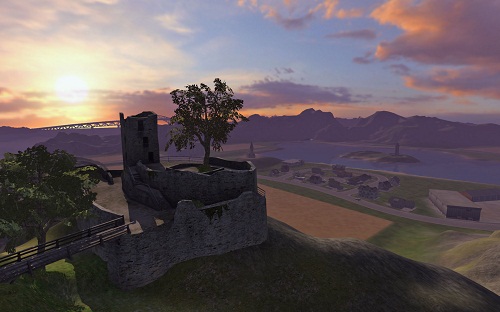 Giants have basically stuck to their original formula and improved on it ten-fold. From the introduction of new DEUTZ-FAHR, KRONE, HORSCH, PÃ–TTINGER, and VOGEL & NOOT equipment not to mention new farming abilities, you still rely on the sowing and harvest of corn, barley, wheat and canola as a primary income. The career mode functions in the exact same manner as the original, so whether you wish to simply grow crops with your humble equipment or make as much money as possible in order to upgrade your machinery to the highest standard your choices are limitless towards whatever you wish to follow in your farming life in the small non-descript village. Or maybe you just want to be a cow farmer, no matter what there is nothing blocking what you wish to achieve in this open world farming sim, that is the type of simulator you just cannot stop yourself going back to.

The best improvement on Farming Simulator 2011 is the new location that you reside in, not only does it have more places of interest, but everything feels much more alive. The rather soulless island of Farming Simulator Gold had cars on the roads but just felt far too empty, however the village and new coastline is buzzing, with boats and cars darting around you’ll even bump into villagers in the main village itself. Better yet, the bottle hunt returns as well, allowing you to scavenge around the island for bottles to recycle; the more bottles you recycle, the better your reputation the more money you get back from selling equipment.

Your most valuable item in Farming Simulator is not your Tractor, but your PDA, not only will your PDA inform you of the week’s weather, but it will keep you up-to-date with the prices of crop, the amount of resources you have in storage and your location on the world map.
Farming Simulator 2011 takes a straightforward style of the genre and does not mess around with keyboard configurations, in fact there are about 5 buttons you will need to use throughout the game making the experience far more user-friendly than some titles. Farming Simulator 2011 also supports the Xbox 360 controllers for use if you prefer not to use your keyboard. However like most simulator's your friend is the cruise control, which you will find yourself using on many occasions to ensure that you are not trying to plough your fields so fast that it is having no effect. The handy 'hire worker' also returns to ensure that if you've got some spare money you needn't worry about the dirty work involved in tending your land. 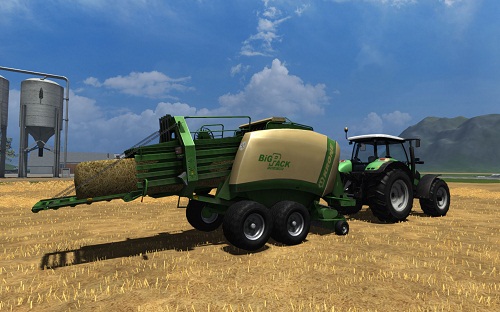 What is probably most impressive about Farming Simulator 2011 is that for a simulation title, the graphics are actually quite good, and all-round the title is well made, the only trouble with getting into the game is getting to know all of the different varieties of machinery in the game, especially when some take a lot of time to save up for. Without a doubt, many a mistake can be made through buying a very useful attachment for your tractor, but for the completely wrong reasons, nothing really explains the equipment to the fullest which for farming novices can be quite daunting.

If you played Farming Simulator 2009 then you’ll be completely in your element with 2011, the additions to the game are great improvements on what was an already fantastic game. Although unfortunately there is still no passing of time whilst you are out of the game, and the bumper car physics are still present which means that your vehicles will still be buzzing around the place, whilst the physics do appear to be greatly improved, they still need a little work, however nothing can detract away from the subtle addictiveness of the game.

Farming Simulator 2011 is a great improvement on an already impressive simulation title. If you enjoyed the last iteration in the series then you’ll love 2011, the addition of multiplayer and cows are a god-send and only boosts the playability of this fabulous simulator.

Farming Simulator 2011 is available now for Windows from all good stores for an SRP of £24.99.