Family Farm is a healthy alternative to the derogative Farmville, and a PC friendly solution to Harvest Moon, created by a small dev team in the Czech Republic, they have garnered together all of the interesting gameplay traits of farming and cleverly added in time management and simulation aspects. It is also available on Mac and Linux!

The difference between Family Farm and any other farming simulator is that the game surprisingly relies on your Family; tasks are performed in real-time and the skill of your family member determines how quickly they will fulfil certain tasks. Perhaps the mother of your family isn’t as good at hard work; then she’ll have a lot of trouble when it comes to ploughing a field, however she'll be fantastic at harvesting fruits. The game requires skill and your total awareness, you can't simply throw random people at a problem to make it go away. The true way to look at Family Farm is considering time management, and the distribution of the right people to the right jobs. 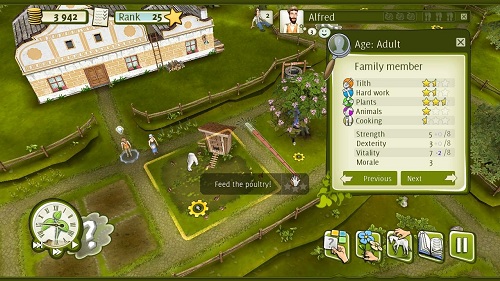 Family Farm does not work too indifferently to your standard farming affairs, however in case you do have issues at first, there are tutorials present to ease you into the many different aspects of the game. The first few missions to each set of chapters are really more of an introduction to the game, however it is important to note that you are not heading into a sandbox farming game, it is completely mission based. The guys at Hammerware have recently added in custom stories, which allow you to create your own scenarios for extra replay value, but expect your farming fun to be had in manageable chunks, with perhaps a couple of hours per mission, which steadily increases as you progress further.

The game's clock is run in seasons, whilst you won’t see any winter months present, Family Farm operates during the most interesting months on a farm; Spring and Harvest, each season lasts from 8am-6pm and runs fairly slowly, giving you plenty of time to plant your crops and till the soil, and improve your farm as you see fit. Both seasons make a whole year, and most missions run anywhere from 1-4 years.

Outside of the missions, the player will level up their profile as they succeed in their tasks, higher levels gain new crops, food to cook, and new types of livestock, each new component obtained will usually garner more energy, and more money, but will usually take more hard labour to bring them to their potential. 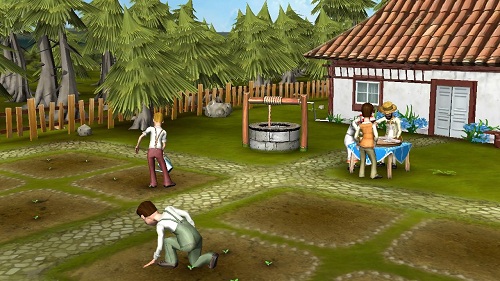 Now just because your workers are highly skilled farmers doesn't mean they can work non-stop during a season; each worker is governed by their level of morale, which factors their hunger, fatigue and strength. If you tell them to plough a huge field, you'll be lucky if they don't fall over in exhaustion, they'll probably need to take a break from all the hard work, which isn't too disastrous. However, forget to feed them every season and you'll have whiny uncooperative worker on your hands. Just make sure you've always got a family member available to cook one of the many dishes in the game, and you'll be fine.

In some aspects, Family Farm is very much orientated around team work, your farm workers will not manage to complete every task single-handed, in fact, teamwork is the key to a thriving farm, and some larger jobs will allow you to task up to four workers. Team-work is also greatly advantageous to your time management; four workers will harvest crop in the time it takes one man to harvest one quarter of a field. 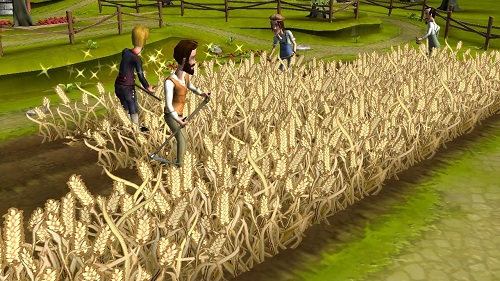 Throughout your farming life you will complete all variety of tasks including harvesting fruit, planting seeds, keeping animals, cutting trees, moving stones, fishing, upgrading the house, even cooking and making babies. Family farm is as much your standard farming simulator, but also deeply rooted in management, everything costs money, and it takes real strategy to keep your outgoings low enough to reap high profits from your Harvest.

Family Farm is without a doubt a very quaint game, rooted in 19th century farming you won't find any tractors or sprinklers here, everything is good-old-fashioned manual, keep your nose to the grindstone work, and it pays off; both the graphics and the music pay homage to a bygone era of farming, one that is far more romantic to gamers that aren't looking for riding the newest farming machinery.

The best aspect of Family Farm is that you can go about things the long and arduous way, and hire workers for your farm; workers are lazy, expensive, want fed, and a pretty unskilled. Or, the fantastic feature of Family Farm, which is to rely on your family. From the very start of the game you will only have two family members, however as your farm grows, so can your family.

Every year you can choose to have a baby; if your house is large enough. This will keep your lady of the house pre-occupied for a season, after that you will have a baby that will occasionally need fed, the season after they will become a child. Then a mere season after they are a child, they will be an able worker for your farm. So after 2 years, you will have a new worker for the farm. In the long run this is far better an investment than the lazy hired workers because your own family will only get better, and that little bit of effort that it takes, flourishes into far more working potential on your farm. 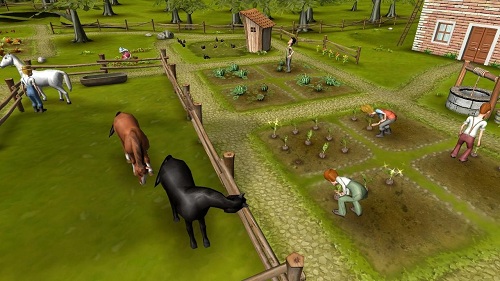 Family Farm is a fun and effective Farming Simulator that asks you to strategise your farming tactically in order to bring a season to its potential, rather than simply make you a Farming God. Hammerware have made an impressive game that is both addictive to farming sim fans and casual enough to be enjoyed by all.

Family Farm is available now from all good retailers for an SRP of £19.99 and is available on Windows, Mac and Linux, if you are interested you can download a demo from the Hammerware website, where you can also buy the game digitally for Linux and other formats.