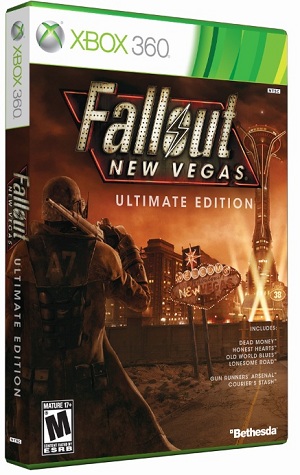 It was only a matter of time; all good games full to the brim with DLC eventually get a game of the year, special edition, ultimate edition, whatever you wish to call it. Finally Fallout: New Vegas can be purchased by all you avid fans that were waiting silently in anticipation so that you could own the full game, and all released DLC at once, and enjoy it in its full glory.

The additional content included in the Ultimate Edition expands beyond the Wastelands that seasoned explorers will have ventured to, and includes the Sierra Madre Casino, the Zion National Park, the Big MT research crater and the treacherous Divide all open for exploration-a-plenty. To keep your character going, the packs increase the maximum level cap to level 50 also.

The Fallout: New Vegas Ultimate Edition will be released February 10th in all good stores on Xbox 360, Playstation 3 and Windows PC, we waited with bated breath for the original Fallout 3 Game of the Year edition, and cannot wait to get our hands on some of the sweet dlc of Fallout New Vegas when it is released as a retail pack.