You wouldn't be alone if you asked "What's Faery Legends of Avalon?" I had no idea myself until I sat down to play this rough gem of a game. It comes from Spiders, a French company whose previous work only includes porting adventure titles such as Sherlock Holmes Vs Jack the Ripper and the long awaited Gray Matter, as well as their currently in development title Mars. Faery is their first in-house developed game with Focus Home Interactive picking it up for publishing.

So what's it about? Faery starts with a tale being told to the player, that magic once covered the entire earth where mystical beings (Faerys, Goblins and any other types of magical beasties you can imagine) and man lived together with no troubles. But as time went by man became scared and confused by magic, linking it to the occult among other things. Thanks to this they turned their back on magic and began to forget about it, which in turn does no good for our mystical chums, who start disappearing just like the magic in the world. Teamed with this story, Faery is an old school style RPG that puts a lot of focus on character development.

Before you start playing you are given the choice of choosing the gender of your character and other basic character creation elements like hair, skin tone etc. Your choice in gender changes the dialogue options within the game and the possible romances you can strike up as well.

The game is played from a third person perspective throughout the entire adventure and as expected from most popular RPGs the games’ battle system is turn based. If I had to compare it to a similar game system it would be Final Fantasy XIII. Legends of Avalon uses action bars instead of MP and your different skills and attacks will consume different amounts of your available actions. The big difference is that this is turn based rather than real time like FFXIII. It also contains a very simple elemental system as found in most games with magic where fire is weak against ice etc. 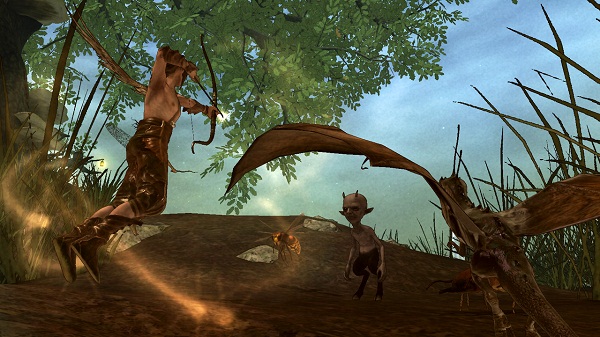 Faery starts off fairly challenging but as you level up the game slowly becomes easier and easier meaning battles don't really pose that much threat or challenge. You also have the opportunity to move your character's positions within the battle to offensive or defensive, but I never found the need to be as tactical as that, due to the low difficulty. The game also fully heals you after every battle like a few RPGs do nowadays which makes the items that you gain useless unless you find yourself getting badly hurt in a fight.

The armour and levelling system is very simple to get used to, with sets of armour to assign each body part with different status effects depending on the element of the set. Skills are handled through skill points which change your Faery’s body. These range from changing your wings to adding antenna, with each change bringing a new skill to use within battle. Overall the system is easy to use and not too complicated, which helps keep the game from being dragged down with menu upon menu. It's also nice bonus to see your Faery change thanks to the skills you choose.

Faery unfortunately starts to fall back on the same type of quests as you progress in the game, making you become an errand boy for the characters in the world with you jumping back and forth between them swapping items or solving their problems. A bit more variety would have been welcomed but the game is never really tedious, it saves itself from that fate by hitting the credits just before player fatigue sets in. Luckily the game allows you to accomplish quests through different means which spices things up; an example of this is using ants to clear out a termites nest instead of you clearing it out yourself, you’ll find yourself faced with multiple choices with most quests throughout the game. For an arcade title it’s a good length with my play through (with all side quests done) hitting the 6 hour mark. The game also encourages multiple play-throughs thanks to gender differences in the dialogue and the various choices you can make in the game.

Looking in greater depth on the characters; your group of magical misfits includes a Troll with a taste for poetry who talks only in verse, a baby dragon, a Jinn, as well as more that you’ll meet along the way. The cast is pretty varied and Burt, the Bookworm Troll, is probably one of the best. The one downside is that the other characters do fall into the same old fantasy stereotypes but they are charming none the less. The dialogue is also fairly tame and the use of old English is strung through the game here and there. The translation from French to English also holds up quite well with only a few spelling errors and a few cases of gender confusion throughout the script. 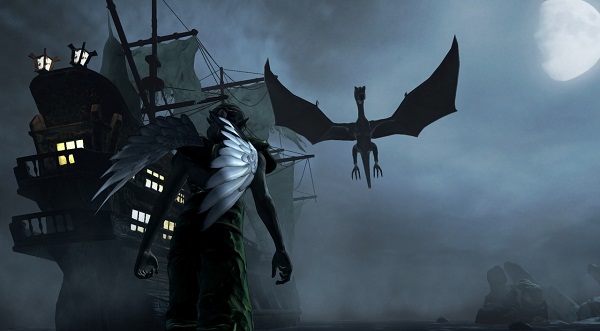 The game uses a conversation wheel system similar to Mass Effect, with positive or negative comments marked in blue or red respectively with these comments increasing or decreasing your standing with your party members. Overall the system feels let down as there are no huge game changing choices, as most choices seem to gain you sets of armour or have a romance character to declare their love for you...rather quickly, but maybe I'm just being old fashioned.

If there is one thing that Faery nails dead on, it's the visual style of the game. It’s a good looking game and while some things do look a bit rough on the edges there isn't anything wrong that isn't seen in a big budget game these days. The art direction is on the verge of excellence and Spiders really got the fantasy vibe down to a tee. Then there’s the sheer scale of the game, it really doesn't hit you until you leave the starting area but it really does feel like you are tiny creature in an immensely massive world; with animals such as birds and ants reinforcing this fact. Areas are also more varied than I first thought they would be, with adventures to a pirate ship and especially to a town riding on top of a gigantic Scarab, was something I wasn't really expecting in a game about Faeries.

The music is also one of its stand out features, fantastical melodies ring throughout every world you visit; the pirate ship location standing out in particular. It really feels like it could be used in a high budget fantasy movie rather than an arcade game. The only annoyance in the music is the battle theme, simply because you end up hearing it rather often and it is quite a repetitive piece of music that loops quite frequently. One disappointing note on the audio side of the game is that it contains no spoken dialogue at all which takes away quite a bit from the experience, a strong voice cast would have added so much more to the game.

Overall Faery is an enjoyable game with only a few things holding it back from greatness. The choices you make ultimately feel a bit pointless but the ending strongly hints at a continuation, which would be great as a sequel could fix all the issues that this title has. It's a nice little game and with its low difficulty I would highly recommend it for RPG beginners, fantasy fans or families who want to encourage their children to get into games. We give Faery: Legends of Avalon.

Faery: Legends of Avalon is rated 12+ on PEGI and is currently available on the Xbox Live Arcade for 1200 points, with a PS3 release to follow sometime in mid-December and a Windows release via Steam sometime next year.