This week Gamercast had the opportunity for a hands-on experience with the first Formula One title to hit the HD market. In short, we were very impressed, read on for the specifics of how Codemasters have succeeded in what looks to be the most impressive Formula One game of all time.

From what we've seen and heard, F1 2010 has the potential to be the best and most difficult Formula One game to date, and is set to include the full 13 team grid and all 26 drivers. Pit stops are included but without refuelling, there will however be an emphasis of getting the speed of the car down to an appropriate level when entering the pit lane, failure to do so will result in running into your mechanics; something that we haven't seen since '97 if I remember correctly.

With the sub title of “Be the Driver, Live the Life”, Codemasters have decided to give players a chance to get behind the scenes of the F1 world, this includes carrying out press conferences and interviews, which become more frequent as your reputation increases. 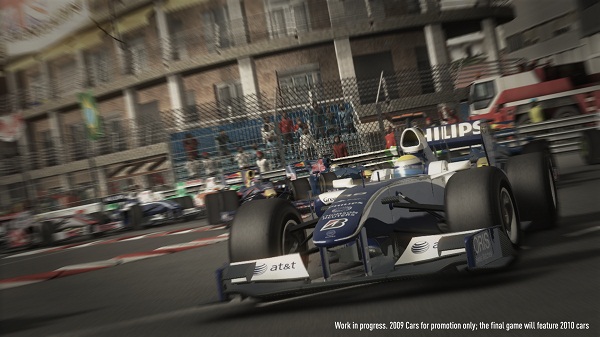 Another new addition is the “Drivers room”; where your agent sits, who informs you of teams interested in you, and how you are faring in the season; so basically she is the replacement for the cold emails and text messages you got in F106. Each room is themed around the team you drive for, we caught a glimpse of the Force India room; having the logo across the doors and the colour scheme on various objects, which adds a nice touch, and its the closest most of us will get to these trailers.

Codemasters have decided to bring Formula One to a more realistic level of play; there is a lot more emphasis of experiencing play through the driver rather than the car. For instance in previous games there was a speed difference between each team but no real difference between drivers, this year, all that should change with their new AI system. If a driver is known to be good at a certain circuit there will be a noticeable change in his performance at that track, all cars are also promised to be much more reactive to the players presence and will try to block passing manoeuvres. 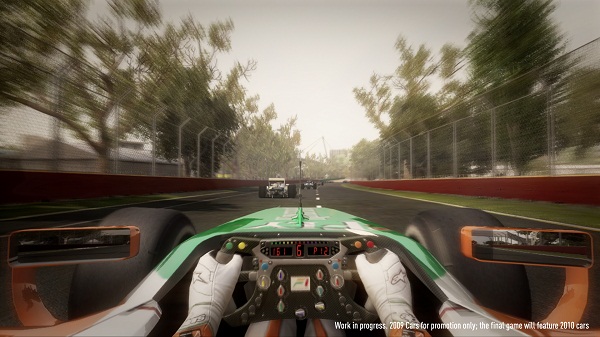 The new weather system is extremely dynamic; focusing on the condition on individual 30cm pieces of track instead of 'it’s this wet all the way around', this will allow for a constantly evolving track, which will also bring strategies such as cooling down your tyres in puddles of water if needed.

As well as the wet tyre there will of course be prime and option tyres for all races and these are promised to suffer realistic tyre degradation, first by getting blisters and marbles, then delaminating and finally failing altogether. There will also be the addition of having to look after your engine during a race, although, as you are limited through the FIA's 8 engine rule, you will be unable to run your engine on full tilt, therefore boosting your engine too much during the season will have a negative effect. The possibility of changing engine settings and wing setting from the steering wheel was also mentioned, although sounds slightly technical for most gamers to be worrying about.

Another feature will be that you can now take on car upgrades and carry out Research and Development, while this was only touched upon it was revealed that how you did in a season would affect the amount of upgrades available to you during the winter, what wasn’t explained was if this would be affecting your current team or roll over onto prospective teams if you are to move after a season. From the amount of new features Codemasters hope to add to the game which differ so greatly from any previous Formula One title, they seem to have taken over the license with fantastic enthusiasm, this is not your average F1 game, this is the future of Formula One games.

I was lucky enough to get a hands-on with a 3 lap race around Monza in Mark Webber’s Red Bull from 2009, unfortunately everything we saw featured only from the 2009 season, however 2010 drivers and cars will be featured in the final game. 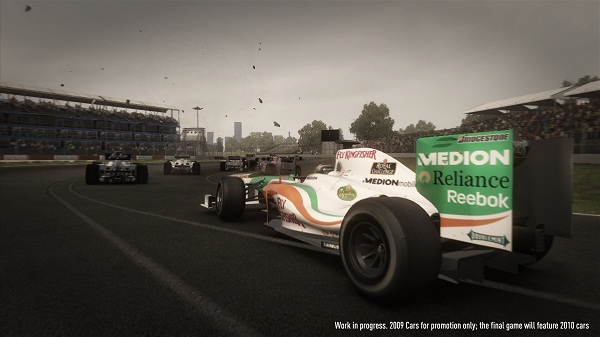 The first thing that was apparent, -apart from the fact that everyone was really bad at the game- was the damage; in previous incarnations damage would have your car lose the whole front wings, in F1 2010 if you lose a front wing and it gets hit there will be bits of carbon fibre flying everywhere, this debris will even hang around, however in some cases people were having collisions with very little visible damage however the game is still at an early stage.

For my final lap of the three I turned on a heavy downpour, this was brilliant, the spray looked extremely realistic and because the other drivers were unable to instantly change tyres -like I did- the AI were suddenly unable to stay on the road. At the moment the game is a bit too real, and I locked up the brakes into nearly every corner I went into, constantly pulling off 360 spins, I think I would of preferred it however if I had been given a joypad to play it with rather than a steering wheel and some pedals.

The graphics are polished, every detail in the cars and drivers are perfect, the weather effects are beautiful, and the game plays very realistically. The game that we got to experience was just the tip-of-the-iceberg, and it looks extremely promising for racing and Formula One fans, I cannot wait to get my hands on the finished product this September!

Gamercast's very own Tim had the luck of getting a hands-on play with F1 2010, at our Youtube channel you can also see the exclusive Dev Diary for the game.