Enslaved: Odyssey to the West is one of Namco’s most recent releases and developed by award nominees Ninja Theory, best know for their second title Heavenly Sword which was released back in 2009. Well now they’re back with Enslaved and this time it is multiplatform, and miles better than anything they've created before.

Enslaved follows the tale of Monkey and Trip an unlikely duo who seem to have been in the wrong place at the wrong time and happen to both be escaping from a Slaver ship that had taken the two captive. The game solely consists of the single player story, and starts by having you control Monkey on his escape from the aircraft he is held captive on, flowing into a more in depth story when waking up after the crash on what used to be known as New York. I would go into a little more detail but I don't wish to spoil the game for anyone, however you do traverse across a variety of locations each one more different than the next. 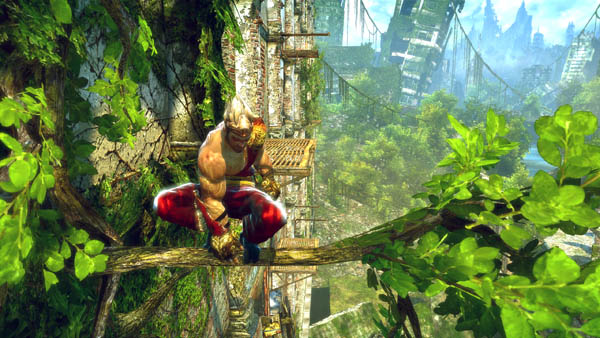 Enslaved is set in a post-apocalyptic setting, however it's not your everyday Mad Max; dust flying in the air wasteland, Ninja Theory have gone for the more visually appealing environment, a wasteland which has not been ravaged by radioactive material. Sadly the actual reason for the destructed cities is never fully explained; however it's a lot nicer seeing the beautiful greens and colourful plants as opposed to greyish brown everywhere. The setting seems to put Monkey in a place where he feels right at home, keeping a urbanised feel to it to match the fact that he's human but the added plants among the buildings give the feeling like your scaling a jungle at times.

The combat of Enslaved at the start feels quite unpolished; however this is only because of the upgrade system. As you collect tech orbs in the game you then have the ability to unlock skills as long as you have the required number, you can upgrade a multitude of areas which are Health, Staff, Shield and Combat. These upgrades really help add layers to the game, creating a vast array of ways to take out mechs. You can go through the game just doing quick and heavy attacks, but it feels quite bland without the added mix of evasive attacks, using the plasma blasts along with stunning enemies. The only thing it really lacks is combo moves to add more variety in staff attacks, however combos are nicer for variety but would then be a real pain trying to remember. 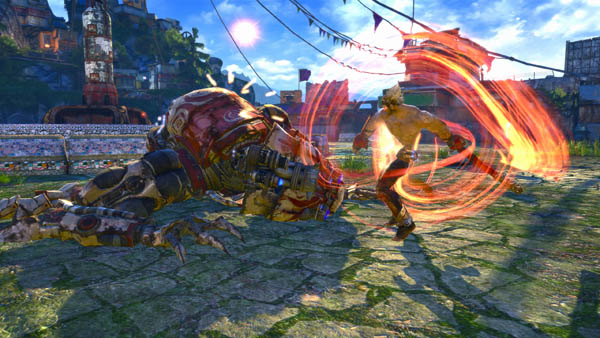 The other large chunk of the game, which may almost be larger than the combat is the climbing element to the game, I’ve always been a fan of scaling great heights in games, however Enslaved seems to do it better than any other game I’ve played to date, with Monkey’s beautiful animations teamed with a multitude of paths to take I found myself really enjoying swinging around like a monkey. In other games like Tomb Raider if the climbing parts of the game were as long as they are in Enslaved it would probably get slightly boring, but with the chance of seeing Monkey swing on a pole, jump up some stairs or grab onto a protruding piece of metal looks absolutely stunning swinging from item to item, as well as having a little timing involved which changes the animation dependant on when you press the button to jump to the next object. 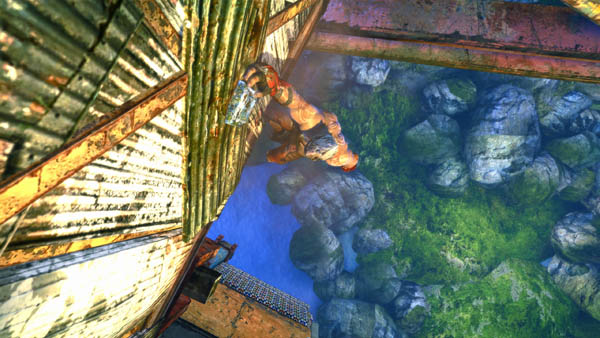 If you’re unsure on which version to buy and have both the Xbox 360 and Playstation 3 I recommend checking out the demos on both machines, of course this will be two hefty downloads but it can help you decide on your preferred platform, I favoured the frame rate on the Xbox 360, and of course the added achievements.

The score of the game is really something that wants you to pay attention to, if you really like the music there is a soundtrack available, however only in the Talent Pack version of the game; it’s also got the great credits music in there too as well as 17 other tracks from the game, which were composed by Nitin Sawhney, overall the pieces all fit the tension in the game and sit alongside the gameplay nicely.

Even with the compelling music, at first I wasn't really attached to the characters of Enslaved, finding Trip slightly annoying, and Monkey seeming like a ball of rage, however as the story progressed the characters seemed to get closer and worker well together. The characters of Enslaved really seem to be the high point of the game, and the dialogue teamed with the beautiful facial animations create a unique experience, that not many games at the moment can top, you will find yourself attached to the characters, so get ready for an emotional ride. Overall I really enjoyed Enslaved as an experience, a story and a game, it ticked all my boxes and left me wanting more. 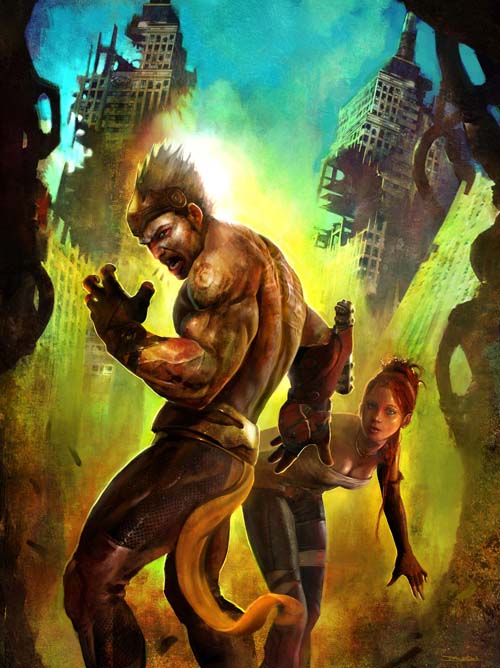 Enslaved is available on the Xbox 360 and Playstation 3 with an RRP of £39.99, there is also a European Collector’s Edition available, however this is only available in certain parts of Europe, so we recommend checking your local stores or websites (Not available in the UK or France). However you can pick up the Talent Pack from HMV stores for the exact same price as the standard version. And if you’re not convinced by our review you can always pick up the demo amd see what you think. And who knows if it does as well as it should do, maybe we can expect an Enslaved 2, as there’s definitely a lean towards one being possible.