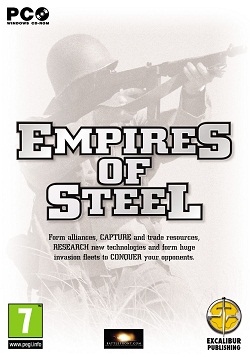 Empires of Steel is a small turn-based strategy title that throws away the book of complicatedness, diplomacy and madness, and focuses on combat, and war! With no frills attached, Empires of Steel is very similar to the recently reviewed Strategic Command, with a very big difference, if you think that Strategic Command is too confusing, pick up Empires of Steel, it is the game to wean the real-time strategy players over to the far supreme turn based strategy who don’t realise how engaging the genre it is.

The first noticeable point of Empires of Steel is it’s art style, it is very simple and 2D in a similar Advance Wars, cartoony vein, but with much less anime characters and ridiculous sub-plots. Not only that but it’s native resolution stands at 800x600, which results in a very nicely contained window to play the game in —of course you can make it full screen if you wish- making it the perfect game to minimise and bring up and play whilst you are ‘committed’ to finishing certain tasks such as work. The only fault that arises from the game’s simplicity is that it lacks somewhat in the audio department.

The game plays as your standard turn-based game, controlling a country you will need to scout for resources before setting up your base with infantry and artillery, before setting out to rule the land, air and sea. With a 100 year timeframe you will follow your units as they advance through the ages with research and development that welcomes the dawn of the nuclear age to your ranks, all set up with a straightforward turn system, Empires of Steel also has a particularly helpful user interface that displays which of your units are idle, not to mention how many turns they have been idle for, making it easy to keep tabs on your units as you expand your empire, something that many games in the genre do not bother with.

If the gameplay wasn’t simple enough for you, Empires of Steel comes with a very handy and straightforward tutorial, introducing you to the turn-based nature and semi-micromanagement that the game contains, and you can marvel at how uncomplicated and free the game feels. 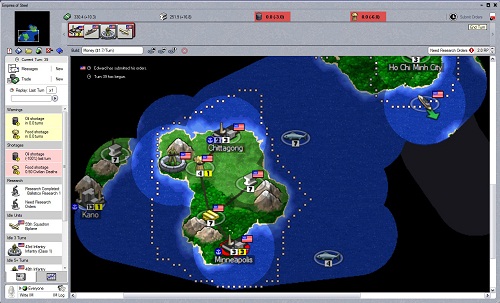 Unfortunately there is no actual campaign to the game, and rather than complicating you with missions and back-stories you can choose any given country and reign supreme against as many foes as you feel capable. This lends even more to the surprising pick-up-and-play nature of the game, focusing primarily on skirmishes rather than battles of epic proportions, with stories that you don't really care about.

The only real downside with Empires of Steel is that although the timeframe stretches over 100 years there is not much in the way of varied units, this probably arises from the straightforward nature of the game, however it does feel slightly unsatisfying to have advanced 100 years in the future, but not have much to show for.

If you get bored of the slightly easy AI characters, that tend to attack in dribbles rather than massive forces, there are several multiplayer options present to satisfy your need for global domination unfortunately there is a lack of hotseat multiplayer, however Empires of Steel does offer LAN and Online support, as well as the dependable Play-By-Email, making it the perfect game to play with your office co-workers while nobody is looking. 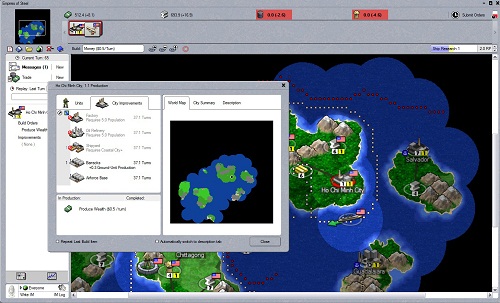 Also packaged with the game is a map editor, that is easier to pick up than Microsoft paint, never before has making a scenario felt so uncomplicated, and better yet, you can make quite capably aesthetically pleasing maps in a manner of minutes, and placement of cities, units and resources could not be more unproblematic.

Empires of Steel is undoubtedly the most user-friendly, turn-based strategy game ever to grace the palms of Gamercast, and makes meals of the more complicated and flashy turn-based games that see release. It may seem very basic to some gamers, however it is a simple and straightforward game that runs on current operating systems with little difficulty, it couldn't be sold any better for that purpose.

If you’re looking for something that you can pick up and play in a manner of minutes without having to sieve through hours of tutorials Empires of Steel is most definitely the game that you have been looking for.

Empires of Steel is available now exclusively for Windows from all good retailers for an SRP of £19.99.