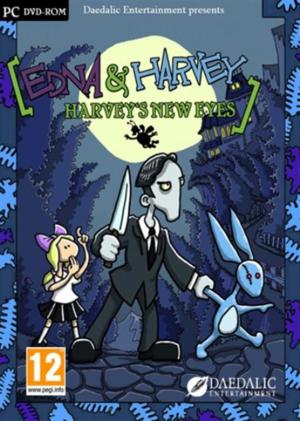 Edna and Harvey: The Breakout was a cult German adventure game that some of you may have missed, it had an edge with its simple art style, and most importantly its quirky story and characters, biggest of all being the irrational protagonist Edna who was a bit of a fan of chaos. In a similar fashion comes the spin-off; Edna and Harvey: Harvey’s New Eyes a delectable new tale that truly delves into the weird.

Set after the events of the original, Harvey’s New Eyes focuses on a small convent run by a strict Mother Superior to whom no one’s accomplishments are good enough, and when the children get too unruly for her liking she calls in the big guns, a certain Dr Marcel whose psychological exams are slightly unorthodox, little does he know that Edna is an inhabitant of the convent, however this time round our focus is on a different occupant; Lilli. 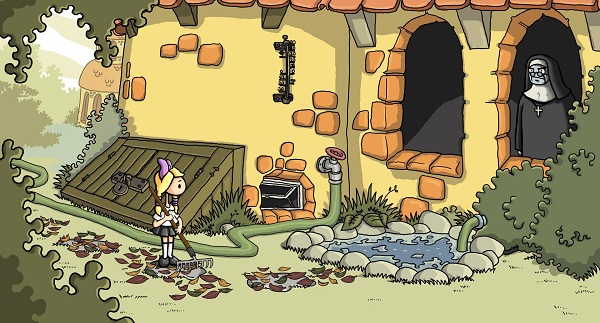 Shy schoolgirl Lilli could not be any more different from Edna, a sweet and innocent child at heart, she never manages to get a word in edgeways as long as there is someone else about, she lacks the radical spirit of Edna and prefers to do things by the book, it just so happens that trouble follows her around.

Now when we say trouble we don’t mean a detention here and there, or a plan gone awry, the inhabitants of the convent appear to be dropping off one-by-one in some particularly gruesome accidents, but all Lilli can see is these strange little gnomes painting pink goo over the misfortune of others, you always know when another kid is going to cark, and it’s satisfyingly dark how Lilli is so oblivious to it all, she’s like one of those small innocent children that just want to do things right, but just doesn't realise when something has gone too far.

As an almost silent protagonist, all comical timing and dialogue is carried out by our eccentric narrator who helps to build this ludicrously funny game into a very dark humorous tale, Harvey’s New Eyes may not be everyone’s cup of tea, but if you like your story’s a little twisted then you will absolutely love the spontaneous absurdities and wicked solutions to some of your puzzles in the first half of the game. It is without a doubt that the narrator makes the game what it is, and thankfully unlike its predecessor no jokes are lost in translation. 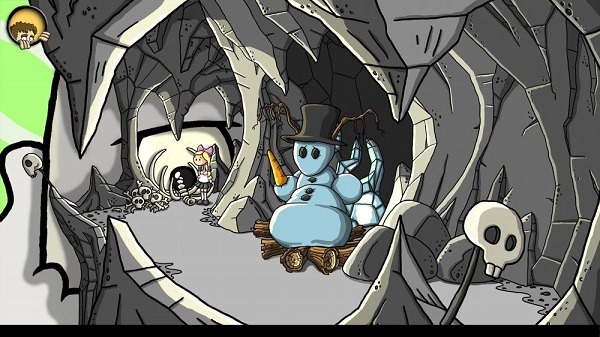 The game is kept fresh thanks to an innovative invention half way through the game, in Edna and Harvey: The Breakout Harvey posed as a gateway to flashbacks of Edna’s past, in Lilli's adventure Harvey is the cure for bad behavior, and Dr Marcel utilizes him to turn Lilli into a better behaved girl, —sounds a bit ridiculous right? She wouldn't hurt a fly!- the idea works fabulously, and her hypnosis places a series of rules and restrictions on her. Of course there will be points in the game where Lilli must use sharp objects or play with fire, so you must literally destroy the inner demons that are enforcing the rules on her, by convincing them that their restriction is illogical, clever right? Once a rule has been broken in the trance state Lilli will be able to break it in the real world, although only one at a time, adding a very inventive mechanic to your puzzling.

As a product of Daedalic Entertainment, there are a few cornerstones that we have come to recognise and indeed expect in all of their releases, most obvious of all is the art style of Harvey’s New Eyes; everything is hand drawn in its own unique way, there are puzzles that you will have to scratch your head over, the writing and dialogue is brilliantly well crafted, and most important of all; we are serenaded with a splendid song before we begin our adventure, alright so that isn't true to all of their games, but everyone loves a good old' song in a game!

Another staple of the modern Daedalic formula is the hotspot key which is used in Harvey’s New Eyes, for those that have never played one of the German developers titles, it takes the place of a hint system, and with a quick press of the space key you can observe all of those lovely click-able items on the screen, breaking the age old; Can I click here? No.. Can I click here? No.. Can I click here? Yes! Ever since Daedalic implemented it in their mesmerising The Whispered World it has been indispensable ever since, and helps egg you along to figure out that there is a gerbil in a jar that you can pick up, and you know that you could use a jar and a small animal! 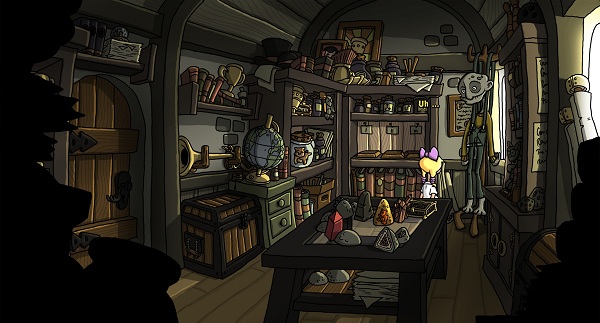 A brilliant evolution of Harvey’s New Eyes over The Breakout is that the game has certainly lost the overabundance of adventure game logic, in fact everything is fairly intuitive, this may be put down to the difference in mental state between the hyper cool inhabitant of earth that is Edna, and the smart Lilli whose marbles haven’t escaped just yet, or after a few online reviewers brought the subject up, so much so that they felt the need to bring it up! So we hope that they were thinking of Gamercast when they wrote the line about online reviewers stating the puzzles were too illogical!

As the sequel to Edna and Harvey: The Breakout, I do recommend that you go out and purchase the previous game for your perusal, however there aren't any real extensive elements in the game that require you to have played it, you may get a couple more jokes and regale at a few familiar faces, but if you are unable to source a copy, don’t feel that you are unable to play this brilliant game because of it, you've just no excuse though.

Edna and Harvey: Harvey’s New Eyes is a brilliantly humorous adventure game that your Steam catalogue should not be without, it you love your humour devilishly dark then you are going to enjoy the decent into anarchy that Lilli generates, we couldn't get enough of it.

Edna and Harvey: Harvey’s New Eyes is available now on Steam and other major distribution channels for the RRP of £15.99, and it’s worth every darn penny!