Along with the presentation for the newly announced Dead Rising 3 at the Microsoft Media Briefing, Capcom were also running through the game to show off a little more of the mechanics, while also showing that the game still has UI while playing. It was still fairly similar to what everyone saw on the big stage plus it ended in the same way but at least it calmed our nerves on them changing the franchise for the worst.

The combining of weapons to make special combo weapons has been brought across from Dead Rising 2 and works in a similar fashion to what you'll remember from DR2, Case West and Case Zero. Once again you'll be able to rake the environment for blueprints which if it's anything to go by the demo, they'll be found in hidden locations but fairly often. So whether that means the demo had lots temporarily to show variety, or there's a hell of a lot of new combos for you to hunt around and find.

The biggest and best difference however is that you no longer need to make your way to a workbench to make your cool new weapon, once you've got the components you can make it there and then. Of course you'll want to be wary of any nearby zombie threat, but it only seemed to take a few seconds to tape together all the weapons we saw meaning if you just give yourself a little space you should be safe. Also there's been an addition to the level up system and you'll now have an option to unlock combo items. What this means is that if you for example unlocked the blade category any blueprint you have containing any blade based items, which is depicted on each blueprint, will now allow you to use any type of blade to create the weapon, be it a butter knife, a machete or a katana. 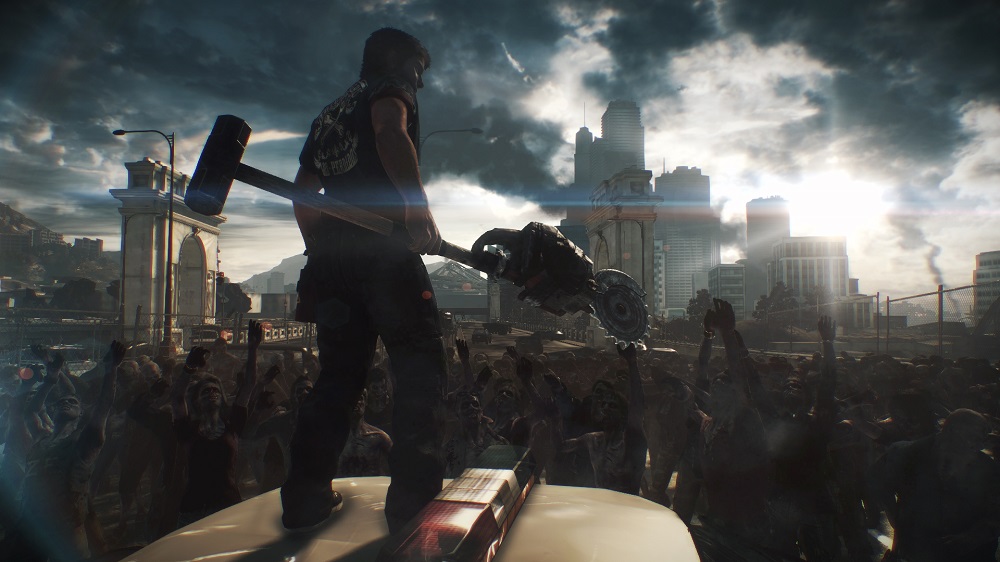 A promise made multiple times during the conference and once again in this playthrough is that you can pick up pretty much anything within the game, apparently giving you even more choice than the original, which honestly gave you a lot of variety. From the demo I was slightly disappointed that I saw an umbrella providing shade for a table in the Chinatown district and it didn't have a small UI icon to pick it up. With the umbrella being linked to an achievement in the original I'd like to hope that the same items can still be picked up and that it's just purely from being a demo. Their promises are high and I hope they can provide more items than you could ever imagine.

The zombies are of course the stars of the show and now they're officially smarter, they aren't going to start driving cars or picking up guns and start using them but what they do now do is work as a collective. If one zombies catches a glimpse of you they'll start making their way towards you, but it won't just be that singular zombie anymore, any nearby zombies will also be alerted also. However they won't choose you over other potential targets, it's generally that they'll notice anything that is moving or any loud noises and almost instantly become attracted. This can also work in a similar way in order to distract zombies, we had primarily an example of a flare drawing their attention away from you while you sneak off, but car alarms should work in a similar way as long as you aren't hanging around the car.

There are also themed zombies that you can come across which turned while they were performing their day job for example, to reflect this we were shown firemen zombies suited up in the gear and wielding axes. The axe didn't really seem to pose a threat but what does is their fireman uniform is a bit more protective than ripped clothes meaning you have to be a bit more careful around them as they'll take a few more hits to taken down. Plus don't forget with Kinect plugged in if there's any loud noise coming from your room when you're playing Dead Rising 3 you could alert nearby zombies, of course you could turn this feature off but it definitely pays to keep people quiet, or make you realise you should stop swearing at the zombies. 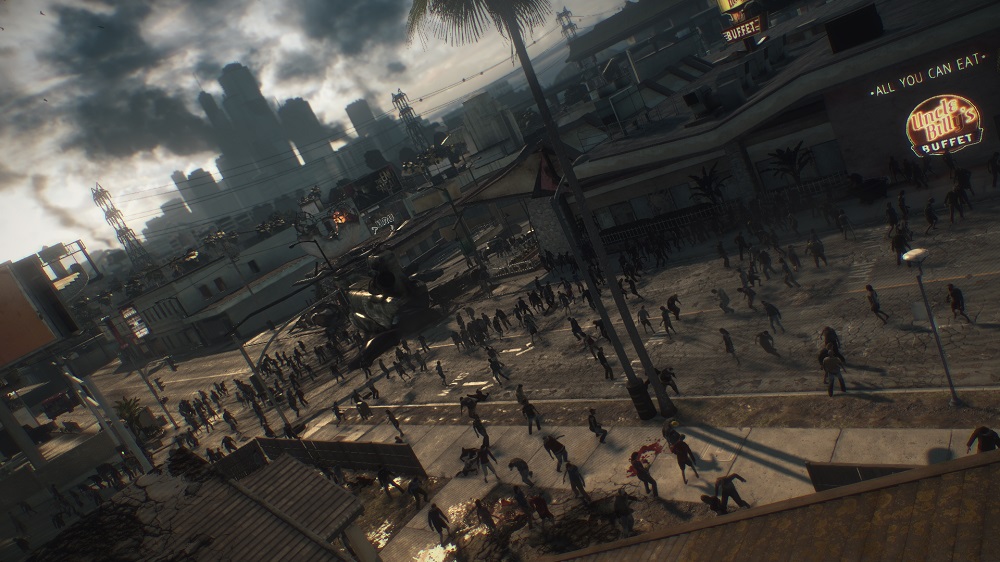 The zombie kill counter has always been a staple of Dead Rising and now it has more meaning other than potential achievement related reasons for it to be there. Now after killing a certain number of zombies defined by the developers you now get kill combos, where from a combination of buttons which appear under the kill counter Nick will perform a special move, it could be cutting a zombie in half, ripping of their arm or something else I can't even think of, maybe head-butting a zombie? They figured as you're enjoying killing zombies so much it would be nice for a bit of flourish here and there. They have been a little jarring in other games before but I think for a less serious and more kick the crap out of everything game like Dead Rising 3 it may feel more at home.

Visually you can straight away see the improvements that the new console is allowing the developers to utilise; however the first thing to strike you is that it has taken a turn for the brown. Now for some games in this day and age that may seem the norm, however Dead Rising has always been one of the brightest and most colourful zombie massacre games out there. It's not usually what you'd associate with zombies but in the past they've taken a cheap, cheerful and quirky approach which has worked well for a niche audience, but in order to bring in a wider range they did needed to tone it down a little. It's not all bad news though as the zombies have taken a turn for the best, meaning they appear much more detailed and varied than the previous current gen and the environments have been brought to life by including more props and variety of location. This does sadly seem to mean that the shopping mall is no more, however we've got our fingers crossed that they'll surprise us with a mall inside the city making the game potentially massive. 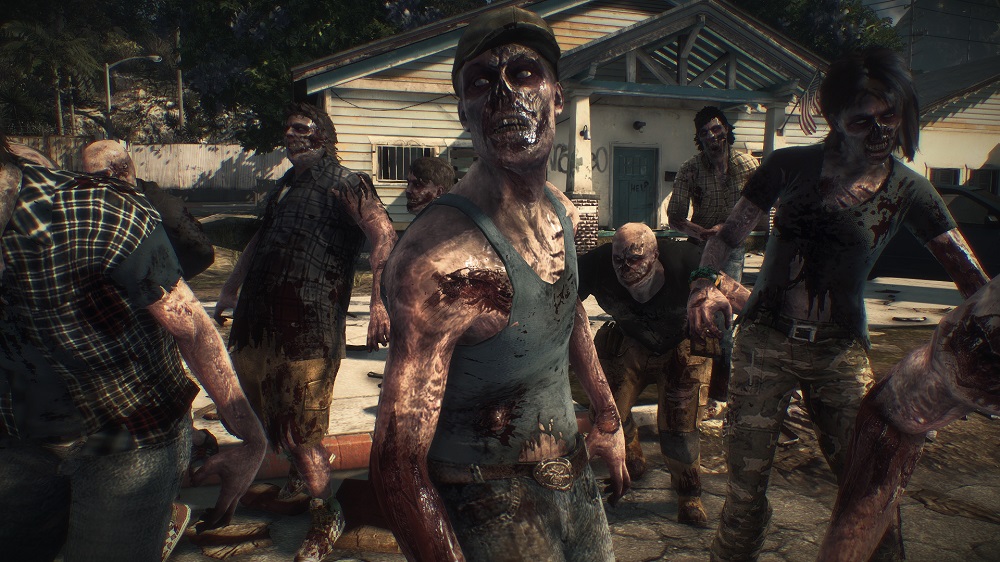 Whereas in the previous games you'd have a few select safe areas meaning you'd have to trek all the way back to them when wanting to have a break. In Dead Rising 3 there are now lots of safe zones scattered around Los Perdidos which are marked with graffiti on walls. This does potentially make it a less worrying game with constant safe zones, but they aren't always empty from the get-go. Sometimes you'll need to clear a safe zone of an infestation, meaning if you had just needed a break you'll have to wait a little longer. The safe zones have also been dumbed down to a certain degree but it all depends on how you look at it. On one hand it's amazing as the game remembers every weapon or object you've picked up and used against the zombie hoard. To save you hunting around for hours for a specific item for a combo, or just because you like it, if you go to a safe room you can open the weapons locker grab the item you want and leave. Or if you want to be hard on yourself you can ignore the locker and venture out while potentially being a victim of zombie induced death.

The lockers are definitely a nice addition in my eyes though especially when wanting to make some weapons or just stock up. Along with the weapons locker you even get a clothes closet that contains all the outfits and individual pieces of clothing that you've tried on. And rest assured from what we were shown that they're still trying to retain a certain comedic value about the game while also allowing players to have their options open. Available was a full size shark mascot costume and a very flattering summer dress, showing that they're once again giving you as much choice as you desire. The choices available were fairly tame and I only hope that there'll be as many different clothing stores as there were in the previous games as it's all about looking silly…or serious, one of the two.

With vehicles having only been briefly touched in the previous games they've tried their best to branch out on the variety that you can utilise with the new open world environment. Following on from the theme in Dead Rising 2 you can ride a variety of motorbikes, sports cars and even maintenance vehicles like a forklift truck which was of course the most exciting sounding for me. I only hope you can raise the forks and stab some zombies with it as it's not really the safest of vehicles, there's got to be a great reward for all that risk. Talking of risk being in any vehicle isn't without it, at any moment a zombie could fling itself onto your window attempting to get at you and eat some human flesh. Presumably the motorbike is also quite risky too, but you'd get a bigger speed boost too. 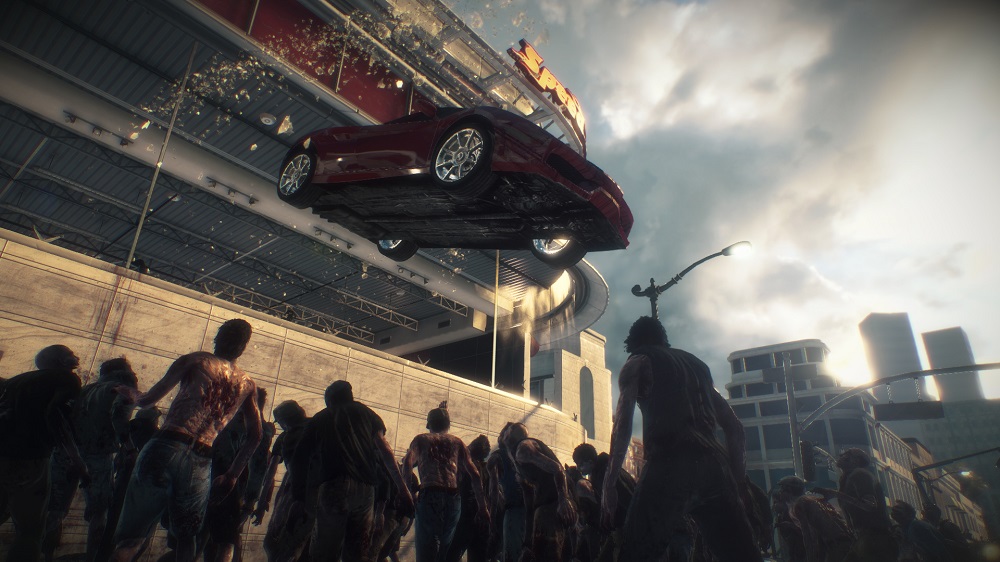 A new and exciting feature is their added SmartGlass functionality. The best addition from the support is that it acts in game similar to what you'd use a phone's GPS and internet for. You can look up nearby stores for if you want to find a gun or a garage, look through the list select one and it'll set a waypoint within the game. It can also from that point work as an in game map, giving you features that were a little lacking in the past. Also making it the ultimate companion as it doesn't mean you have to suffer and lose out on screen space for a map in a corner, or memorise a path when looking at a map screen. It also removes the problem of the physical maps in the past which were great, but a little too small for trying to plan out your strategy.

Now the other feature that SmartGlass has added is the ability to call in for support, at a guess this is supported by the story which is the reasons for it to gel in. The support ranges from a variety of weapon based attacks including drones and airstrikes. They seemed to be available from certain points in the game but even though calling an airstrike on hundreds of zombies is very cool it also removes the fear ever so slightly. Dead Rising has never truly been about fear but the feeling of isolation among the zombies can usually create a great atmosphere. It just feels like a drone taking out all the zombies is a little too easy. There was a cooldown on the features which wasn't set to very long, however with the game not finished yet things may be balanced accordingly.

Dead Rising 3 is currently set to release alongside the Xbox One's launch in Winter 2013 as is an exclusive to the console.