Kill Team is a two player, twin-stick shooter downloadable title that allows you to team up with your mate in co-op to fight for the Emperor and defend mankind. With six six iconic Space Marine chapters to play as including the Blood Ravens and White Scars, before you wipe out some Orks you will have to choose one of four classes available; Sternguard Veteran, Techmarines, Vanguard Veteran and the Librarian. 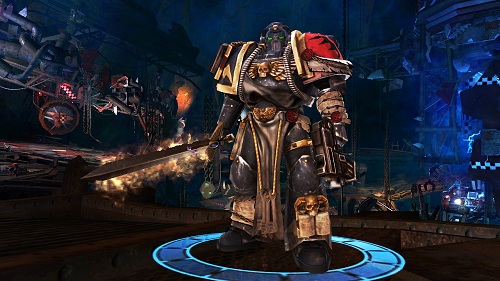 Kill Team is designed to be played by two players on the same screen and much like classic twin-stick shooters, missions will be full of power-ups and buffs. Power-ups range from healing, extra shots and shield power-ups, which are fairly self explanatory; and if both players stick together in close proximity they will both gain the effects of them.

Each class has a unique special ability that is filled by killing your enemies, the Vanguard Veteran is equipped with a jet pack allowing to power forwards and blast a burst of energy in an area of effect, on the other hand the Librarian on the other hand, uses a psychic attack that lifts enemies off their feet before throwing them back to allow for a few more seconds respite. To add your standard variety you will be able to modify your character’s skills and stats including hand-to-hand combat, shooting and health via XP gained in missions.

It's estimated that a play through will take roughly 4 hours per class and for those Warhammer 40k fans; if you complete the first mission of Kill Team you will unlock a special Chainsword for use in Space Marine. 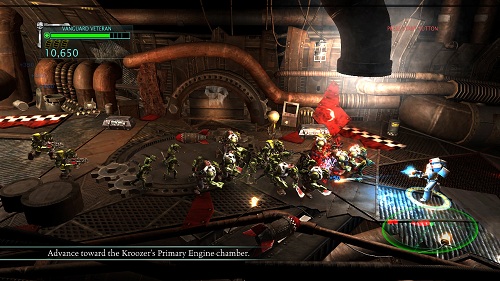 We stepped into the shoes of a Techmarine and a Librarian ripping Orks apart with Power Swords and Melta Gun with devastating effect at the Chem plant on an Ork Kroozer, tying-in loosely with the upcoming Space Marine.

With several different classes that grants different styles of play, and of the different chapters to allow for personalisation Kill Team is an interesting XBLA title, and with your standard, addictive twin-stick gameplay there is a lot for the arcade action fan. However, also the Chem plant in the demo was everything that a Warhammer 40k fan will love, down to the environments, weapons, enemies and fluff.

Kill Team is scheduled for a release in July on Xbox Live Arcade and Playstation Network for 800 MS Points and £9.99 respectively, and adds one more game to the short list of local multiplayer enabled games.