The cult of snowboarding used to see the release of well over 5 titles released every year, that is a thing of the past, however, next year Electronic Arts are testing the waters once more with a revisit to their popular franchise; SSX. We headed down to the booth at E3 and got to play through each of the three new play styles; Race it, Trick it and Survive it.

First we were shown a race down Mt Kilimanjaro racing through the smoke checkpoints against Mac and Elise. Helicopters drop all of the players in different positions and each mountain has many different paths down it which the AI will also use. 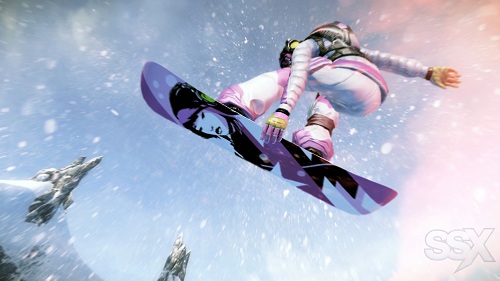 Helicopters are a constant figure in the game, lingering above you and providing help as you tear down mountains, in dark stages they will be your only source of light as they drops flares down the path and they are your only hope when trying those impossible jumps -they come lend a hand if they think you won’t make a jump, unless you have the flying squirrel suit.

Trick drops take the player lower down the mountains where the snow is soft and likely to provide you the layout that you need to bust out those big tricks. To give you the grind action that some SSX players crave the game will have some runs that include parts of the Great Wall of China so that you can get your grinding fix and we were guaranteed that if you can see it, you can ride on it, jump it or grind it.

The game has nine Survival events and in career mode these act as your boss stages; including unstable terrain, low oxygen and night runs. The mountains are tagged with areas that are stable and unstable, this allows the player to trigger avalanches that will then chase them down the mountain, if the avalanche goes over unstable terrain it will gather more snow and pace and if it goes over stable terrain it will slow down and possibly stop allowing for a pretty dynamic race for survival. 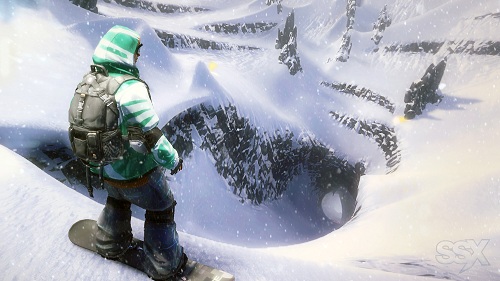 Players are given a 3d menu to choose the mountain range they wish to play, once selected this zooms in to choose the specific mountain (yes Everest will be an option), then you choose your drop point on that mountain.

What is most impressive about SSX, is that EA are using a bespoke piece of software to generate mountains from topography data gathered from NASA, and the software takes a mere 28 seconds to generate a accurate mountain range. Despite still being relatively young the game looked fantastic and currently plays with both the face buttons and analogue stick control, both methods felt comfortable and were useable in the preview.

I really enjoyed getting my hands on this game, it looks fantastic and reminds me so much of the first games which I fondly remember playing to death. The tricks were just as crazy as always and you get more points the closer to the ground you are when you finish a trick, bringing back my old problem of not knowing when to finish a trick.

Hardcore fans, and newcomers to the series are going to enjoy this as much as I did. The cool factor of snowboarding died down too many years ago, and snowboarding video games are no longer in abundance, hopefully SSX will shine a light on a defunct genre it hits the shelves January 2012.