Whilst at E3 we had a good hands-on play with THQ’s new Warhammer 40K title Space Marine. For those unfamiliar with the title; Space Marine is a 3rd person shooter based around the character Captain Titus of the Ultramarines, a chapter of the Space Marine army, of the hugely popular Warhammer 40K universe.

Ultramarines have always been about purging the xenos, and this is just as much the case in our demo of Space Marine as you attempt to stop the Orks take control of the arm of a Titan, which they intend on using to take over a Forgeworld.

As Titus and his squad of men we stormed an Imperial Manufactorum being attacked by Orks; ranging from small Gretchin and Grots, to your standard Ork Boyz, and Nobz, right up to Warboss’s, the renditions of the units are fantastic, and Space Marine truly allows the Marine-player to live out their greatest battles with visceral attacks, making them just as fantastic as you always imagined them in your head. 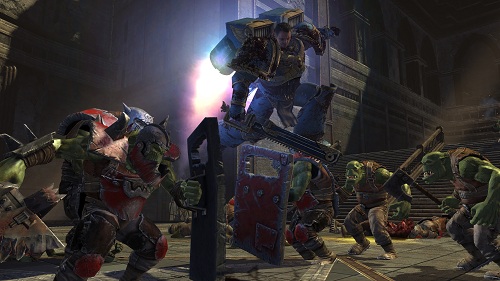 When it comes to Space Marine's combat it takes an over the top approach, with blood and gibs going everywhere. Players will have access to an arsenal of your standard Space Marine weaponry including the Bolt pistol, Bolt Gun, Plasma Gun and Grenade Launcher.

You don’t need to know the lore to understand the weapons at your fingertips; the Bolt Pistol is your standard pistol, the Bolt Gun; sort of like a shotgun. The Plasma Gun is far faster and damaging to your enemies, but will overheat with a few shots, the most effective weapon in the demo was unsurprisingly the Grenade launcher will allows players take down large amounts of enemies with a single blast.

The other guns are better at closing the distance between yourself and enemies, where combat can switch seamlessly between ranged and hand-to-hand-combat with the use of the all-powerful Chainsword, think gratifyingly visceral like the Gears of War Lancer. Chainsword’s don’t make your marine invincible however, get too close to the bigger enemies and they’ll slam you face first into the floor.

The Chainsword does have its perks; for a little more power behind your attacks, you are able to carry out executions on smaller enemies such as Gretchin and Ork Boyz with the Chainsword, allowing for a quick and effective, if bloody, takedown. 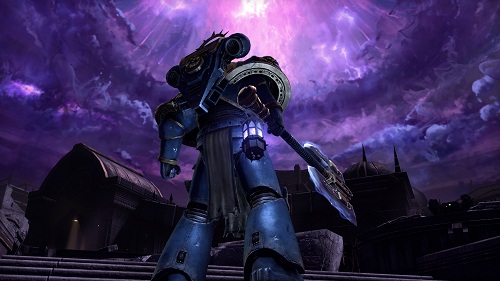 The environments are akin to your standard vision of the future; crates and ammo caches are strewn throughout the level with your standard industrial colours, browns and greens, and then you are hit with the bright reds and yellows of the Ork encampments. Much like the recent Kill Team game, the player is led through the levels fairly linearly, however there are small perks for those looking for a little more, including journals for the eagle-eyed player to pick up, collect and most importantly for those 40k fans; read.

If you are a fan of Warhammer 40K then you are going to absolutely love Space Marine, contrary to most Warhammer titles, if you do not like the franchise, then you will undoubtedly still enjoy Space Marine as a stand-alone 3rd person shooter, it's visceral chainsword may be reminiscent of Gears of War, but we're in a whole other universe here.

Space Marine should be hitting shelves September 9th 2011, we've waited years for a really good Warhammer 40K 3rd person title, I do think that our prayers to the Emperor have just been answered.