Lucius is a brand new adventure game that is slated for release at the end of this year; we originally wrote a news post announcing the game intrigued by its unique storyline and gameplay elements. We had the chance to see a presentation of it from Lace Mamba Global at this year’s E3, and boy does it look good.

We were seeing an early beta build of the game that was missing out on a little bit of polish here and there, but the core of the game was absolutely fantastic. To set the scene; Lucius is the unfortunate grandson of a corrupt politician who in spite of more power sold his first grandson’s soul to the devil for more political power. Well Lucius’ 6th birthday has come around, and your grandfather wants his deal broke, in order to do so however, there is a little task you will have to fulfil beforehand; you need to wipe out every inhabitant of the Mansion that you reside in, in order for the devil to make his presence. 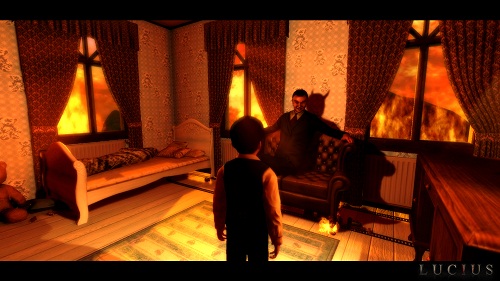 So it sounds like a pretty interesting concept right? As a six-year-old boy it is your task to wipe out the residents of a mansion. Well don’t go thinking that this is an action title, it is a true adventure game, driven by story, and completely linear; you can’t just go around stabbing people to get rid of them.

Everything in the game can be picked up by Lucius, however you might imagine that playing as a six-year-old has a lot of limitations, especially in an adventure game; you can’t drive to new locations, you can’t get up to that shelf with the all-important clue to the puzzle, and you can’t overpower an adult with your puny little-boy-arms.

So how does Lucius go about killing his targets? When a new person is lined up on your ‘killing order’ you will have the character indicated to you by both a visual and audible sign. It’s important to note that each murder can be seen as a puzzle, rather than getting a generator working, you are simply eliminating another individual from your list.

We were treated to the first killing that takes place in the game; whilst walking through the Mansion’s kitchen you are shown that one of the Maids are your first target. You lie in wait like the devious little boy that you are, and watch as she walks into a huge freezer; spotting a padlock on a nearby table, you rush up to the door, lock in shut and watch as she dies a frosty agonising death. The best way to consider the way to solve the puzzles is in the same way that Hitman: Blood Money was almost a puzzle solving game; in the how-do-I-make-this-look-like-an-accident sort of way, and works extremely effectively in this way. However rather than have to go out guns blazing when you are caught in the act, you will simply have to restart your progress. 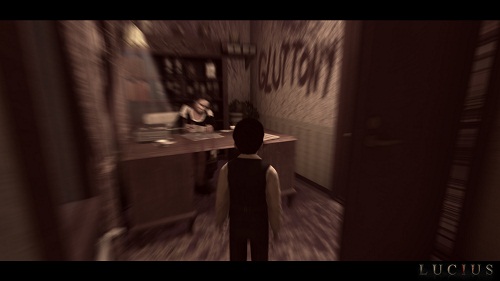 Lucius is not your ordinary six-year-old boy, and before long he learns of his psychic powers in some early murders, including Telekinesis; perfect for getting to all those hard-to-reach locations, and manipulate objects, such as breaking lightbulbs.

Another power at your disposal is mind control; which you can use on the weak-minded, so we were shown another puzzle that involved you showing another maid that the man she is having an affair with, is having an affair with another woman. In convincing her this you can persuade her to jump off a balcony, but don’t forget to frame her for a couple of your earlier exploits whilst you are at it, after all, the detective sent to the mansion will know no better!

Just in case you feel that the game is far too dark, don’t be tricked by your victims' innocent exterior, you’ll find as you weave your way around the mansion, that every character has a dark side that you will undoubtedly discover as you skulk in the darkness so that you are never seen, and pinned to the ‘accidents’. 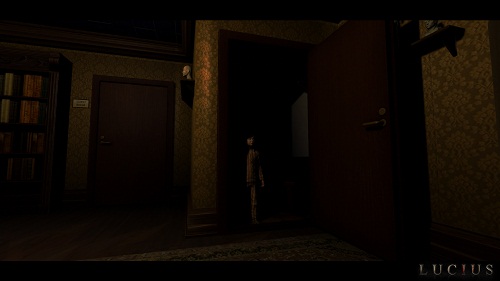 The mansion is one of the biggest characters of the game, and comprised of two floors, two wings and a courtyard there is a lot of rooms to explore, and you’ll come to learn the secrets of the mansion via Lucius’ journal, and secret maps hidden in the inhabitants’ rooms.
The game looks really impressive, and watching little Lucius traverse the hallways looks fantastic, and really good for similar 3D adventure games.

Lucius looks like a really promising title, and its casual ‘accident’ puzzles seem to be everything we were hoping for when we announced the game back in August last year, and we can’t wait to get our hands on the game when it is released at the end of 2011.