In a comfy little zombie-infested booth we were shown the Xbox 360 version of Jurassic Park, the first 3D game to fully pull apart from the standard cartoony Telltale mold, so its time to get serious as we step into the dangerous overgrowth of Jurassic Park.

Jurassic Park will be possibly the most dramatic, most cinematic game ever made at Telltale, and focuses first and foremost on narrative and story and will be divided into two different styles of gameplay; slow paced detective segments, much like your everyday adventure game, and action sequences; which we'll come to a little later. 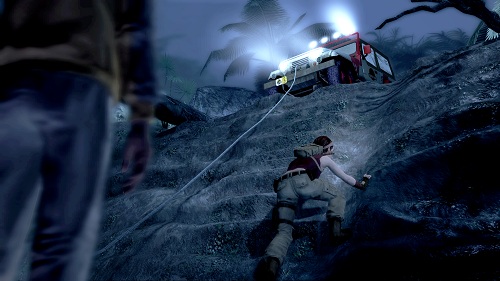 Jurassic Park is based around the first -and best- movie, and from the very start focuses on one particular MacGuffin that was never explained; Nedry's failed delivery of the frozen dinosaur embryos. The two characters that we are introduced to are Nima and Miles who are waiting expectantly for Dennis Nedry's delivery of the Dinosaur embryos, showing that the series will touch on both familiar, and new locations and characters.

Whilst you will not be playing as the series' Dr Alan Grant, Nima is standing in as our protagonist and catalyst for the uninformed player; those of you that have not seen Jurassic Park, or perhaps the last time you saw it was indeed 18 years ago. Nima fills us in on the story as she finds out about the park, Nedry, and the goings on for the first time. Now, all you raging Jurassic Park fans will be thinking that you will obviously be playing a few steps ahead of your protagonist, you'd be wrong.

Telltale Games are not one to directly adapt a television series, book or film into a video game, they have always liked to inject a bit of their own stylings, and give the game their personal touch, Jurassic Park will be true to the film; full of scares, tense moments, and most importantly, dinosaurs. To keep you on your toes, Telltale have introduced a new dinosaur to the park, one that even Dr Harding is unaware of, so don't go swanning off thinking you own the place!

To keep the game as action focused as possible, Telltale have introduced quick-time-events into the game, requiring your upmost attention; lest you be killed by a particularly viscous dinosaur; in this case, Dilophosaurus. If you hit your mark, you'll remain safe in Jurassic Park, however if you do find some sections particularly tricky, the game will ease up on you; because there are a LOT of interesting and humorous ways to die in this game. 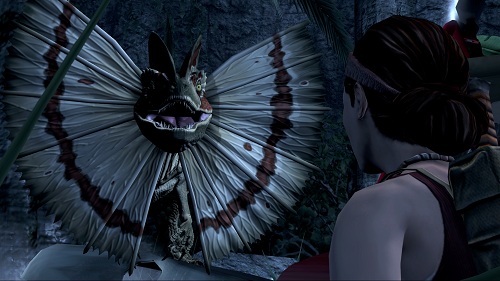 A rather new feature to Jurassic Park that may be of interest to adventure gamers is picture-in-picture display, which ensures that the player will never miss an area of interest whilst exploring locations; it happens to the best of us at times! (see my review of Hector) Picture-in-picture allows you to hop from location to location; almost like a fast travel mechanic, it may signal the laziness of gamers, however it also prevents you from ever missing an area of interest.

One very minor change in Jurassic Park to the standard Telltale engine games is that dilogue is now chosen via a pie menu, similar to Mass Effect, and your protagonist Nima can think things over herself to give you clues to what you need to be looking for, probably more so because she is alone, but this is an interesting addition to the series.

Telltale are very careful at making it clear that the conflict of the game lies on that of the dinosaurs and the people against each, however they are also very aware that the dinosaurs are animals and not monsters. For this very reason, they have lovingly crafted this 5 episode series to ensure that fans of the series and newcomers to the brand will enjoy it as much as the films, books, and so much more than the previous attempts at Jurassic Park games.

Jurassic Park is yet another new and exciting IP that Telltale have got to work with. Their mix of fast paced QTE and adventure gaming is very reminiscent of Heavy Rain, and for that very reason it will likely receive many comparisons to the hit game of 2010, however for now the game looks fantastic, the dinosaurs are amazing, and it looks to further extend the Telltale family in the best way possible.

Jurassic Park is an episodic series that will run for five episodes on Xbox Live Arcade, Playstation Network, PC and Mac beginning Fall 2011.