Since the end of The Darkness, time has been well for Jackie, he is the head of the Franchetti family, he's managed to put all of his troubles with Paul, Jenny and most importantly The Darkness behind him. However, life isn't happily ever-after for Jackie, after an almost successful hit on his life; The Darkness is reborn within him, and before he knows it, everyone is out to get him, and he's begun seeing Jenny once more.

We are introduced to the Brotherhood, a rather nasty lot that are set on taking the Darkness' powers from Jackie for the greater bad, these guys mean business, and they know all of your tricks and Darkness powers, and they'll use them to your advantage. 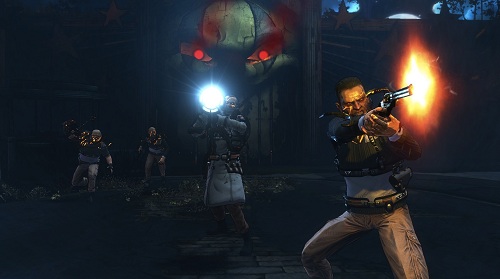 You might notice a little bit of the Darkness running through their veins; these guys are jacked-up and far more powerful than your standard goons, they'll bring searchlights, torches anything to stop you from using your most powerful of attacks on them.

We track Victor Valenti -the man who put the hit on you- to a Carnival to begin our demo, and from the very beginning, the change in art direction is very obvious. All textures are hand-painted, capturing the brightness and vibrancy of the comics with a strong contrast of dark and light, and are quite different to the quake-ish bump maps of The Darkness. It is also clear that the use of your environment is still key to successful gameplay; shooting out lights and whipping them with the Darkness' tendrils is still a necessity and it allows you to roam around locations under the cover of darkness.

In terms of gameplay changes, players will now be able to 'quad-wield' utilising both the Darkness' writhing tentacles and Jackie's firearms for devastating effect. The Darkness is now a far more powerful force and allows for more varied executions; like popping heads, and ripping your foes in half. Alongside the added strength, you now also have the ability to use environmental objects as shields and use The Darkness the way it was originally intended; for the most brutal and effective multi-tasking possible, one that the true gamer can pick-up, get the grips of, and play in the most stylish way imaginable. 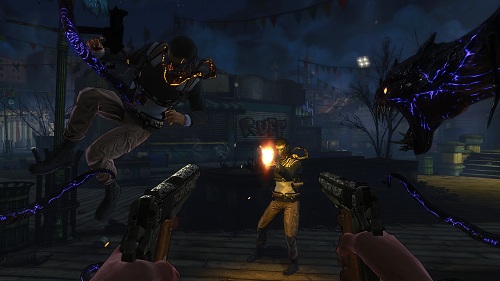 Rather than spawning Darkling's in The Darkness II, you will have a primary Darkling that will constantly aid you; this little guy will stick around unlike in the original game, and is more involved in the storyline. Hopefully his scratchy little voice, wont grate on you too much.

An addition to The Darkness II is the new Progression system that works on the currency of essence; which brings new purpose to devouring your enemies' hearts. The Progression system allows you to upgrade your weapons, mystical powers, gun channelling and darkness powers, this allows for a variety of play styles whether you prefer your guns, or the Darkness, you've the freedom of choice.

Gun Channelling is a new ability that allows you to channel the Darkness' powers through your weapons as live ammo; allowing for unlimited ammo for a short amount of time, as well as the ability to shoot through walls, and pick up enemies as heat signatures, your standard gun channelling is not this powerful of course, you'll need a few upgrades to make it a powerful tool at your disposal.

Fans of the comics need not fear, Paul Jenkins is at the helm of The Darkness II, and the game promises to be just as story driven as its forerunner, whilst the demo did not really hint to any storylines present, we did get a snippet of what is to come, and it looks to be dripping with gore and style. 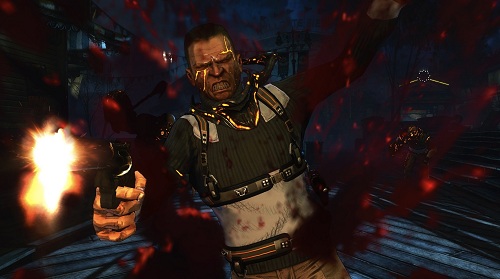 Those of you looking for another rock-hard game, Digital Extremes are probably not as hardcore as Starbreeze with their overwhelming difficulty levels, however The Darkness II does require a bit of finesse from you, you'll find yourself in hot water if you do not master the controls of the Darkness and his special powers, so don't expect an easy ride!

You'll be pleased to know that Mike Patton is back voicing The Darkness for all those screeching cries in the dark, and after being mentally locked up inside Jackie for two years he's none too happy, so expect a brilliantly snapping, biting, all-out antagonistic force through your ally. Kirk Acevedo does not appear to be back voicing Jackie Estacado, however 2K have not yet announced who they will be replacing him with.

The Darkness II has unfortunately been put back for a release on February 10th 2012 for Xbox 360, Playstation 3 and Windows PC; fans of the original, and the comics need not fear, this sequel looks just as tight as it's predecessor. Here's hoping the insane amount of random collectables, side-missions and television screens will be making an appearance once more; they were one of the best bits!