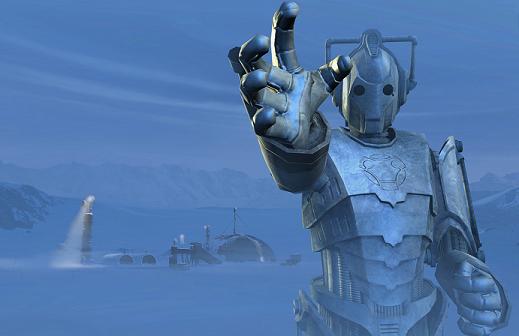 The BBC have proudly announced that a total of 524,299 downloads were requested of the first episode of Doctor Who: The Adventure Games in its first 12 days, in addition to this, the website has reported an increase of over 67% unique UK visitors in the full week that the game was available.

Executive Producer Steven Moffat believes the games’ success is down to the on-screen chemistry between Matt Smith and Karen Gillan, and feel that this has been suitably captured in the games;

Matt Smith has conquered space, now he's conquering cyberspace. The way the games capture the look and feel of the TV series is amazing. Matt Smith walks like a drunken giraffe on-screen and also in-game - it's a virtuoso virtual performance, and one I'm delighted is proving to be so popular. Just worried I won't get any writing done, what with playing the game all the time.

Karen is a staggering companion - literally, have you seen her when the TARDIS shakes? - and her personality is perfectly captured in these episodes. There are some genuinely funny lines between the two, so we've really brought the TV series into the control of families up and down the country. Half a million download requests in 12 days - amazing.

Episode 2 will be unveiled next week in Scotland at a special BBC learning event where Steven Moffat and others involved in the production of the Adventure Games will showcase the newest episode to around 150 kids on Tuesday 22nd June, a second event in the afternoon of the same day, will offer the public a presentation by the legendary Charles Cecil, writer; Phil Ford, and dalek voicee; Nicholas Briggs which can be viewed live here from 2pm on Tuesday.

For the first proper iteration of the popular Doctor Who television series for gamers, it is no surprise that the adventure games have done so well, and it will be interesting to know how many of the half a million viewers that downloaded the adventure game will be returning for the second adventure as the Doctor and Amy materialise in the Artic where members of a survey team are digging something sinister from the ice that has been laying in wait for thousands of the years; an army of Cybermen!

If you didn’t see our review of the first episode you can check it out here, and expect to see our impressions on the second episode soon after it’s release.