In the fun-filled theme park of Dungeonland only the brave may enter, if you think you're up to the task, prepare to enter the Dungeon Maestro's domain as a lowly Warrior, Rogue and Mage! Each must work together cooperatively in order to survive their inevitable death, the odds are not stacked in their favour and to make their way through the Dungeon Maestro’s kingdom before they lose all their lives is a true feat in itself, the question is, are you ready to die?

In Dungeonland there are currently four different domains open for business; Cannibal Kingdom, Arcane Kingdom, DM Tower and the DM Mode -but we'll get to that one in a bit-, plus with new attractions coming soon the wonderful resort, Dungeonland has plenty to keep you occupied. Each domain consists of two stages and a boss, sounds easy enough right? Well this isn't a tale where the good guys always win, and the Dungeon Maestro of Dungeonland is an unforgiving man, prepare for the fight of your life! 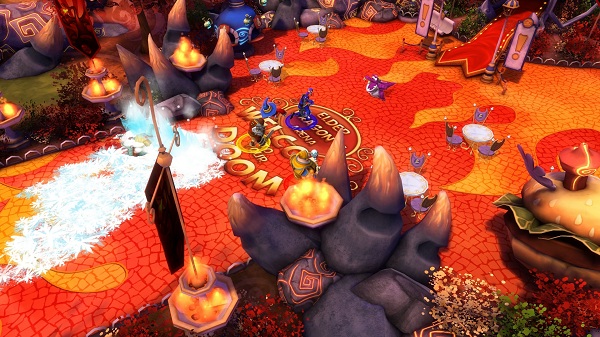 We really aren't kidding when we say the game is hard, just to emphasis the fact, if you wish to play as a cowering adventurer your first difficulty is hard mode! Don’t worry, if you’re one tough cookie, there’s the additional Harder and Impossible modes, better than those too? Well then you might be interested in Challenges that make your task even harder by setting up new rules for the battlefield such as no health drops, bad things happen when you kill sheep, or spawners having ridiculous health.

Adventurers are controlled in a very simple hack’n’slash style, each character has their class specific special attack such as the vanguard’s area-of-effect stun or the assassin’s line of throwing knives, each character also has the use of potions that react in different ways, allowing you to taunt enemies, throw bombs or gain bursts of speeds. The variation is key, because standard combat is achieved with ‘hold-to-attack’, so special attacks, jumping around evasively like a madman and using potions are the only real way to defending against large crowds of enemies, oh apart from the one true requirement of the game; work like a team!

It’s safe to say that Dungeonland is a tough game, but it really does come down to your skill and ability to cooperate with your fellow adventurers, the enemies are never that difficult, and it is only the base instinct to attack what is attacking you -rather than the randomly placed spawners that conjure all manner of monsters- that will leave many dead. If players do not focus on the position and health of their teammates they will not be able to revive them in time, striking a vital life out of their allowance. But most of all, in similar games the trouble with cooperative play alongside strangers is the fight for loot! However Critical Studio have tackled this by making all drops shared, so no need to prioritise picking up those coins to fill your personal coffer, now just to get that through the thick-skulls of your mates. 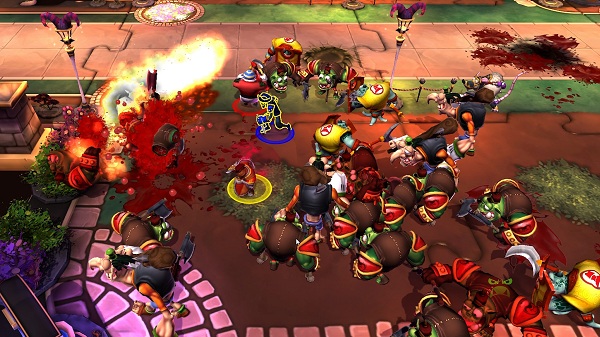 Not everyone is cut out to be an adventurer, and hack’n’slashing is not everyone’s cup of tea which is where the glorious Dungeon Maestro comes in! As a Dungeon Maestro you control Dungeonland, spawning new monsters, laying traps and most importantly, laughing maniacally! After five minutes as a Dungeon Maestro it's fairly clear that there is quite a mis-balance of power between the two gameplay modes, but it never really feels unfair, because it's just so fun!

Dungeon Maestro mode works a lot like a strategy or roleplaying game, before you begin you chose a loadout or deck of cards that can be improved with the purchase of new and better monsters, structures and spells. As the Dungeon Maestro you are given a handful of these cards, and in order to ensure that you do not go mad with power, each card uses a certain amount of mana which regenerates over time, after all, summoning a small group of pitiful wizards is not as tasking as creating a large beer tower.

Most of the fun of the Dungeon Maestro is had in the sheer variety of choice at hand; whilst there isn't a wholly vast quantity of cards at your disposal, picking and choosing the traps and spells that complement each other is a delight, and with cards that will transform unsuspecting adventurers into sheep, drop false health pickups and trap the ninny's with mines, you almost feel as though you are playing a crazy tower defense, except the adventurers are real people, with feelings... 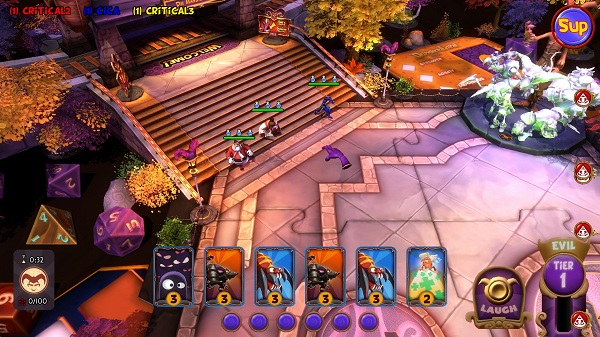 If the strategic placement of traps and monsters doesn't get you excited, the Dungeon Maestro does have another trick up his sleeve, and at any time you can possess any monster in Dungeonland, allowing you to take on the adventurers first hand. Sounds ridiculously unfair, but when you consider that a lot of the monsters in the game are merely cannon fodder this doesn't bode very well for your possess-e, and the ability only really comes into fruition if your hapless adventurers manage to make it to the final boss stage, where your hack’n’slashing skills will be put to the test, because you can control him too.

The game is not very forgiving when it comes to the adventurers; the odds are most definitely stacked against them, and so each stage of a kingdom is broken up into segments that allows the adventurers to replenish their health, but also grants the Dungeon Maestro a new hand of cards to continue the onslaught. To keeps things fresh as you wreak havoc and slay the pesky adventurers your evil gauge will begin to fill, if you can get it to the highest level before killing everyone, then you get an even greater chance at taking them all down with a swarm of enemies, or a particularly big one!

On top of a genuinely challenging hack’n’slash, an inventive, fun strategy, and exceedingly colourful game, the humour of Dungeonland is impeccable! From the phoenix with laser eyes, right down to the descriptions of weapons, armour, perks, monsters and traps, the game will successfully score a giggle or two from even the most serious of PC gamers, some of the lines are writing at its finest, the likes that have not been enjoyed so indulgently since Psychonauts. Which is unfortunate, as, specifically when playing as the Dungeon Maestro, audio samples are repeated exceedingly often, and can get somewhat of an annoyance. 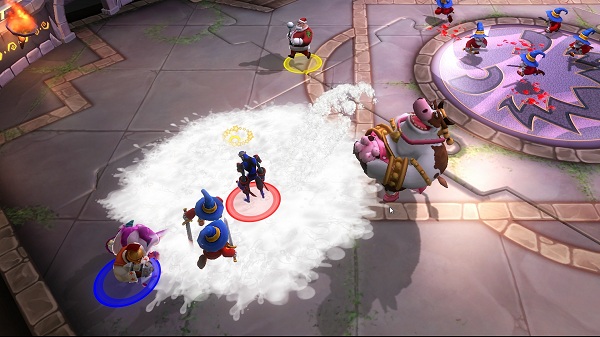 It’s not often that a PC title offers a wide array of single and multiplayer options, Dungeonland allows for standard online multiplayer for three co-operative adventurers and a dungeon maestro, and local co-operative enabling three adventurers against an AI Dungeon Maestro offline, or a mix of long-distance friends and local buddies against your scheming arch-enemy! The only trouble of course is successfully entering a match before the Dungeon Maestro has managed to obliterate the bots that take up empty slots, there are no lobbies in Dungeonland, which can make online games a little messy.

Dungeonland is a rare example of a game that sounds good on paper, and plays like you always dreamed, whilst being an adventurer is an exceptionally tough life, there really is no better trial to test the compatibility of yourself and your friends, just be prepared, you may have to ditch a few of them. Dungeon Maestro mode is purely the icing on the devilishly indulgent cake that is Dungeonland, after all, what other game can you name that has a laugh button!

Dungeonland is available now from all good digital distribution sites for the exceedingly low price of £7.99.