Driving Simulator is the predecessor of Tow Truck Simulator, running in the same engine it is clear from the start how similar the two games are; most importantly you have the ability to shape your experience, to turn on or off functions such as the track assistant, automatic transmission, cruise control, and most importantly, turning off traffic rules, as damage does not play a part in Driving Simulator there is no option for this, however you are able to recover your car if you hit some collision issues and are unable to move, however in Driving Simulator I had hardly any issues with this.

A main portion of the game is to simply drive around and mind your own business, you can choose where you wish to start on the map —handily provided in the installation drive- as well as the amount or lack of traffic you wish to encounter; although apart from when you turn it off, there doesn’t feel like much of a difference. 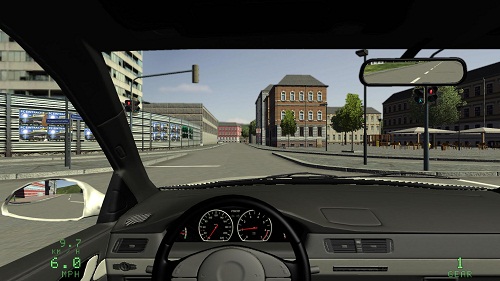 The other half of the game is made up of four different scenarios where you take on the roles of; the driver for a doctor, a pizza delivery driver, a mafia right-hand man, and a security assistant, all of which can be played in any of the 6 cars you are provided with, all taking into consideration the road rules, that will score you penalty points if you do not adhere to them. However this doesn’t always work so effectively if the game does not recognise that you did indicate when you turned the corner, or that you didn’t stop for over 15 seconds when you reach a stop sign.

The missions are simple drive from a-b, usually with quite quirky, although somewhat badly translated mission statements, a good scenario to see an example of this is the mafia right-hand man scenario, where rather than the normal prompt of ‘Do you not use the highway code’ you are given prompts such as ‘You are not driving inconspicuously’. They all of course have a standard difficulty curve, allowing much freedom from the start, which then escalates to time limits and a maximum number of penalties points you can get before you fail the mission.

A good feature of the game, is the save function, which like in Tow Truck Simulator saves in real time, so at any point throughout the game you can exit to the main menu, and go back in, however any missions that you had running will have ended, while on the main menu you can change your car, and can continue where you left off on the map, driving anything from an SUV to a Sports Car, the different cars do not really have different limitations, it’s just a weight issue in regards to crashes. 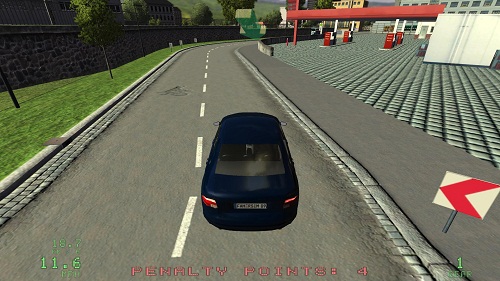 Driving Simulator has an extensive map of the Mittstedt and Autobahn location, unfortunately this is not present in game, but a separate pdf in the installation directory, which is a shame, because at times it would be more advantageous to see where you are headed, rather than follow the pointer, which on occasion can lead you down the wrong road if you don’t know where you are headed. It would also be useful on the chance that you fail a mission, which requires you to go back to your ‘base’ and start the mission again, although the pointer will not inform of its location, so you basically have to find it yourself, or come out of the game, and re-start the scenario.

Driving Simulator is a really great game for those that play GTA abiding by the traffic rules, except the traffic rules are a little harsher , however as a slightly less encouraged side of the game, you can always turn off the traffic rules, and bound around the town crashing into cars. It’s quite fun to play as a delivery game, but of course this can get quite repetitive after a while, and it is a shame that they did not implement any sort of visuals to convey the jobs you are doing, for instance you are tasked with driving the doctor to an old lady’s house who has broken her arm, but you never see any of this, all you see is the journey. 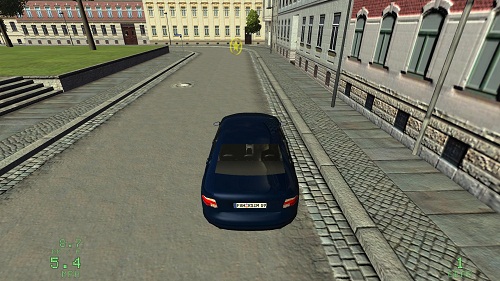 The most alluring side of Driving Simulator is that it is very open to modding, and even comes with a guide to get you started, you can create new scenarios to play missions in, new locations, new cars and new textures for cars, most of the modding is performed in Lua scripting, and is apparently pretty straightforward, the modding community is of course a lot bigger in Germany though, so if you are interested in that side, check out the forums, you will of course need to translate the site if you don’t speak German.

Driving Simulator is a strong base for a road simulator, and if it had a stronger modding community in the UK then the possibilities for the title would be endless. It may not be as fun and addictive as Tow Truck Simulator, but at its core it means well, if you want a game completing missions it’s not bad, however if you want a dab hand at modding in a fairly user friendly game check it out.

Driving Simulator is available now for Windows from all good retailers for an SRP of £19.99.