Yes the granddaddy of the QTE (Quick Time Event) is back again, this time it sees rebirth through Nintendo DSiWare, Dragon’s Lair is one of those classic games that everyone remembers fondly, then you play it and realise you’d forgotten just how frustrating it was, and how much everyone else used to hate it, Don Bluth’s animations are still as beautiful as ever, but has the game itself really stood the test of time? 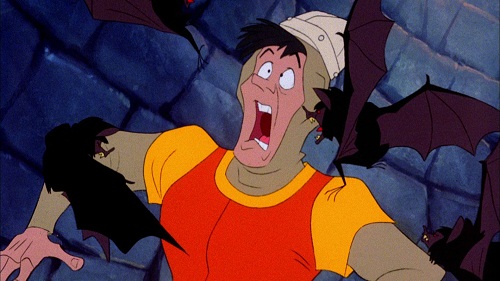 You are Dirk the Daring, a skilled, albeit clumsy knight who is attempting to rescue Princess Daphne from the evil dragon Singe who has her locked up in a wizard’s castle, for a series that has managed to span over 25 years, it’s surprising that although most gamers have never heard of it, Dragon’s Lair has definitely managed to survive, despite its technical achievements being no longer relevant in today’s gaming. 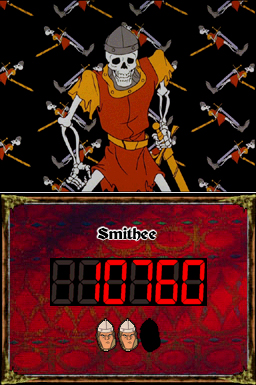 So for those unfamiliar with Dragon’s Lair, the player is shown an animated sequence and then must act accordingly by executing an action by pressing either a direction or using your sword with the correct timing, for instance in the first animated sequence players will see Dirk crossing a drawbridge, tentacle monsters pull him down through cracks in the wood; so you must use Dirk’s sword at the right time to battle the monsters, or he will be dragged into the watery depths below, leading to one of Dirk’s many deaths.

The high points of the game actually stem from the hilarious death scenes that you come across, Dragon’s Lair is what you could possibly describe as an alternate death sequence game, every action that you execute incorrectly leads to Dirk’s magnificently animated death and half of the fun of the game is seeing him perish from your uselessness. Thankfully the DSiWare version gives you the option of infinite lives, as I feel otherwise I would have never reached the end.

In the DSiWare game you have the choice of either playing the classic arcade version, or the home experience that console players received, the main difference between the two is that in the arcade version it is not necessary to finish sequences until you are close to the dragon’s lair, where as in the home version you are always unable to progress until you finish the sequence that you are on. This is included so that players may relive the classic arcade version, as the two are very different. 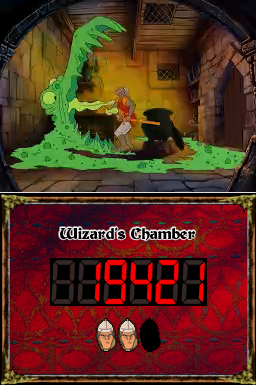 At times it feels as though your commands are not recognised as quickly as they should, and for a DSiWare title that costs 800 points you are getting no use out of the touch screen. The game is also very unfriendly for the commute, when you quit your game there is no going back, and you are forced to start again from the very beginning. Which considering the game takes an undefined time to finish isn’t very suitable for Nintendo DS and the gratification of play that gamers are looking for.

Dragon’s Lair is accessible to all, those without patience are warned as you will soon get frustrated, however if you are looking for what was perhaps the most visually impressive game that reigned for a good 10 years, then Dragon’s Lair is definitely worth seeking out. It’s a trip down memory lane, and just as absurd and hilarious as it always was, just don’t go expecting an ending that lasts more than around 5 seconds. While Dragon’s Lair perhaps doesn’t work as well on the platform as it could, Don Bluth’s animations are still as beautiful as they were 27 years ago. As much as I hate the game with a passion, I cannot wait to see if they release Dragon’s Lair II: Time Warp on DSiWare! 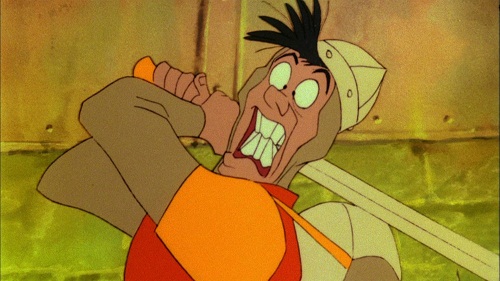 It is a real love/hate releationship with Dragon's Lair for most, so if you’re feeling nostalgic, or wish to relive the days when it was absolutely huge in the arcades, then you can pick up Dragon’s Lair now from the DsiWare Shopping Channel for 800 points.