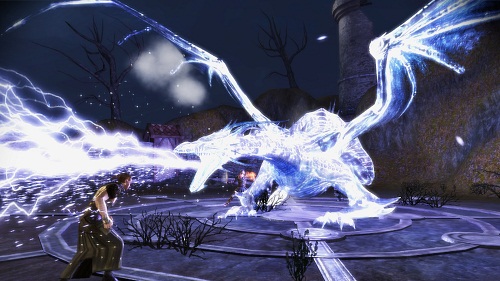 Only 4 months after its initial release, Bioware’s critically acclaimed Dragon Age: Origins has had its first expansion Dragon Age: Origins Awakening, which is to be released at both retail, and available via download. Out this Friday you assume the role of a Grey Warden Commander, where you are entrusted with rebuilding the order of the Grey Wardens after having slain the Archdemon, however you also need to discover how the darkspawn have managed to survive, despite your previous efforts.

Brought to us by the same team that created the original, Awakening introduces Amaranthine, a dark and dangerous new area of the world to explore; you are tasked with unravelling the secrets of the darkspawn, facing new creatures such as the Inferno Golem and the Spectral Dragon.
Much like between Mass Effect 1 and 2, players of Awakening will have the option to import their character from Dragon Age: Origins, or start a new character that will benefit from the new customisation tools that can be used to alter your heroes and party, plus the chance to re-spec their attributes. Awakening features an increased level cap, new spells, abilities, items and specialisations, not to mention five new party members.