I have always held a high regard for Donkey Kong, it's one brand I know has always been brilliant and challenging at the same time, be it Donkey Kong Country on the SNES or Donkey Konga on the GameCube generally they're great examples of games, the Kong's have a lot of character. Honestly the Nintendo E3 press conference couldn’t of been better, it was almost the best of E3, to have a Kirby and Donkey Kong game announced within close proximity of each other was amazing.

Donkey Kong was of course first debuted in games back in the arcades in 1981 and although the first DK games were of a high standard the Donkey Kong name only stuck with me when Rare took our ape friend and turned him into a big name, then there were new Kong's sprouting up all over the place, creating a family for the once lonely Donkey Kong.

Now Donkey Kong is back for more in his first real platformer on a console in over 10 years (not including Jungle Beat) of course with Rare being under control of Microsoft Game Studios now, a different developer had to take this Country sequel in their own hands. Retro Studios are working on the title, who most people will know as the developers of the newer Metroid Prime games (Metroid Prime, Metroid Prime 2 Echoes, Metroid Prime 3 Corruption and the Metroid Prime Trilogy) 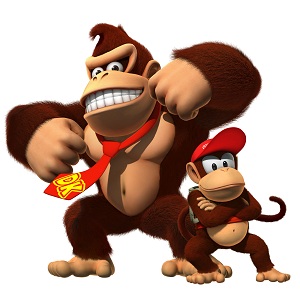 One thing I've always thought of with Donkey Kong games is instances of gruellingly hard tricky bits of gameplay, and it still lives up to those old feelings. There are limited checkpoints in each level and of course anything you pick up after a checkpoint you will have to pick up again if you die, like those pesky KONG pickups, You are limited to two pieces of health before you loose a life and this made it feel quite tricky, although having a good number of lives throughout the game managed to balance this out.

Like always though Mr Kong looks great in his environment, and was able to interact with it in a variety of ways, there were small dandelions which you could have Donkey blow them, or the small fruit around the levels which if hit they'd generally spit out a prize for doing so. One thing that felt slightly odd about the game was the increase in collectables to gather, it was more then I'm used to with a Donkey Kong game, although I'm sure this is added to enhance the playability and addictiveness of collecting everything so you can 100% the game. The game also features two-player co-op allowing one player to assume the role of Donkey Kong and the other Diddy Kong, overal this works well as Donkey Kong has usually had Diddy in his control in the past, this time it just means someone can control him even more.

I played two of the levels available which were Jungle Hijinx and Poppin' Planks, which both felt comparable to the original Donkey Kong Country titles, however there is an absence of Kremlings as the bad guys this time round. This time some evil Tikis have taken control of the inhabitants of the environment and once again they've stolen Donkey Kong's bananas which with the help of Diddy Kong he must get back, as you don't want those apes to starve. As of yet there's been no confirmation if the rest of Kong's family or their animal buddies will be featured in this revival of the series. 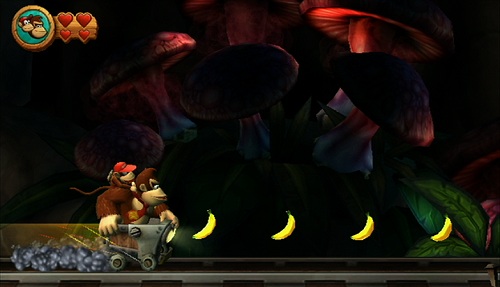 Unlike Kirby's Epic Yarn the control system wasn't explained right at the start of the game, and it felt quite sparse. Of course this isn't a huge issue, but with a lack of tutorials on the Nintendo Wii it could alienate some users, it was nice for a change to not be bombarded with tutorials.

Overall I really enjoyed playing this revival of the original Donkey Kong Country titles, it felt just right and had all the aspects that will feel familiar for those that played the originals. It gives you a similar nostalgic feeling, exactly like Kirby does and I can't wait to see what Retro Studios have done to the rest of the game as so far it's definitely on the right track and I cannot wait for it's release at the end of the year.