Dollar Dash is a new fast paced multiplayer game, think of it like Bomberman meets Bonanza Bros. in an arena reminiscent of the good old days of Mario Party, the aim of the game is to pocket as much cash as humanly possible in a selection of game modes whilst you shoot, trap, squish and generally outdo up to three other players in some genuinely frantic play across local or online multiplayer that is generously drop in/drop out.

The game consists of three different modes; the titular Dollar Dash in which all four players must pick up as much cash as possible before the getaway van parks up for you to deposit your cash until it disappears and you await its next arrival. The second mode Hit and Run is more of a traditional death match; manage to take down a player and you will pocket some money, with the first to the predetermined amount named as the winner. You could best compare it to a game of Poy Poy or Bomberman, except it’s even faster, if you're looking for some purely simple destruction this is the mode you want, no thinking or fancy moves required, just a good aim and a trigger happy finger to knock your opponents down. 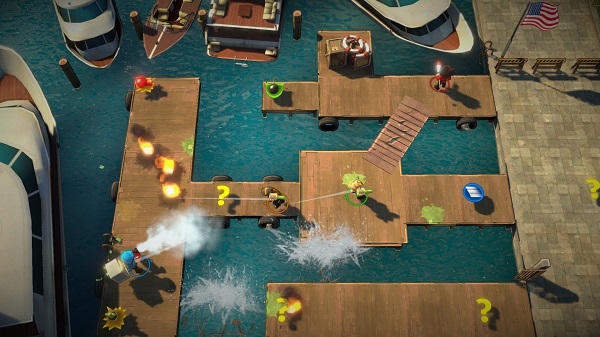 The last mode is Save the Safe, which is a darn sight more structured than the other two modes, but in some respects this makes it possibly the least fun. The four players are deposited into each corner of the arena of your choice, and in the middle of the arena is the safe, if you beat the rest to the elusive safe and manage to pick it up you need to rush around the arena clear of your foes and hold it for the required amount of time to win. It’s not necessarily a bad game mode, however it can turn very one sided as three players make a mad futile dash for the other player who managed to nab the safe from the get go, and due to the slow and bouncy controls of your little robbers you just can’t catch up to them before they are half-way to winning.

Now Dollar Dash plays out in two different ways, which depends on the type of people you are playing with, in between each getaway arrival you're let loose to pick up as much cash as possible that is dropped into the arena, some players will relentlessly knock you out stopping you from pretty much playing during these periods, and other players will play properly; throwing snowballs in your general direction and grabbing all your money you drop before focusing on another player. Basically you can play the game fairly or like a proper bad egg, however it clearly feels that this would just not be the case if the knockout system was not so harsh, whilst it needs to be in the other game modes, in Dollar Dash it just comes across as unfair. 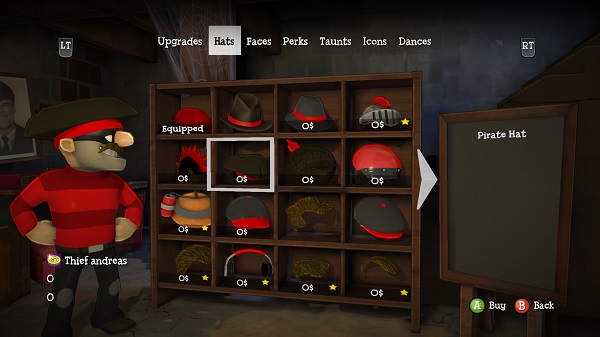 Control is where the game falls flat, your little robbers are generally pretty slow, and their movement in particular is very bouncy and in fact on the verge of floaty, running around the arena with the aim to deck your foes is a challenge in itself which is hampered even further by ranged weapons; whilst there is a manual aim present, you always feel far too busy concentrating on where your opponents are, and what is flying at you, that thrown weapons become a twitch-reaction. The same occurs with your other mode of offence, and setting traps becomes a necessity when running away from your opponents, and so in turn the only real strategy you can gauge out of your inventory ends up being your most important ally; your defensive items. These can range from protective jelly moulds, temporary invisibility, health packs and a speed boost that when utilised at the correct time are pretty much guaranteed to protect you on that all important run to the getaway van, and secure those imperative last few seconds as you take the safe with you to glory.

Each game type can be played in a number of the same arenas, now this is where things begin to get a little messy, and you'll be glad that the game only supports four players because it’s about to get busy! Each arena is fairly cosy, which is a necessity with the average speed of your pint-sized characters, however they all have their own individual hazards on top of the ravenous players and their traps. This turns levels into a literal death trap and between dodging search light, trains and falling platforms you'll be very lucky if you manage to grab a couple of notes. 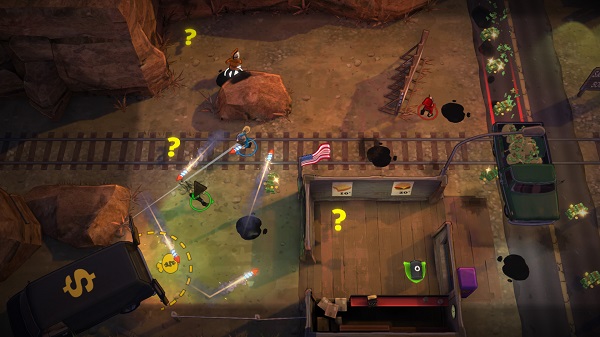 As an arena based multiplayer game with a focus on knocking your opponents out there is a wealthy selection of weapons to take each other out with, these consist of all manner of ordnances ranging from snowballs, nukes, boulders, fireworks, thrown cacti you name it, there’s probably a weapon for it in Dollar Dash. These projectile weapons are your main mode of attack that will drop precious money from the bodies of your cold, unconscious rivals, however they aren’t your only option and traps can be dropped to put your pursuers off your trail with a well-timed oil spill, bomb or even gaping chasm.

The simple cartoony style of Dollar Dash is reminiscent of Candygun's previous game Dead Block similarly, Candygun have hit the nail on the head with their music once more, with a mix of cheesy gumshoe tunes, and intensifying music that changes with the situation you are currently in, it does really help to get you sucked into the moment. To throw in a bit of individuality you can customise your character with oodles of unlockable items ranging from new hairstyles, beards, glasses and hats, unfortunately the items whilst solely cosmetic cost the earth so you'll need to best your friends or the AI at the different game modes on offer very often to afford them.

The true downfall of the game comes about if you are unfortunate enough to have no friends, be they remote or local, because any spots not filled by warm bodies in a game will be occupied by AI bots. These are not your standard unassuming space-fillers, the bots in Dollar Dash are particularly harsh even on moderate difficulty, and they’ll knock you down from the other side of the arena with some of the most pin-point accurate shooting you’ve ever seen! They make playing the game outside of true multiplayer extremely unfair. 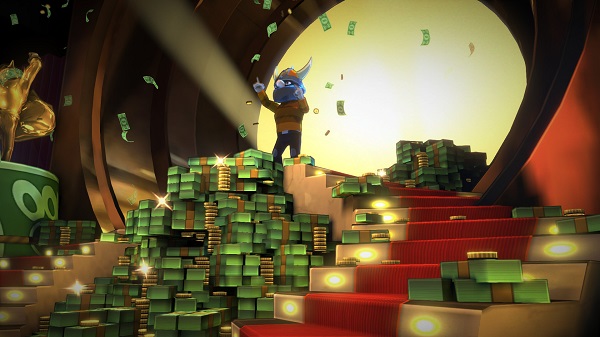 However something that the game does manage to pull off to a tee is the brilliant frantic nature that the game instils, as if it isn't enough to have your opponents out for your blood, and each arena 'comes alive', to top it off as soon as a player has enough money in their bag to win, everyone will be informed that 'Red is about to win' now I don't know about you, but if the spotlight is suddenly put on one player as they are ready to burst with the cash that they are carrying, and you just so happen to be that person, things start to get a little tense. It’s the same feeling you get when you know a blue shell has been unleashed in Mario Kart and you just so happen to be in the lead, there's little like it!

Dollar Dash is by all means a fun party game, and whilst its drop in drop out multiplayer can leave you in a game with bots as soon as a game is not working in someone's favour, its frantic pace and messy arenas can make the game quite hectic if you are used to a bit of structure, just remember if you see a player with a nuke run as fast as your little feet can carry you.

Dollar Dash is available now on Windows PC, Xbox Live Arcade and the Playstation Network for £7.99, 800 points and £7.99 respectively, it’s a relatively fun party game for a quick round or so, but you won’t be hooked for hours on end, because you’re bound to lose sooner or later.