Kalypso and Candygun Games are bringing out a new and exciting multiplayer-based game where you play as crazy weapon wielding robbers trying to grab the most money you can handle. Even though the focus is on multiplayer it still manages to offer a huge amount of amusing gameplay. You take on the role of a cartoon thief who must obtain the most cash within the round to win…sounds easy doesn't it? However I'll let you know that it is quite the opposite.

Dollar Dash screams customisation, from the menu there is a shop link which takes you to the vast customisation and personalisation section where you can choose from a large selection of different items. There are upgrades which can do things like increase the speed of a toilet plunger or make you immune to your own cacti when you throw them. If you like playing with the way your character looks in games there is a lot to choose from, you can put on hats and also different faces/facial accessories, so for example you could have an afro or a beer-hat accompanied with some cool shades or an eerie looking hockey mask. There are also different perks you can choose from to further improve your thief, icons to either identify where you're from with a flag or a funny picture, and lastly to complete the customisation phase you can choose a taunt to tease your friends with and a comedic dance for when you win a game. As you earn more money from playing you'll be able to unlock more items to make your thief look more ridiculous and earn better upgrades. 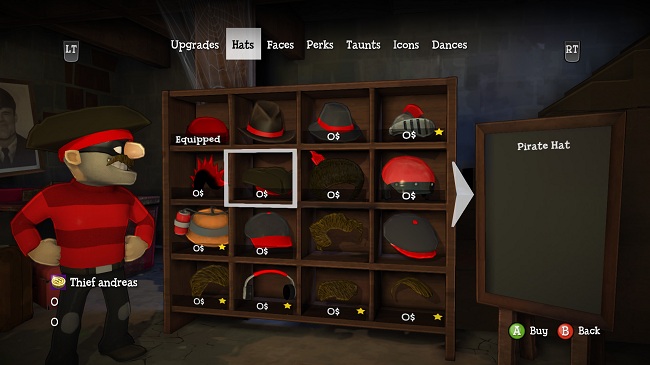 Dollar Dash lets you drop-in and drop-out in online and offline multiplayer where you can have up to a maximum of four players on a map. There are three chaotic game modes, Dollar Dash where you have to collect the most amount of money and get it to your getaway vehicle before your fellow robbers do. Hit and Run where you and three others pummel and smash each other around to steal each other's cash. The final mode is Save the Safe where you need to grab the safe and keep hold of it to win, the longer you have it the more money you earn, but obviously you will have your thieving friends trying to get it off you which makes it very hard.

The three modes hold 18 colourful maps, from a museum where guards fire upon you if you get seen by their flashlight to harbours and building sites, all with their own unique hazards. Throughout each match an array of bizarre and interesting weapons spawn at different points on the map. There are different types of power-ups which help increase your speed or allow you to pick up money faster, along with weapons of destruction such as fireworks or bombs that allow you to knock out your enemies and steal their money.

Unfortunately I was only able to play against bots so as you can imagine the fun was not as intense as playing with friends would be, although I can see that if you were able to get four friends together and fight it out then it would be a real laugh promising hours of fun. None-the-less it was still amusing to fight against the bots to steal their money and use all the weapons. Playing against the bots is also great to train yourself up by changing the bot difficulty from noob to pro. You can then also learn the maps as some of them are quite challenging making it really fun just playing with bots so I can only imagine the final game will be even better when playing with lots of money grabbing thieves. 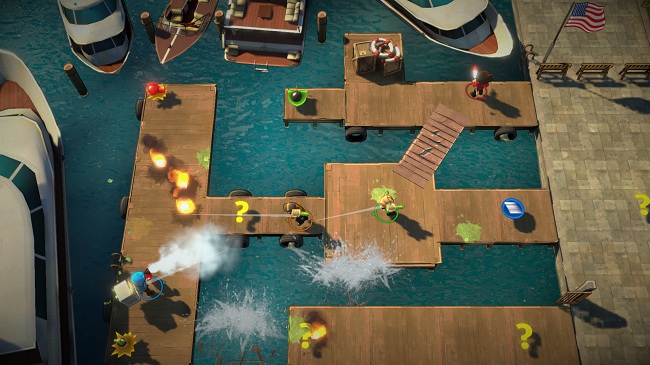 Dollar Dash looks to be an exciting addition to anyone's digital games library and with its crisp cartoony graphics it helps supply the laugh-out-loud moments in style which will most definitely occur while you and your friends battle it out to become the richest robber out there.

Given the popularity over the past few years with quick to pickup and play titles I would definitely recommend giving Dollar Dash a try when it's released on Xbox Live Arcade, Playstation Network and Windows via Steam around the end of November this year.