Finally for all those TV-license paying individuals out there, you can now enjoy video games produced by the BBC’s budget. The Doctor Who Adventure Games are the first real video games based on the extremely popular UK Sci-Fi television series of the same name; and best of all is this series of games are in fact, real video games in the total sense of the word.

The first episode; City of the Daleks is set in the year 1963, however Trafalgar Square is in ruins, and the last of the humans are setting off dynamite to try and cull the Dalek threat, as we all know, as soon as the Doctor arrives on the scene the world will be fixed in a manner of 45 minutes around things won’t stay wrong for long.

The games functions as a pseudo adventure game with an integrated stealth system, that doesn’t rely on you remembering tens of controls, instead there are three ones that are very difficult to forget; looking, —with the mouse- moving around, —holding the rmb or arrows- and using your inventory —with the middle mouse button- which makes the game extremely easy to simply pick up and play. The stealth system works with this easy control system, in that the Doctor crouches in stealth mode when the game deems it necessary, and is able to run the rest of the time.

Alongside sneaking past Dalek’s Metal Gear Solid style, you will also find yourself at numerous points in the game collecting various bits-and-bobs, either as the Doctor, or Amy in order to solve puzzles in your general adventure gaming style, you will also be needed to take on several small puzzles throughout the game, such as connecting wires on circuit boards, or matching symbols in a fast paced somewhat rhythm action game, just without the rhythm. 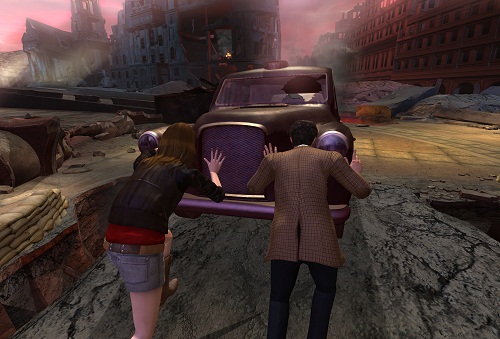 The episodes function like real episodes, and although they do not seem as long as the 45 minute shows, the action sections of the game do bulk them out significantly, the production values are just as high as the show, the dialogue is fantastic, and the models and art are just as high as that on any other adventure game you could buy in a shop.

For a free game the series is fantastic, and definitely deserves a score that reflects the quality of the game and with another 3 episodes on the way, and more if they are well received, the Doctor Who Adventure Games series is one that fans of adventure games, and the show should check out!

The Doctor Who Adventure Games: City of the Daleks is available for download now for Windows from the BBC's website the Mac version will be available from June 15th 2010.