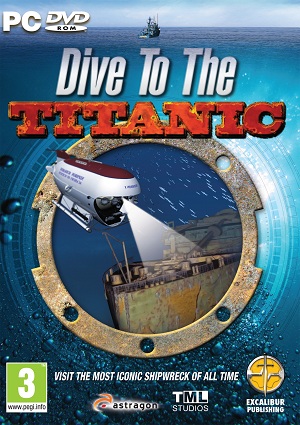 Get ready to Dive to the Titanic in Excalibur Publishing's newest story based simulation title, aptly named Dive to the Titanic. At its core the game is really light edutainment, but not 'serious' enough to be considered full on educational, in a small submarine you will explore the legendary vessel whilst being handed titbits of information and facts on the great old ship.

Your mode of transport as you investigate the Titanic is the small submarine Nephron. With her you will dive 4000 metres under the ocean so that you may park up next to huge sections of the Titanic and utilise your controllable camera robot. With the camera you can take exquisite photos and fully explore the smaller sections of the Titanic that the Nephron will not allow you to venture into.

On your explorations you are observed and guided by who appears to be a sort of Scandinavian Atlas wannabe, if you don't know what I mean by Atlas, perhaps you should check out Bioshock. His instructions can get a little grating at times but he is there to help, and if you do get into a situation where you just don’t realise where you are meant to be going, his advice can come in hand.

The graphics are quite exemplary, and compared to most simulators released on the market, Dive to the Titanic is a veritable Crysis of the simulation world, that said the Titanic upon first glance is simply a marvel of graphical capability and what has been achieved is fantastic. However as you progress through the varying decks of the Titanic everything does begin to look the same, and as you go about your way photographing your goals you will find that you yearn for the sights to be a bit more exciting. That said Dive to the Titanic has some of the best sights ever seen in a game focused around the Titanic, and its desolate hallways are eerily fantastic, plus with the brilliant score, you will find yourself spooked by the subtly ghostly ambience. 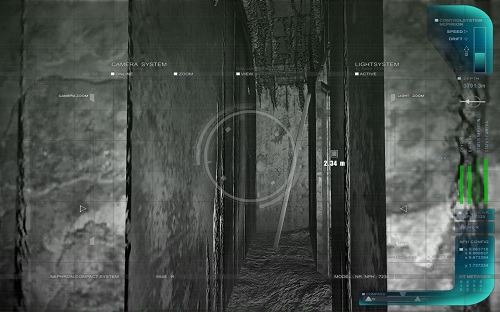 As a game rooted in the simulation genre, Dive to the Titanic is not without its technicalities, and you will always be displayed with readouts containing your submarine’s depth, speed, drift as well as the extremely important levels of your oxygen, battery and the status of the ship you are in. Whilst it is fairly easy to keep all of these stats in check, when you begin to dive deeper into the heart of the Titanic it is difficult to pull yourself away just to recharge your battery, and therefore very easy to get stranded at sea if you get a little carried away with yourself.

The control of the submarine and the camera robot are fairly straightforward and generally very easy to pick up, and as both systems control with the same keys you won’t find yourself lost around the keyboard trying to remember what key does what, and generally as simulation games go, the control system is exemplary.

Rather than simply exploring the Titanic, you are tasked with the job of photographing certain areas of the ship for monetary value, as well as discover artefacts to fuel the purchase of more sophisticated equipment that will allow you to venture further into the depths of the Titanic. The story arch takes place over a manner of time and can be played in one of three difficulties that will take your vital statistics into consideration as you progress into harder levels as you race to your inevitable fate in 5 days.

If you are curious enough to venture far enough into the Titanic you will unlock the brilliant free roam mode that will allow you to explore the Titanic at your own leisure. Whilst delving deep into the wreckage of the Titanic you will also gain a wealth of history and background information on the people and locations around the famous ship, courtesy of your Scandinavian friend. 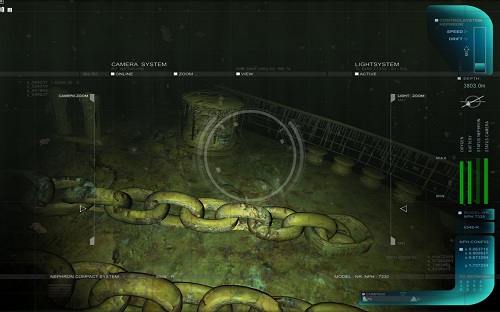 Dive to the Titanic is definitely an extremely interesting concept, and a brilliant example of how simulation titles can embrace story lines and still capably be both engaging and technical. It proficiently allows you to explore an eerily desolate Titanic wreck with enough detail and background information to engage Titanic enthusiasts and newcomers to the historical ship. Just make sure to surface before your batteries run out or you’ll be in deep water —literally! 4/5.

Dive to the Titanic is available now in all good retail stores for the SRP of £24.99.