It’s that old chestnut; deep in dismembered corpses you’ve valiantly fought your way through 2 levels of a particularly tasking cave, to find that the Dread Warriors have caused an uprising two levels above you, and if you aren’t careful they will shortly make the surface and attack your town. But you’ve got to deliver a package before the recipient loses interest, and then you realise that you forgot to visit Bob the peasant and lend him some money, and it’s too late he’s starved to death. Doesn’t sound familiar, well then maybe you should be playing Din’s Curse! 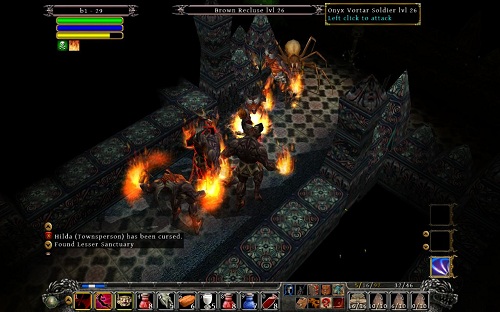 First impressions of the game will immediately bring memories of Diablo, comparisons of Torchlight, and many other dungeon crawlers; however appearances can be deceiving, Din’s Curse is a dynamic indie dungeon crawler with a lot of heart, and an addictive nature.

What makes Din’s Curse different to other games is that there are not throngs of stories that you must keep up with, instead there is one sole story arc, where Din, Champion of the Gods has cursed your character into a life of service after you squandered your first one causing misfortune to those around you. It is up to you to save desperate towns from the brink of annihilation, in the hope that you will eventually redeem yourself.

Each town is extremely dynamic; if you don’t pay attention to the citizens, things will happen, peasants will starve to death if they get in debt, waves of monsters will scourge and pillage towns, killing the town’s Weaponsmith’s, Stewards and other important NPCs. Not even the demons and monsters in the caverns are safe from each other as factions cause uprising in dungeons against others for local domination.

If you look after your town, build them totems when asked, supply them with armour and weaponry and donate money to them every now and again, they will be able to fend for themselves, propel the uprisings that spring from the caves onto the town, and ultimately your attempt to save that town will be a success. Work poorly, ignore your township, pay no attention to their pleas for help and they will fall, and you’ll find yourself failing quests left and right. In Din's Curse we are not living out a fairytale game state, everything is at stake, and everyone can die. 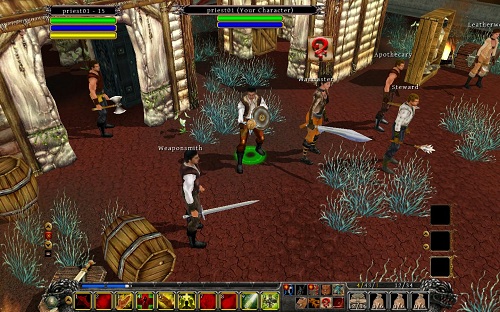 When you have finished all of the quests possible in a township you’ll get a dinky little stats screen, informing you of your biggest accomplishments, most impressive kills, as well as the amount of quests solved, those that you sadly failed, and the number of NPCs killed; either by raids on the town or via negligence, my personal highest number is 27, and boy does it make me feel dirty!

Each town is created dynamically, you can scale the difficulty that your dungeons will be, and if you are looking for a tough journey you can set the difficulty far higher than your current level, or nice and low, it is tailored to you own wishes. To add a bit of unpredictability you can decide to introduce dangerous creatures that will make creatures infrequent, or perhaps you want to encounter even more enemies, they will however be very easy to take down, or maybe you want to start a town which will receive a wave of 100 monsters, the choice is literally yours.

At Gamercast we are used to trawling the options of simulators, so we were pleasantly surprised to see a host of fantastic options that World of Warcraft could have really used right back at the start. Perhaps the best option that is at your fingertips is the option to ‘Hide Crappy Items’ and ignore anything that isn’t worth your time, or you can display a clock to ensure that you don’t end up playing Dins Curse for the whole day. There are even a host of options to remove a lot of the HUD, including XP indicators, damage numbers, health bars, you name it! Din’s Curse has literally a treasure trove of options, do not play it without checking them out! 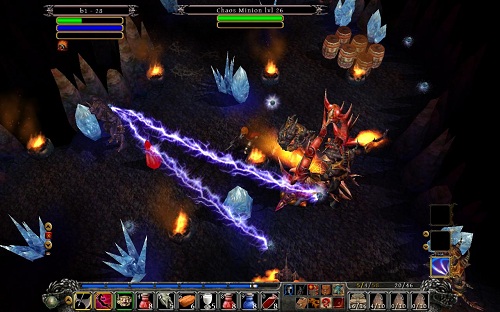 If endless dynamic questing towns were not enough, there’s even more replayability yet! With 8 playable classes, the skill system allows for 141 class combinations via the Hybrid class, and with the addition of Demon War there are an extra 55 combinations with the supplement of the Demon Hunter class, alongside the more traditional classes; Wizard, Warrior, Rogue, Priest, Ranger, and Conjurer that all have three different specialisms to take.

If you thought the customisation stopped there, you’d be wrong! You can also add special character traits such as; Unlucky, Clumsy, Hardcore, Prima Donna, Fragile, Hunger and Honourable Death. The more interesting traits like Semi-Hardcore; which drops your vitality -5 after every death, true Hardcore, where death means game over, and the fantastically challenging Honourable Death, which spells disaster for your town when you die, unfortunately the hardcore mode, which can be coupled with Honourable death can only be unlocked after raising a character to level 25.

The true buzz word for Dins Curse is dynamic, but it is all true, you won’t find one scripted event in the game unlike Diablo, Magicka, Torchlight, you name it, unless it is procedurally generated there is no dungeon crawler that rivals the dynamism of Dins Curse, you will literally be on your toes throughout the game, you never know what to expect which is what makes the game all the more engaging.

Now this all sounds fantastic, and the game truly is, however there is always a downside to everything, and the issue that some players may have with Dins Curse is that the graphic and audio design leave you wanting a little more. If you are spoilt and expect every game to look photo realistic, with sound design that pulls you into the game, then you will feel a little lost in Din’s Curse. If you can put that aside, and just want to get down and dirty with some good old dungeon crawling, put on your armour, compare the stats of your bracers, then jump in and save a random town from annihilation. 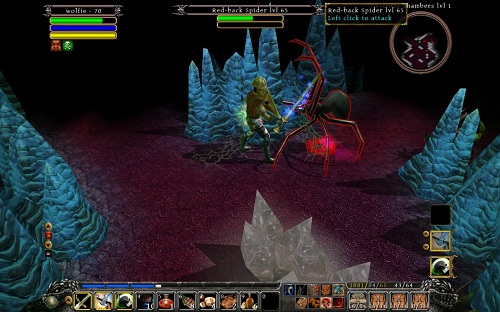 Din’s Curse is a fantastic casual long running game, with only one long story arc, and very small quests on the side it is a game that you can continually visit with no fear of losing your place. With the massive replayability aspect, as well as the Demon War expansion, and the sheer ability to spend hundreds of hours under rule of Din. I have barely scratched the surface of the game, which at heart is ‘click to attack, rinse, repeat’, however Soldak’s ability to create something that isn’t just a Diablo clone, is inspiring.

Din’s Curse is available now on PC/Mac for a mere $19.99 with a 30 day money back guarantee, nevertheless it is money well spent, and it rivals certain dungeon crawlers that lack the true danger of losing it all. Better yet it will also run on most standard PC’s, so forget about your pile of games, give Din’s Curse a try.

With added online co-operative multiplayer features, official and unofficial mods, you will literally never run out of things to do in Dins Curse, however if you do wish to play online, you will need to set up your own private games, as there doesn't appear to be any servers running.