Demon War is an expansion to the curiously addictive indie dungeon crawler Din’s Curse that we recently reviewed after we could tear ourselves away from it. We needed an excuse to keep playing it so we decided to follow up with a review of the expansion released last year; Demon War, which brings a selection of new features to the questing prodigy.

In the Demon War demons of all kind are fighting back, they’re hunting down and killing every undead, and blame the humans for the mess that the world is in, as a servant of Din it is your responsibility to safeguard the humans from danger. So expect to see a lot of fighting going on in the dungeons, you’ll even have quests finishing because demons have taken down important undead figures, it does however mean you’ll get a lot of attacks on the town.

The biggest addition to the game is the new Demon Hunter Class, now this marked my first foray into a magical class in what is possibly my whole gaming life; I’m a warrior at heart and always will be, but I was surprised to find the magic system fairly comprehensive, simple and effective. 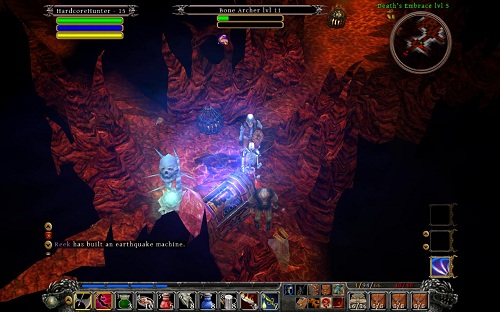 Like all classes in Din’s Curse the Demon Hunter class has three different skill trees each centred on a particular type of talent, of the Demon Hunter you can become a Reaver; skilled in performing buffs on yourself that will improve your critical hits, armour piercing and damage, or passive skills such as the ability to wear Plate Armour.

The Warden tree again is very standard, and is probably most comparable to a Paladin; its selection of shields and wards are very effective protection against the savage demons and undead littered from dungeon to dungeon. The Banish skill is a particular nifty one, allowing you to teleport the enemy currently targeted away to a nice safe place far away from you. Perfect for when you’ve just got a few too many enemies on you, just don’t go doing it to a dungeon boss.

Now these two trees may seem a little dull to the heroic title of Demon Hunter, after all any average-joe-warrior could call themselves a Demon Hunter if it involves a few ward spells and some buffs. Now the Demonologist tree is what you’ve been waiting for, with attacks allowing you to transform an enemy into an ally, become a demon for a short period of time and turn into a living inferno. The Demon Hunter class is definitely one of the showiest of all the possible classes in the game. 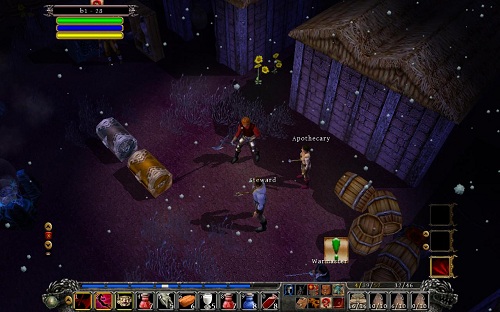 Dungeon crawling takes up 80% of the game, so Soldak added 3 new species of Demon to combat, which introduces 8 new types with a total of 40 different variants that you can come up against in the dark depths of a town’s dungeon, making the game slightly less repetitive in terms of the factions of demons that you will encounter. Din’s Curse wouldn’t be so addictive if it weren’t for the numerous quests and goals given to you by the townspeople, so in Demon War a lot of new possible quests have been added to ensure as diverse a play experience as possible.

One of the biggest add-ons in the expansion is less obvious than a new class or new demons; instead they add to the dynamism inherent throughout the game. So expect to see more varied environments from your towns and dungeons, more world modifiers to hinder your progress through the upper levels, and more interaction between townsfolk.

What is important to note is that Demon War is not a standalone expansion, and is enjoyed with Din’s Curse in the same way that an expansion of World of Warcraft is engulfed into an already full and dynamic world for optimum satisfaction, allowing it to be enjoyed on a more subtle plane that is not overly thrown into your face in a new area like Fallout expansions. 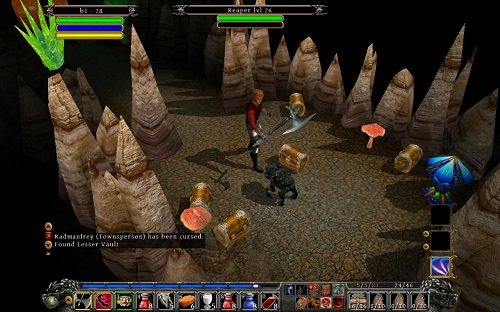 After spending countless hours saving towns, clearing dungeons and questing I stopped to evaluate exactly what makes Din’s Curse and its expansion Demon War so addictive, and there’s a certain desire in gamers to finish a game, it’s the same reason that many gamers have hoarding natures; there is a need of completion. Din’s Curse fulfils that need of achievement again, and again, so much so that as soon as you start a new town, you just want to complete it and finish all of the possible quests.

Whilst some may not appreciate that Demon War is more of an understated expansion, the low price of $10 gives you a new and extremely exciting class, and the probability that each town you go on to save will be far more varied than in the standard game. So if you want an excuse to spend countless hours at your computer, get Demon War, and make a Demon Hunter, I’ve not looked back since.

Din’s Curse Demon War is available now for $9.99 and runs on both PC and Mac. If for some crazy reason you aren’t satisfied with it, there’s even a 30 day money back guarantee. You will need the Din’s Curse base game in order to play it.