Welcome to Defenders of Ardania, a game that looks at the current state of tower defense and decides that it needs a bit more strategy! They combine the strategic placements of towers with the real time strategy concept of unit manufacture it all works rather well, you just have to make sure that None Shall Pass!

Defenders of Ardania takes place in well... Ardania; the fantasy realm created just over 10 years ago for the Majesty series, a kingdom well known for its deep roots in fantasy and its importance on humour. So you're guaranteed to have a few laughs here and there; whether it's the fantastic Sean Connery impression of the narrator or a reference to Star Trek, the guys at Most Wanted Entertainment know how to tickle your funny bones! 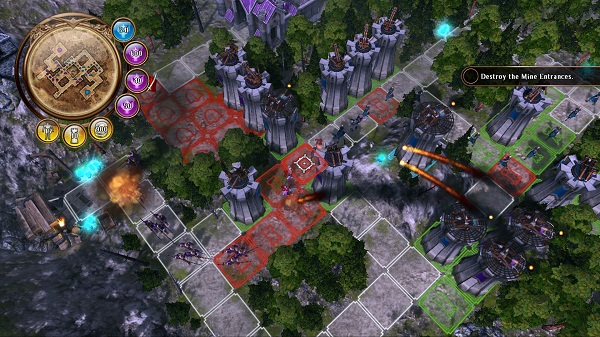 The game is fully focused on the single player campaign, and whether you wish you play a quick skirmish, or best your friends in multiplayer you'll need to complete as many single player levels as possible or you'll be limited to the maps that you can use, just be prepared for a lot of tutorials, and a pretty slow learning curve.

The two important weapons at your disposal are your towers and your units, as you would expect the towers protect your base from incoming enemy waves, however in Defenders of Ardania the point of the game is not to simply survive waves, but to counterattack your opponent and destroy their base with your own waves of units.

The towers work on a grid system, and the variety is your standard fantasy-medieval affair; ranging from ballista’s to fire towers. Now of course you can’t just go building towers all over the shop, there’s a pretty neat ‘fog of war’ in effect in Defenders of Ardania that stops you from placing a tower on any old square; from the very start of a level you can place a couple of towers close to your base, as you place towers your ‘fog of war’ increases and you can build towers slightly further away, the method is ingenious, and really works for the strategic approach of the game. 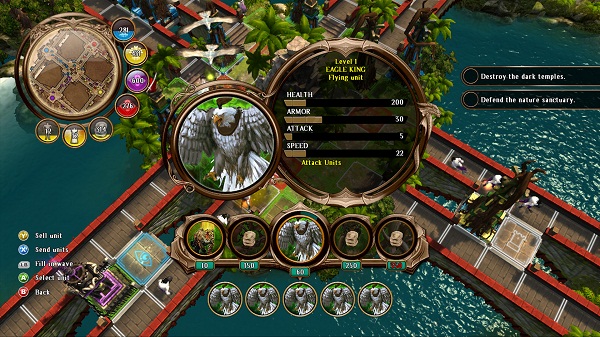 Your waves can be made up of five different units that range from pure cannon fodder to hulking tanks; you need absolutely everything to keep your waves strong against your enemy’s defensive towers and get them to their base for the most effective assault. As your waves get through they will gain experience, get each to level 3 and you will gain access to the hero of the unit. A level is always won far easier with high level units, which unfortunately means you will struggle until you get the that point, and will often find your battles drawing out.

Now it sounds pretty easy to simply overrun your opponent with wave upon wave of units, and defend your base with a metropolis of towers. Well it’s not that easy; each level you will be limited to the amount of towers and units you can have on screen, of course as the levels increase in difficulty so will the number that you are allowed, whilst it seems unfair, it is yet another strategy concept that has been embraced into the game.

Of course units and towers are not your only hope; as you progress through the story you’ll gain access to magic, and even upgrades that can help turn the tide of war in your favour, however everything comes at a price, and in Ardania that price is cold hard gold! Whilst your base will regenerate gold at a steady rate it is those first few hundred pieces that really determine your fate at the very start of a battle; so it is imperative that you place your first few towers wisely. 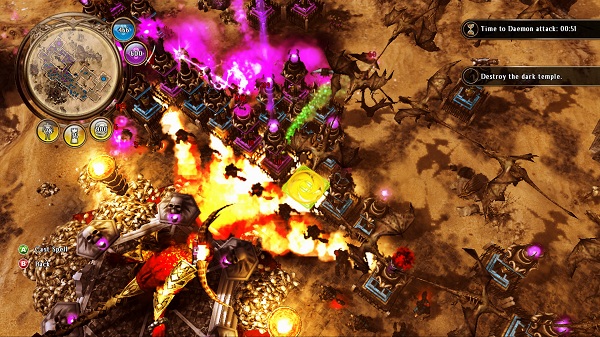 All of the maps are quite self contained, and it can get VERY busy on screen during a level, whilst it is good to see a tower defense so compact and therefore 'tight' it can get confusing to which towers are whose, and even which enemies are whose, there are colour schemes present on each different players towers and units, it is just too small a detail to see; at least when you are playing a few feet away on an Xbox.

Aside from the campaign you've skirmishes and multiplayer that are basically one and the same thing, just one is with an AI the other with a player, the skirmishes can be quite entertaining, and whether you want to attempt a level with limited resources for the entire game, or play a true tower defense in survival mode the choice makes a nice addition to the game.

The Multiplayer aspect allows you to play levels with 2-4 players, allowing you to ally up with 2-on-2 or a simple free-for-all, however as a warning the free-for-all can take quite a chunk of time out of your life, and it'll usually boil down to the two best players that can keep a match going for quite a while, unless everyone decides to gang up on one another of course. 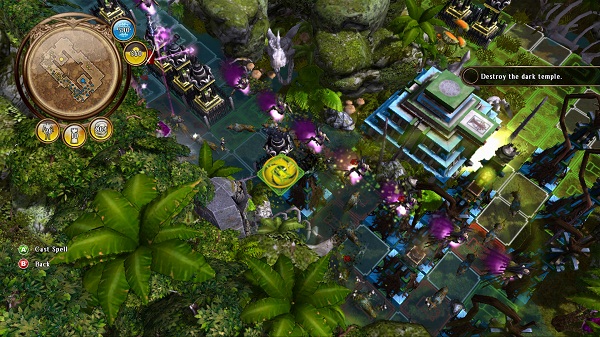 The Tower Defense genre works so well on a base level for their simplicity; lay a tower and it shoots down the waves, however, lay a tower and send out a wave whilst your opponent does the same thing ends in your wave getting shot down, and their wave getting shot down, and often it comes down to less about strategy and more about your sheer weight in numbers, which is unfortunately the bane of the game.

Defenders of Ardania is both an enjoyable and challenging game, although unfortunately whilst the concept of a tower offence and defense sounds fantastic on paper, it does not translate perfectly to play, and it is not uncommon to find yourself in a bit of a stalemate during a level or with a competent player online.

Defenders of Ardania is available now on the Xbox Live Arcade for 1200 Microsoft Points, as well as for PC and iPad.