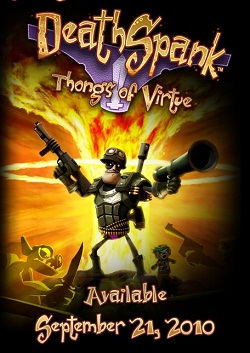 In what is possibly the quickest sequel in video game history, our loveable hero to the downtrodden, DeathSpank returns in DeathSpank: Thongs of Virtue, in another supposed true story, DeathSpank's quest continues where it last left off in the original game released only 3 months ago.

Thongs of Virtue opens with DeathSpank in a slightly worse situation than we last saw him, recapped with a simple 2D cutscene he’s been through the wars, and is down-and-out in a PoW camp passing his days peeling potatoes, it’s up to you to devise an intricate plan of escape in order to ensure that DeathSpank will continue to defend Justice, Vanquish Evil, and remain a hero to the Downtrodden.

Instead of your simple battle of good and evil, Thongs of Virtue follows DeathSpank in the quest to rid the world of the remaining 5 Noble Thongs that have corrupted their original owners who were intended to keep the world in balance. Hunting after the owners of the thongs of Courage, Compassion, Peace, Generosity and cuisine will have DeathSpank hunting after a Nun, Santa Claus, a TV Chef and many more with the expected comic-based styling’s that we came to expect from the original DeathSpank.

As old as it gets, DeathSpank: Thongs of Virtue is still very much Diablo meets Monkey Island, however now DeathSpank has guns! So it's slightly more like the fun styling's of the classic Gremlin title; Loaded but with RPG elements. Plus with hours of dialogue to have a giggle about and hundreds of quests, alongside thousands of pieces of loot you’ll be royally hooked.

DeathSpank with guns is like Bejewelled with unlimited lives, it extends the fun of the hack-n-slash gameplay tenfold with the addition of pistols, flamethrowers, grenades, bazookas, assault rifles you name it DeathSpank is packed to punch —no really, at one point he even dresses as Rambo!- and ready to start a full scale onslaught, if you're not gunning down robots you're busy fending off monster Yetis with incendiary Bazookas, which is all very fitting as the game takes a turn away from the fantastical green hills of DeathSpank and replaces them with the dangerous jungles and battlefields as the human’s take on the hoards of Greem and Orques invading the land. 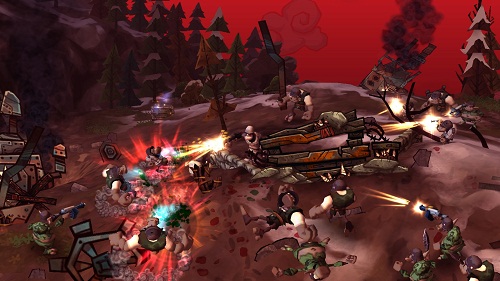 A great new addition to DeathSpank: Thongs of Virtue is the fantastic downloadable content to extend your game further, initially free to download, The Snowy Mountain Dungeon adds a new dungeon to the game that extends the gameplay slightly, and Tankko; a new friend for local co-op, Tankko is a rather strange Spider-Man but in the ugly sense when Peter Parker transformed into a huge spider. With the inclusion of the DLC this then gives your local friend the chance to play as Sparkles the Wizard from DeathSpank, Steve the Ninja -new to Thongs of Virtue-, and Tankko the spider-man. So if your friend wants to be a pink-robbed wizard, tiny ninja dude on a horse or grotesque spider warrior they’ve mountains of choice!

If Hothead Games have done it on purpose is one question, but DeathSpank is perfect episodic material, the gameplay is solid, -as much as some people will complain- and the addictive one-more-quest mentality is abundant in DeathSpank, so much so the series would translate perfectly into episodic chunks, it practically has already! However what Hothead have planned for the title is up to them, but we would love to see much more of DeathSpank in the very near future. 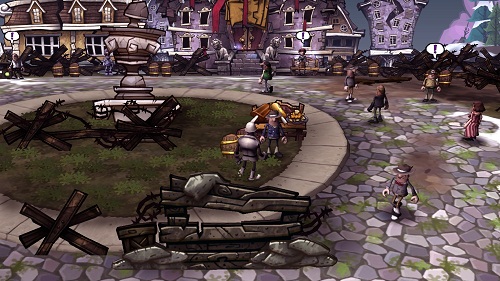 The only real niggle with DeathSpank: Thongs of Virtue is that the soundtrack is somewhat the same, you've got the same intro music which as addictive as it is, doesn't feel as suited to the gritty war-time Thongs of Virtue as it did in the happy green hill of fantasy DeathSpank, granted a new soundtrack was created for the game, but it doesn’t seem very obvious, and you’ll often hear recycled music from the first game.

Hothead have added to a relatively successful formula with DeathSpank, do not expect any new innovations of technology, instead think of DeathSpank Thongs of Virtue as more of an extension to the original, while the gameplay is a justified 15 hours as it should be, apart from new laughs you will not find anything different at all in this thoroughly enjoyable downloadable title. Basically if you loved DeathSpank, you’re going to love Thongs of Virtue. 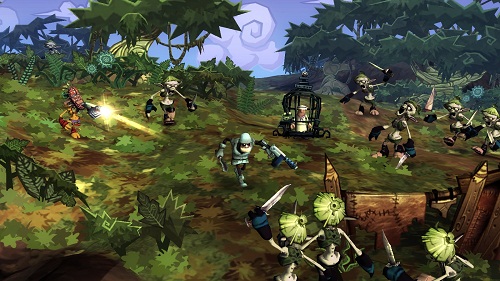 DeathSpank: Thongs of Virtue is available now on the Xbox Live Arcade and Playstation Network for 1200 MS Points and £9.99 respectively.

Also DeathSpank is coming to PC! Steam are currently running a pre-order offer for Shank and DeathSpank, check it out here, Both are released October 26th.